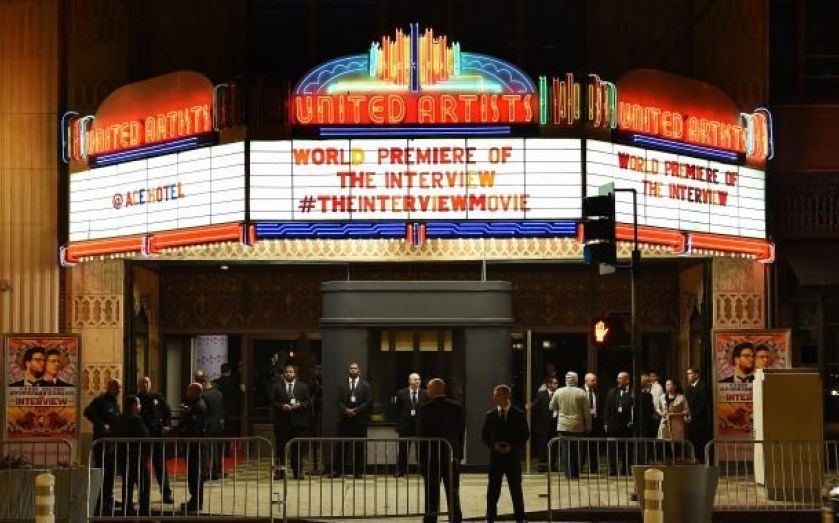 “The holiday season”, as it’s referred to in the film industry, is supposed to be one of the most lucrative periods of the year for Hollywood studios.
Yet for Sony Pictures, hopes for a bump in its Christmas stocking have been hit by the insidious cyber-attack which has pushed it to cancel the release of new film The Interview and could potentially cost it up to $300m.
The action-comedy caper, starring Seth Rogen and James Franco, depicts two CIA agents plotting to assassinate president Kim Jong-un, leader of North Korea.
For the last three weeks the company has suffered through troves of its most confidential and compromising information being made public. A group calling itself the “Guardians of Peace” has claimed responsibility, but the US government is reported to suspect North Korea.
As the nature of the threats have become more sinister, the more the company’s bruises have deepened.
Sony Pictures has now felt compelled to withdraw the film from cinematic, home video and video-on-demand release, after a threat by hackers to attack screenings of the film led to the largest cinema chains in the US to announce they would not be showing it.
The Interview cost Sony around $42m to produce and a further $40m to promote. As things stand, the studio currently has no plans to make that money back from the film.
By cancelling the release of The Interview (for now), Sony is not only effectively waving goodbye to millions it spent on making the film, it is also going to miss out on what would have been most likely have been a pretty healthy profit.

How much could The Interview have made at the box office?

As already mentioned, studios save some of their biggest releases of the year for the “holiday season”, defined as the first Friday in November through to the first weekend of the new year. Over the last 10 years, the average film given a wide release in the season has made $34.95m at the US box office, beating the average $33m made by those released in the summer.
The chart below demonstrates just how important the period is to Sony’s annual box office revenues in particular. With the exception of 2010, it has been the second most lucrative period after the summer months in four of the last five years.
The Interview would surely have played a major role in Sony's seasonal slate this year. As far as comedy stars go, James Franco and Seth Rogen are as close to safe bets as you can get. On average Rogen’s films have made $97.1m at the box office, while Franco is not far behind on $65.7m.
The Interview director Evan Goldberg’s last film, This is the End, was also the last time the pair starred together. It earned just over $100m.
Over on FiveThirtyEight, Nate Silver looked at how films of a similar genre and certificate have fared, and surmised that The Interview could reasonably have been expected to generate at least $100m. That seems fair, and maybe even conservative. After all, none of the films that fell under Silver's category were even released in the lucrative holiday period.
On top of costs from cancelling The Interview, Sony will also have to start thinking about clearing up the mess left behind by the hackers. According to the founder of a cyber security firm spoken to by Bloomberg, that could take a further $100m out of its pockets.
None of this is to say that Sony should have ignored threats to life in pursuit of a box office bonanza or to avoid losses of hundreds of millions of dollars. But what’s clear is if the hackers wanted to materially damage the company, they have succeeded.

If Sony Pictures can take one modicum of comfort from the whole sorry affair, it’s that prior to being descended on by the Guardians of Peace, its studio had been enjoying a pretty good year. Its total of $1.2bn from 40 films is its highest gross-per-film since 2000, with an average $30.9bn per movie.
With the hackers apparently not as bothered about US audiences going to see Annie, there’s still time for Sony to add to its box office take for the year and reclaim some of that Christmas cheer. Unfortunately for Sony, it has – like pretty much everything else belonging to the company – already been stolen and released.

So, who should Sony blame?

According to reports in the US media, senior government officials believe North Korea were behind the attack.
NBC News has quoted a government source who claims the administration has “found linkage to the North Korean government” while The New York Times claims that the government is certain of North Korean involvement, but unsure of how best to respond. Would a public accusal risk further escalating the situation?
North Korea has publicly sounded its displeasure at the film before. In April, North Korea ambassador Ja Song Nam wrote to the UN secretary-general Ban-Ki Moon decrying the film as “the most undisguised sponsoring of terrorism as well as an act of war.”
However, some have already poured scepticism on the level of North Korean involvement. Kim Zetter points out in Wired that not only are hackers generally adept at covering their tracks and leaving false flags, initial contact with Sony made no mention of North Korea, Kim Jong-Un, nor The Interview.