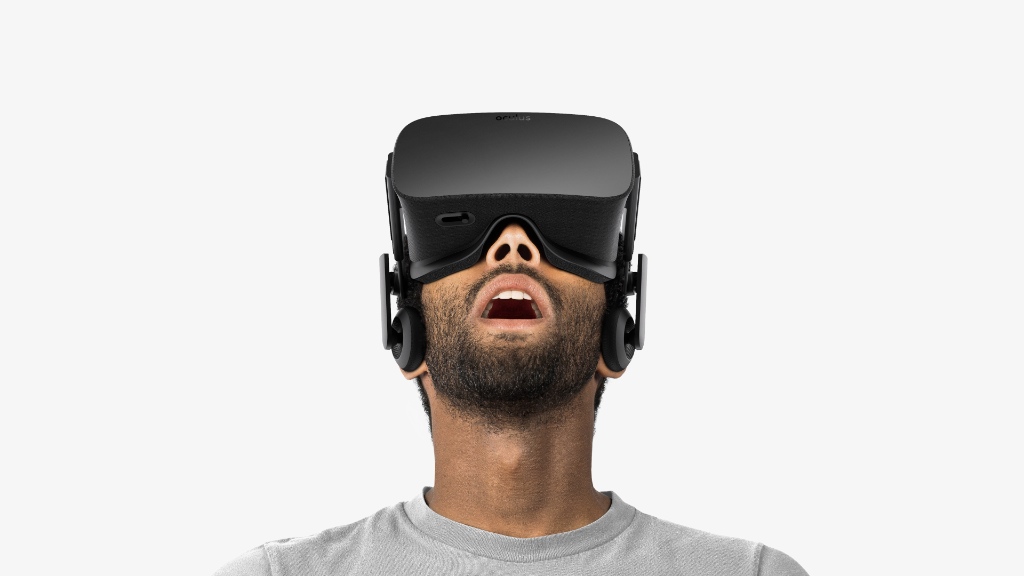 When the iconic red-bricked turbine halls of south London’s Battersea Power Station first fell into dereliction more than 30 years ago, videogames were in their infancy. The primordial graphics technology of the 1980s could only produce a handful of colours and basic, blocky images, reproducing scenes no more visually complex than a single asteroid tumbling through space, or an anthropomorphised egg somersaulting across a two-dimensional meadow.

But today, as the 42 acre industrial site undergoes its gargantuan £8bn redevelopment, game technology has become advanced enough to assist Battersea in a surprisingly innovative new way, by providing it with an immersive virtual reality marketing suite. No longer are potential buyers limited to flicking through brochures of static photography or watching linear video walkthroughs, instead they can pick up a game controller and take a virtual stroll around the completed site.

The technology, developed by Shoreditch-based CG studio Cityscape Digital, has used the architect’s plans to directly map the first phases of construction with to-the-centimetre accuracy. That means you can walk along the completed Electric Boulevard, the planned high street connecting the apartments and power station to the still under-construction Tube station. Still a giant muddy hole in the ground in reality, the station appears in this pristine virtual world as a finished project, as do the trees of Gehry Park, the rooftop gardens designed by Foster + Partners and the interior spaces of the restored power station. You can even make a dry run of the route from your apartment to the local bakery to time how long it might take you to pick up a sourdough loaf.

“From a development perspective,” says Georgia Siri, UK sales director for Battersea, “what we’ve done here is groundbreaking. The whole site has been mapped in detail, giving people a real sense of what this space is going to be like. That’s been difficult for us to do in the past, simply because Battersea has been derelict and out of bounds to the public for so many years.”

This isn’t just some novelty either. By inviting people into this virtual recreation, developers can provide buyers with information at a number of different scales, from the sheer size of Battersea Power Station’s interior (it’s possible to see how much of the original brickwork has been preserved just by craning your virtual neck upwards), to walking times between points of interest, to the positioning of individual power outlets and the potential subdivisions of office space on the building’s upper floors.

Tony Pocock, director at Cityscape Digital, says a key benefit to this technology is the ability to rapidly make changes to a site’s design based on immediate feedback from investors, architects, developers and customers.

“The traditional visualisation process is static,” says Pocock. “The designers would dump all of their information at once so we could produce static visualisations of the site, which can take weeks or months, and may even be out of date by the time they’re in the hands of investors.”

Pocock says the new model fixes this. “You can stay in contact with the customer in a very different way and start to shape the product around their changing needs. Because this is a responsive channel, marketing materials are no longer a one way broadcast. We’re talking about being able to run many focus groups at once, because you can push designs out there and really sample the market. That’s extremely powerful.”

Battersea Power Station is not the only developer turning to the power of new technology to help market property. When considering how best to communicate the unobstructed views of London’s skyline from their 42-storey tower development in Stratford, the team at Manhattan Loft Gardens also turned their attentions to virtual reality, this time using the Oculus Rift headset.

Worn on the face like a pair of giant sci-fi goggles, the headset provides an unsettlingly realistic simulation of one of the building’s apartments, and allows you to walk around inside the furnished suite as if you were actually there. The aim is to give buyers a true sense of the dimensions of the space, with particular attention paid to the loft-style apartment’s unusually high ceilings, something that the developer would struggle to emphasise in a physical marketing suite.

This relatively new headset technology is still in its infancy however, and a long way from replacing the traditional marketing suite. “Some of our clients wouldn’t necessarily want to depend on the Oculus for decision making,” says Manhattan Loft head of communications Aynsley Munsie. “Many still prefer being able to touch and feel the space around them.”

The team also note that they have to keep bottles of water nearby, just in case some of their clients are left feeling dizzy by the headset. But while being momentarily teleported into a Lawnmower Man style simulation can be disconcerting, buyers at Manhattan Loft Gardens have been unreservedly enthusiastic about the new technology.

“We’ve had a very positive response,” says Munsie. “The Oculus adds an element of excitement and intrigue. We really believe it’s the way of the future and that other developers are soon to follow suit.”

While virtual reality headsets and bespoke interactive video games sit at the bleeding edge of this technology revolution, elsewhere in the property industry, even the oldest and most fundamental marketing tools are being reinvented. The standard floorplan, a stalwart of any marketer’s brochure, has undergone a radical transformation of late, with an increasing number of agents using advanced photography and mapping techniques to create fully three-dimensional dollhouse representations of their properties. 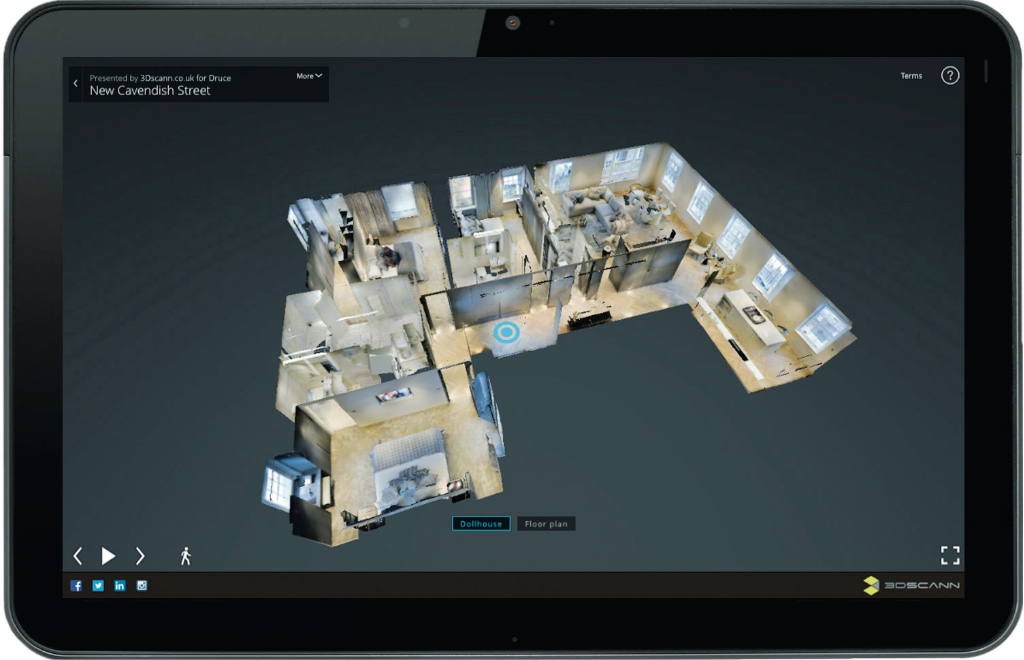 Estate agent Strutt & Parker has worked with design company Matterport to create virtual tours of many of its properties, while agents such as Druce and Keating Estates have built similar walkthroughs with the help of Norwegian firm 3DScann. These tours can be viewed inside a web browser, allowing potential buyers from around the world to view interiors from any angle they choose, stroll through hallways and poke around inside wardrobes. The tech works by placing a series of cameras, sensors and laser scanners in each room to capture an image of the surrounding area in exacting detail. By stitching these images together, a virtual representation of the house can be created – but one that’s a great deal more complex than the basic “Street View” style tours more commonly seen.

“I’d seen so many solutions that try to present property in a new way,” says Robin Lycka, director of 3DScann. “Usually they’re just a bunch of 360-degree photographs that are badly stitched together. The term ‘virtual tour’ has almost become infected by these kinds of walkthroughs, they simply don’t work very well. But 3DScann is something that just works out the box. Anyone who has a space to show can use this technology.”

“Compared to more traditional media like static photos and linear video, this content is dynamic and immersive. You can get your consumer engaged in a completely new way.” Lycka’s statistics show that people spend 12 to 13 minutes exploring their 3D models, whereas with still photos or video they’ll spend just a minute or two. “So you retain your client’s interest for a lot longer.”

Tellingly, these various tech innovations aren’t coming from within the property industry itself. There’s no costly internal R&D being done; instead developers are utilising a handful of emerging technologies, leading to what will be a giant change in how property is marketed to potential buyers. Headsets, virtual worlds, 3D scanners, even drones are soon to become key components in developing and marketing a property.

Developers are constantly looking to the tech industry’s fledgling startups for inspiration, repurposing their inventions as they see fit. The end result is a new catalogue of tools, creating entirely new ways to sell.