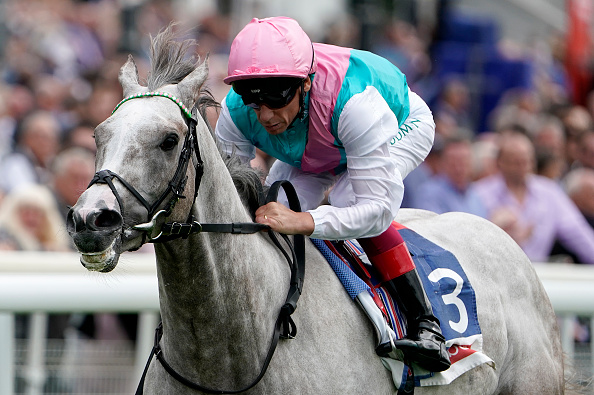 There’s absolutely no chance LOGICIAN, the leading fancy for tomorrow afternoon’s William Hill St Leger (3.35pm), would have had the speed to land a Guineas over a mile, while the John Gosden-trained son of Frankel was just a once-raced maiden winner at the time of the Investec Derby.

Gosden, who has won the St Leger four times, knows when he has the right horse for this race and everything this grey has done over the summer suggests he’s the ideal type.

Big and powerful, scopey in stature and plenty between the ears, Logician looks a stout, athletic stayer with that all-important touch of class, probably inherited from his superstar sire, Frankel.

He still has to step up on what he’s done so far, but we’re seeing improvement with every stride this horse takes and it’s hard not to be in his camp.

His victory in the Sky Bet Great Voltigeur Stakes last time out confirmed that he’s progressing at a rate of knots and, though only even-money with the bookies, he’ll take all the beating.

While the old adage asserts that ‘the best horse wins the St Leger’, you’ll also find a few that have simply out-stayed their rivals to land the oldest Classic on the planet.

Harbour Law, the shock 22/1 winner of this race in 2016, didn’t arrive at Town Moor with a sparkling CV but he was able to see out the testing 1m 6½f well and that counts for a lot.

While Sir Dragonet, the general 3/1 second favourite for tomorrow’s race, isn’t a guaranteed stayer, others at bigger prices certainly will get the trip.

DASHING WILLOUGHBY has a stamina-laden pedigree and is already a winner over the distance.

Andrew Balding’s son of Nathaniel stayed on stoutly to edge out Barbados in the Queen’s Vase at Royal Ascot, and despite disappointing a little when fourth over two miles in the Goodwood Cup last time out, I’m happy to forgive any horse a run at that unique track.

He’s a certain stayer that will be sticking his neck out all the way to the line.

This race has the makings of a true stamina test too, with Franny Norton likely to set a good gallop out in front on Sir Ron Priestley.

That partnership has already produced four wins this season, but this represents a major step up in class, and they’re likely to be mowed down by better horses up Doncaster’s long home straight.

One of those may be IL PARADISO.

Unlike much of Aidan O’Brien’s yard, and particularly the Classic generation, Il Paradiso has somewhat crept under the radar.

Like Logician, he was only the winner of a maiden at the time of the Investec Derby and is a horse that’s been campaigned towards the backend of the summer.

The son of Galileo showed he stays well when winning a valuable 2m handicap at the Curragh by 12 lengths, before running a credible third to Stradivarius in the Lonsdale Cup last time out.

As a winner over 1m4f and 2m, he’s interesting on his first attempt over today’s in-between trip.

O’Brien’s trio of runners is completed by Western Australia, the 50/1 rank outsider and lowest rated runner in the field.

He’s yet to blossom this season and has finished down the field in all of his last three starts.

Though all eyes will be firmly fixed on Logician, there is another grey in the race.

Technician has three wins and a second to his name this season, including winning the Geoffrey Freer Stakes over 1m5½f on soft ground at Newbury last time.

The nature of that win confirmed his stamina, but he still looks up against it in this company.