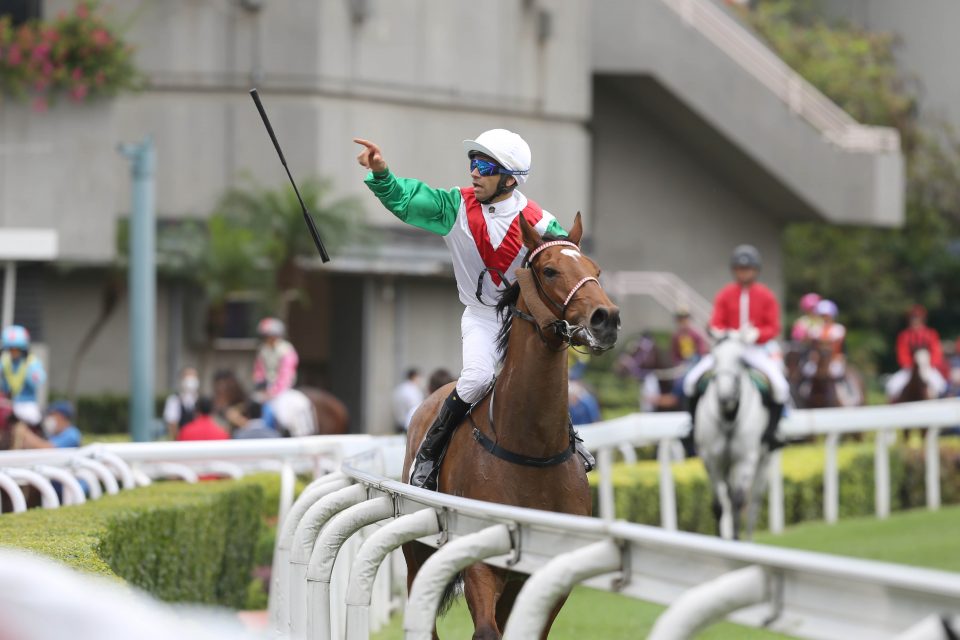 IT SHOULD be ‘normal service resumed’ when jockeys Zac Purton and Joao Moreira square up under the lights at Happy Valley on Wednesday.

Although Purton (127 winners) and Moreira (123) are locked in their high-profile battle to be crowned 2019/20 Hong Kong Champion Jockey, it didn’t go according to plan at Sha Tin last Sunday.

The pair rode 20 horses on the 11-race programme and only had one winner to show between them.

To rub salt into the wounds of their many followers, they rode nine favourites and all were beaten.

Both pilots have a full book of nine rides and it would be inconceivable if they left the inner-city track empty-handed.

The most interesting match-up between the two during the afternoon comes in the Class 2 £200,000 Cochrane Handicap (2.45pm) over nine furlongs.

Moreira climbs aboard the John Moore-trained HELENA BABY who exceeded expectations, having gone off at 143/1, when narrowly beaten by a couple of today’s rivals, Righteous Doctrine and Super Oasis, over today’s trip at Sha Tin late last month.

That was his first try over the distance having raced over six and seven furlongs in an attempt to get him into peak condition.

With Moore a past-master at earmarking his gallopers for the right race at the right time, and Moreira quickly snapped up on a horse who should excel around the tight-turning track, he is going to be hard to beat.

Lying in wait, however, will be the Purton and Caspar Fownes partnership, associated with highly-regarded but as yet still a maiden, Columbus County.

This New Zealand bred four-year-old hasn’t been seen since running in the HK Derby in March, but nevertheless has form which gives him good claims in this contest.

A recent trial, which included the first, second and third placings in last Sunday’s Group 3 contest at Sha Tin, gave enough encouragement to suggest Columbus County will be dashing strongly in the closing stages.

Others to consider are the progressive Righteous Doctrine, who has spiralled 20 pounds in the handicap since February and the useful Reliable Team, who is equipped with blinkers for the first time after disappointing on his last start.