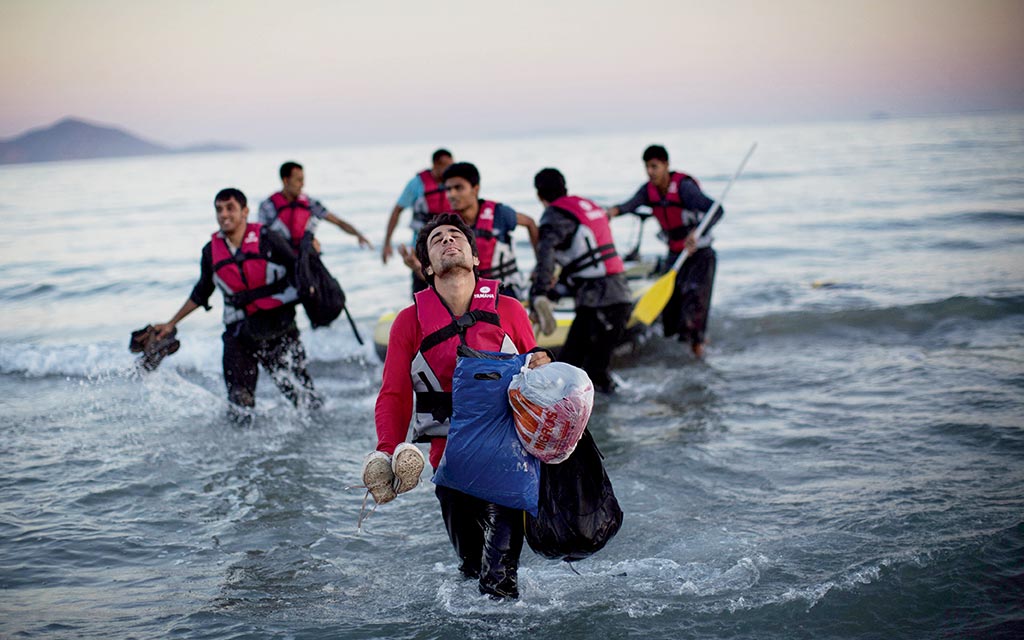 While there have been many causes worthy of our attention in 2015, the plight of Europe’s refugees and migrants has been the most visible. There are currently 20m people feeing violence and oppression around the world and many of them arrived on our continent’s shores this summer in the hope of a better life. Shocking press images of young children and families crossing the treacherous Mediterranean Sea in flimsy lifeboats hit home and led to popular campaigns like Refugees Welcome and Rooms for Refugees that were inundated with support and donations.

Meanwhile, business people in the city were looking on and wondering how they could contribute. Many companies have used their monetary heft and donated large sums to the cause; the UN High Commissioner for Refugees received $17m in donations from the business community in just six days in September, with Goldman Sachs, Ericsson, Volvo, Visa Europe, Audi, Zara and H&M all contributing large amounts. European football teams like Bayern Munich and Real Madrid also got in on the act pledging $1.1m each to the cause.

Unsurprisingly, it was the tech giants who came up with the most imaginative initiatives to show they cared about the plight of refugees; the migration crisis prompted Google to add a dedicated “Donate” button to its search bar, promising to match any donation made up to €5m, Apple donated all profits from a charity song by Crowded House on iTunes, and Uber partnered up with Save the Children, utilising its drivers to deliver donations to the charity free of charge. Meanwhile, staff fundraising schemes raised millions at Ernst & Young, Johnson & Johnson, Pearson and the Swarovski Foundation.

While huge corporate fundraising programmes have undoubtedly brought in the big bucks, other companies have found ways to get new arrivals on their feet once they’re here. Tech industry influencer and editor-atlarge of website TechCrunch Mike Butcher has spent much of the autumn using his network of contacts to establish Techfugees. It aims to rally the close-knit tech community in London around the cause and work together to help refugees find their feet in a new country and trace their families, which in many cases have been scattered by conflict.

London’s tech cluster really came out for the cause. In the first 48 hours, Techfugees’ Twitter and Facebook page picked up over 2,000 followers and it held its second conference this month to expand its network around the globe. Its hugely successful hackathons – not-for-profit events that bring tech engineers, entrepreneurs and startups together with NGOs to thrash out software solutions to common refugee problems – have also been instrumental in producing some impressive social enterprises and partnerships.

Two sponsors include family history website Findmypast.com, a company that uses Big Data to enable individuals to search public records for information on lost or historical family members. Needless to say, it’s brought untold expertise to the cause, along with Skillsmatter, an online community that promotes sharing skills in software craftsmanship and progressive technologies.

Some of the most interesting apps to emerge include Migreat, which helps refugees navigate the complicated EU visa applications system online, GeeCycle.org, a site where people can recycle their old mobile phones to refugees, Refugees on Rails, a coding school for refugees that recycles old laptops and Refugee Aid App, a crowdsourcing campaign to create an app that’s a one-stop shop for all the services new arrivals will need depending on the location they’re based. The company says the software is 90 per cent built but it needs £10,000 to pay part-time staff to run it for a trial period of six months.

Even closer to home, Brazilian national and serial entrepreneur Rafael Dos Santos is set to open Mi-Hub near The Gherkin. It’ll be the first international workspace of its kind in Europe when it opens next month as a 6,700sqft office space that’s specifically geared up to help new arrivals set up their own business.

Funded by social enterprise This Foreigner Can, hotdesks are available in the heart of the City for £320 or £199 for the first month if tenants sign up by the end of the year, with private offices also available. The price also includes a flexible rolling monthly contract, all bills included in the price, stationary, furniture, access to showers and kitchens and free training and networking workshops run by City businesses at the weekends. Dos Santos set up the organisation to address some of the problems he found while trying to set up a business when he moved to the UK 10 years ago.

“The number one thing that migrants find difficult is funding,” says Dos Santos. “Migrants don’t have credit history so it’s very, very difficult to get a bank to lend anything to you. Contacts is number two; obviously, migrants will turn to those in their own communities first but they don’t have the knowhow either. Information and knowledge is number three: 90 per cent of people I’ve spoken to don’t know what Companies House is, for example.

“Language is also a huge barrier. When you move countries and they don’t speak your first language, it’s a huge knock to your confidence. Especially if you want to start a business, you’re really aware if you’re mispronouncing what you’re saying and if you sound funny when you want to be taken seriously.”

This Foreigner Can recently held an event at London’s Google Campus, where 300 migrants turned up to see how they could start a business, and another Dragon’s Den-style event is in the pipeline, where people have 10 minutes to present their business idea on stage for the chance to win a £500 cash prize.

But it’s not just about funding and office space, says Dos Santos; what these people really thrive on is community. “It’s about being around people who are in the same position and sharing contacts, tips and ideas that will benefit everybody.”

The migration crisis may be the worst our generation has ever seen, but it’s a great reflection on London’s corporate culture that it’s finding increasingly enterprising ways to rise to the challenge.