Have the Conservatives really halved the deficit? 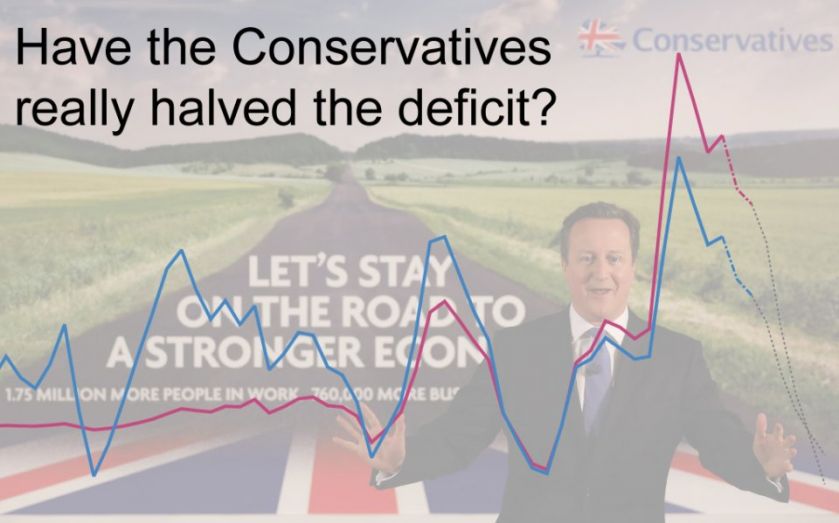 There has been a lot of fuss around the Conservatives’ new campaign poster, in which the party claims to have, among other things, halved the deficit.

Fraser Nelson, the editor of The Spectator, was quick to point out that the claim only holds if a specific measure is used – deficit as a percentage of GDP – rather than the raw figure. The Conservatives, Nelson says, didn’t specify which measure they were using, which is disingenuous.

The budget deficit is basically the amount the government has to borrow to meet spending requirements, or receipts minus expenditure.

This graph shows the debate quite clearly. The red line shows debt and GDP as real, full-blooded numbers. A fall from £153bn in 2009/10 to £91.3bn in the Office for Budget Responsibility’s (OBR) forecasts for 2014 is not a halving.

It should be pointed out that the Conservatives pledged to eliminate the structural deficit, a long term imbalance between income and expenditure, by the end of the parliament.

The horizontal lines show the "budget halved" thresholds. When solid lines turn dotted, they are forecasts. The dotted grey lines show predictions for the next parliament.

The main reason the deficit isn’t falling is a lack of tax receipts, as the OBR said:

Wage and productivity growth have once again disappointed [in 2014], while national income and spending have outperformed most in those areas that yield least tax revenue.

For these and other reasons, [there was] a sharp fall in the amount of tax raised for every pound of measured economic activity [in 2014]. As a result, despite strong economic growth, the budget deficit is expected to fall by… around half the decline we expected in March.