Hamilton: I toasted title with watermelon juice not bubbly 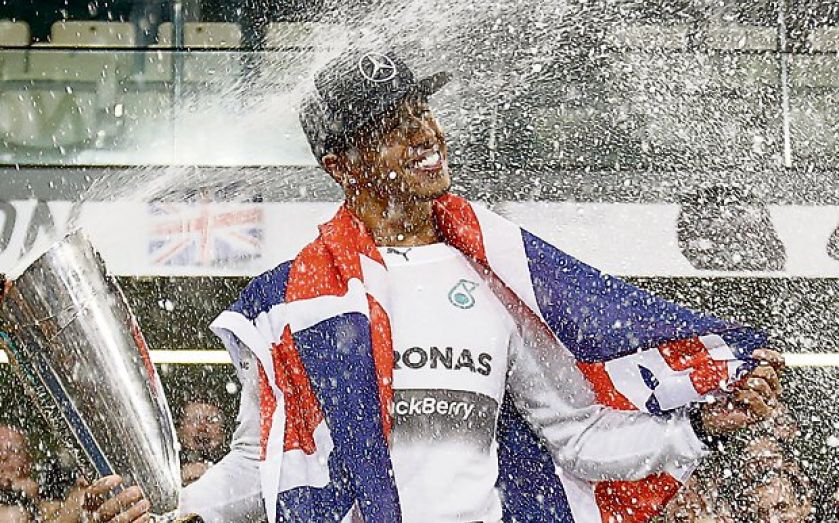 Britain’s new F1 champion stayed sober for second title celebration CHAMPAGNE may have rained down in the immediate, giddy aftermath of his Formula One world championship victory, but Britain’s Lewis Hamilton insists that is as boozy as Sunday’s title celebrations got. The clean-living racer from Stevenage revealed yesterday that he toasted his second title with a glass of watermelon juice – his drink of choice – and, later, a few sips of cognac. Instead of hellraising it was instant chicken soup on the menu, as Hamilton and his family reflected on the humble pre-race meals of his karting days following his triumph in Abu Dhabi. “I feel fresh. I only had one drink on Sunday night, which is more than good enough for me. I don’t drink champagne. I had a watermelon juice at dinner, which is my favourite,” Hamilton said. “Then when I was at the party there was some kind of cognac thing. I generally drink cognac, so I poured a little bit in, but it didn’t taste very nice, so I had a couple of sips and that was it. “I had a great evening. It was quite busy at the track, there was so much energy within the team which has been through so much, even way before I came here. The happiness within the team was amazing to see. “Then I came back with my family and had a nice dinner and reminisced over all the different things we had experienced over the years. “We talked about sitting in the back of the trailer with flasks of chicken noodle soup and sitting by the gas heater; shaking my dad’s hand before heading out on track – all the stages we went through. “Then I popped out to the party. All the team were there. Everyone was enjoying themselves with all the stress and worry gone, seeing people in the happiest moment of their lives.” Hamilton’s triumph with Mercedes came six years after that maiden title at boyhood team McLaren, and the 29-year-old admits that he is only now able to appreciate the scale of his achievement. “Winning the first title was exceptional, an incredible feeling, achieving the life-long goal of becoming a Formula One world champion,” Hamilton added. “I don’t know if I was in the place to embrace it and absorb it in the way I am today. I’m in a different stage of my life. It just feels sweeter now I am a bit older; very, very special, and very much a humbling experience.” Hamilton says he may yet let his hair down in the coming weeks, as he plans to continue celebrations in more private surrounds where his actions are not being as closely scrutinised by motor racing fans. “Everyone has phones these days,” he said. “I didn’t want to be walking out of the club – and it was all Formula One fans there as well, so I was constantly being snapped. “When I get home I’ll be with all my friends and family and then I can go all out if I want to, and they will have the memories and the shots. I also didn’t want it to be a one-night thing, I want it to be over a long time.” HOW BRITISH SPORT STARS CELEBRATED He may have the diamond earring, tattoos and pop star girlfriend, but that’s as far as Lewis Hamilton’s playboy inclinations stretch – if drinks are anything to go by. The 29-year-old does not like champagne and says it takes him “days” to recover, so chose healthy watermelon juice when celebrating his F1 title on Sunday. Andy Murray literally and figuratively went to town after winning his first grand slam, the 2012 US Open. The Scot splashed out almost $6,500 on dinner and drinks for him and his entourage at the Manhattan branch of swanky Asian restaurant Hakkasan, although his beverage – a sensible lemon soda – came to just $6. Not for Andrew Flintoff the rehydrating qualities of fruit juice or carbonated water. When he and England cohorts won the 2005 Ashes they partied like the 18-year itch it truly was, with a 36-hour party that took in a £34,000 nightclub bar bill, countless bottles of champagne and beer and, for Flintoff, a stumble outside Mansion House.