Greed film review: Steve Coogan sets out to prove greed is not good 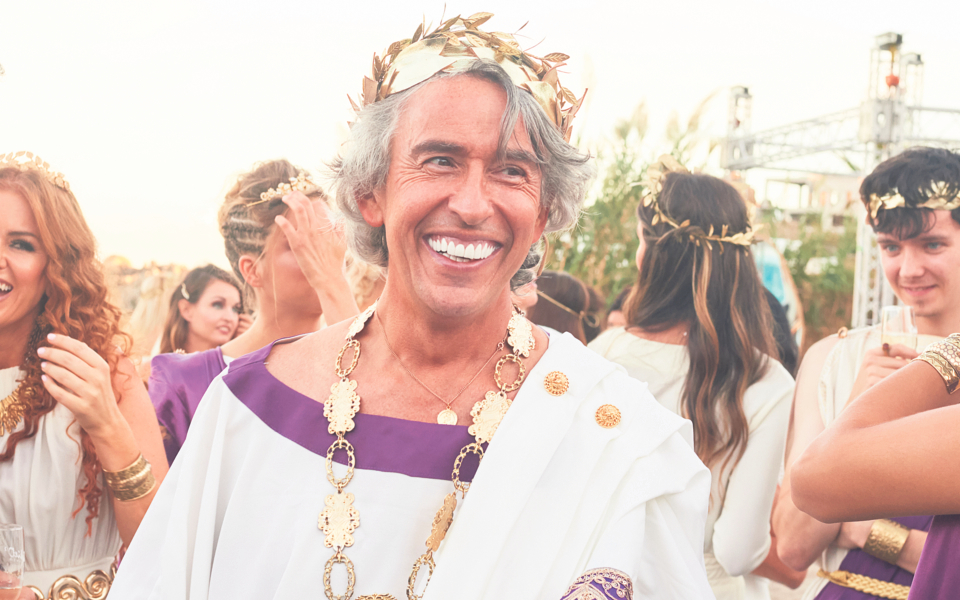 I’m a member of an very in-exclusive club: people whom Sir Philip Green has called a c**t. There was no real malice behind it – I was writing a story about his fashion brand and that was simply the way he spoke to the media. Still, there was something  cathartic about watching Michael Winterbottom and Steve Coogan turn the tables and, essentially, call Green a c**t over and over and over again for more than 100 minutes.

Winterbottom, you can safely say, does not like Big Phil (Green is never explicitly mentioned but the veneer of fiction is so thin you can hear the anguished cries of his legal team). This is not a nuanced character study about a flawed genius, or a gentle send-up of a knowingly-ludicrous figure like Tony Wilson, as in Winterbottom’s 2002 film 24 Hour Party People. No, this is an aggressive hit job that revels in lampooning the retail boss, almost masturbatory in its gleeful tearing apart of its protagonist.

It tells the story of Richard “Greedy” McCreadie, an obnoxious nouveau riche hustler who, after being kicked out of his posh boarding school, embarks on a career as one of the progenitors of fast fashion. He builds an empire on a mountain of debt, siphoning off value and allowing businesses to go belly up, then upgrading to even bigger, more heavily leveraged  projects. It’s not about wealth, he growls, so much as the perception of wealth.

We meet him in the wake of a grilling by the Parliamentary Select Committee, which objected to his asset stripping and payments to non-dom family members (these scenes are recreated almost verbatim from Green’s testy performance in front of MPs, right down to his request that one of the panel “stop staring at me”).

Much of McCreadie’s story is told through flashbacks: ripping off his classmates with card tricks; decking out his flimsy clothes stores in migraine-inducing fuchsia; playing hardball with suppliers, including Sri Lankan sweat-shop bosses.

Read more: The Lighthouse film review: Robert Pattinson and Willem Dafoe shine in this tale of madness at sea

At Greed’s heart, though, lies a metaphor the size of the Colosseum. McCreadie is hosting a huge party for his 60th birthday, the centre-piece of which is a hastily-constructed amphitheatre (built, of course, using cheap, imported labour). McCreadie literally becomes his own Julius Caesar, while his staff (and a bunch of Syrian refugees he swindles) are cast as slaves, to be fed, perhaps, to the very real lion sulking in a cage.

Coogan is a plausible and charismatic McCreadie, as you’d expect from a man who’s fashioned a career playing unlikeable men, although his dazzling prosthetic teeth occasionally threaten to outshine him.

Read more: Steve McQueen at Tate Modern review: Dramatic retrospective muses on what it means to be human

Tonally, though, Greed is a jumble. Sometimes it’s a straight-forward satire, a sort of Death of Stalin for the fashion industry. But Winterbottom wants to impress upon you that this is not, in fact, a laughing matter. To this end, there’s a decidedly un-satirical sub-plot involving the daughter of a Sri Lankan textile worker, presumably written to be the moral anchor of the piece, but which feels like it’s been parachuted in from a different movie. There are also enthusiastic but jarring nods to the slick infotainment mastered by Adam McKay in The Big Short, with jazzy montages explaining the malignancies behind fast fashion.

Greed, appropriately, is good. Never great – just good. It’s a decent romp with some laugh-out-loud moments, but it doesn’t hold a candle to Winterbottom’s best work. In the end, it’s a cold, heavy-handed film, completely lacking in subtlety. I suppose that’s what you get when you base a film on the life of Sir Philip Green.