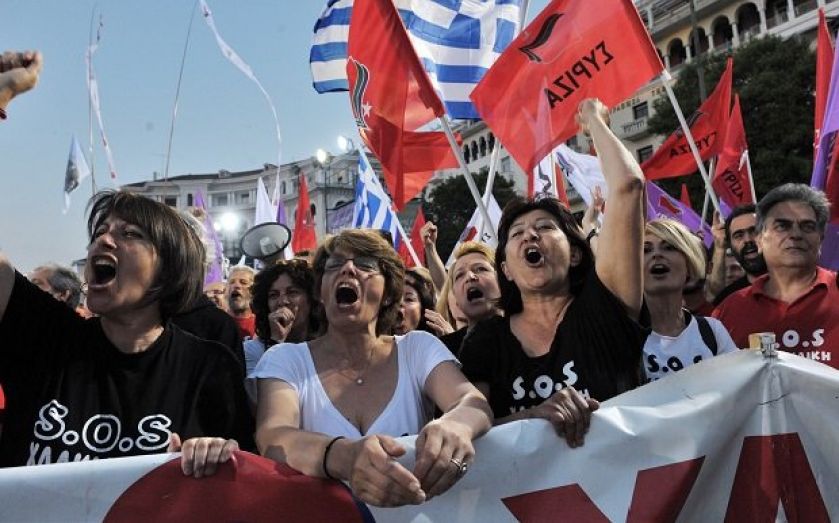 Today is Greece's general election.
Until 7pm, polling stations will accept votes on whether the current New Democracy party remains in power or is replaced by another party.
According to the polls, it looks likely that the radical left-wing Syriza party will be the ultimate winner. In terms of economic policies and the recovery of the Eurozone, this could spell disaster.
Syriza's leader, Alexis Tsipras, wants part of Greece's huge €320bn (£239bn) debt written off and austerity measures revoked, and he intends to renegotiate the terms of the country's bailout with its Troika of international lenders – the European Union (EU), International Monetary Fund (IMF) and European Central Bank (ECB).
He says he will restore "dignity" to Greece by rolling back on job cuts which have left half of the country's youth in unemployment.
Antonis Samaras, current Prime Minister and leader of centre-right New Democracy, has imposed tough austerity on Greece in return for loans from the EU. But many Greek people feel they are not benefitting from the measures, with the economy shrinking by 25 per cent since the start of the Eurozone crisis.
The appeal of Syriza's radical policies to the disenchanted Greeks is clear: an average of opinion polls conducted between 11 and 18 January shows that it is in the lead with 35.1 per cent of intended votes. New Democracy comes in second place with 35.1 per cent, while all other parties fall much further behind.

Fears of a Grexit

While Tsipras has maintained that he wants Greece to remain part of the single currency, there are fears among Eurozone debt holders that a Greek exit, or “Grexit”, lies ahead if Syriza takes over – it is considered likely that Greece will default on its debt, forcing it to leave the Euro. Such a withdrawal would be deeply damaging to the other 18 members of the Eurozone, since there would be significant losses on the loans paid out by other countries.
Not only that, but it has the potential to set off a trend of other economically weaker members deciding to not adhere to bail-out plans. This is especially likely if Greece is successful in its dealings with the lending troika, since anti-austerity populist parties in other struggling countries may start to gain momentum as more of the population see them as a way out of economic difficulty.
A more immediate concern is that a bank run could take place tomorrow if Syriza wins, with savers rushing to withdraw large deposits. There is already evidence that those holding large amounts of money in Greek banks are transferring it abroad – in December last year, lenders lost €2.5bn because of this.