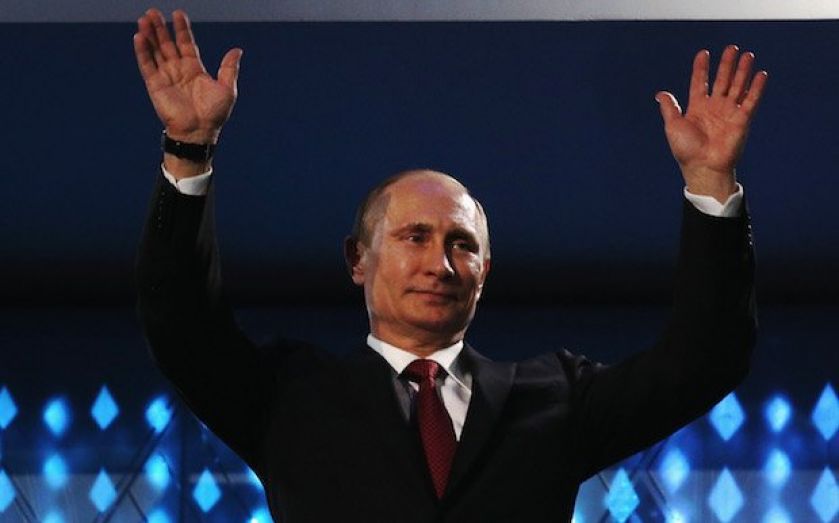 CALAMITIES often serve a useful purpose in foreign policy, overturning intellectual sacred cows that – until they so dramatically reveal themselves as unfit for purpose – pass for received wisdom. The long-held leftish shibboleth of interdependence presently seems ripe for the chopping block. This cherished nostrum declares that, since countries’ economic affairs are intertwined, mainstream states connected to the global economy will not dare disrupt the present order. Not only do they have so much to lose, but the other great powers of the global establishment also have so many tools to destroy them.

Russia’s annexation of Crimea puts paid to the first part of this theory; what is happening now could spell the demise of the second assertion. Ironically, interdependence – the very factor many were assuming would keep us all at peace – is endangering it, gumming up the West’s ability to respond to the Ukrainian crisis.

In response to the Kremlin’s lunge for Crimea, President Obama has put in place a sanctions regime designed to be ratcheted up if President Putin causes further trouble by invading either Moldova or eastern Ukraine. If he comes to his senses, the minor sanctions now in place will be all there is. However, if Putin is truly determined to upend the regional status quo, real economic pain – easily dealt out as Russia is enmeshed in the global economic order – will follow, leading to his ruin.

So far, so good. However, this modus operandi only works if the Europeans come along. Obama’s strategy is wholly dependent on them doing so, which is highly problematic given that the forces of interdependence – having proven so useless in deterring Putin – seem to be having a more marked effect on European decision-making. European trade with Russia is 11 times that of America’s. Europe seems more worried about the coming joint economic pain that further sanctions would unleash than is the Kremlin.

Further, interdependence helps the Kremlin in two basic ways. First, it continues to give Russia the whip hand over Ukraine, however many economic deals Kiev chooses to sign with Brussels. Ukraine depends on Russia for more than two-thirds of its gas. And the screws are tightening. Gazprom has asked Kiev for $500 per 1,000 cubic meters of gas, about one-third higher than what it charges to customers elsewhere. Having subsidised the Ukrainian economy for years, Russia certainly has the power – as the country’s chief gas supplier, creditor, and trading partner – to cripple Ukraine whenever suits.

Second, pivotal Germany will largely determine just how weak (or firm) Europe’s overall response to Russia will be. Due to its very strong economic ties to the Kremlin, it is more than an open question as to whether Berlin is prepared for the real pain that would result from a serious sanctioning of the Russian bear.

German trade with Russia is by far the largest within the EU, fully three times greater than that of second-place Italy. It is estimated that a whopping 300,000 German jobs are directly dependent on trade with Russia. Germany is the single biggest consumer of Russian gas, taking one-fourth of the country’s exports, and receiving 40 per cent of its gas and oil from the Kremlin. Due to interdependence, the cautious Angela Merkel has an awful lot at risk, calling into question whether Europe can live up to the White House’s overly sanguine expectations.

So rather than gormlessly lauding interdependence, Europe must scramble to find ways to disentangle itself from Russia’s suffocating embrace. Following the Baltic states’ lead, frantically constructing LNG terminals to receive hoped-for American unconventional gas is part of the answer, as is removing restraints on fracking in the UK and Poland. In addition, increased supplies of oil and natural gas from politically friendly places like Norway and Holland must be quickly nailed down.

Finally, even if it hasn’t stopped Putin so far, interdependence does offer one glimmer of hope; the markets – which recognise no country – are beginning to give the Kremlin fits. Capital flight in Russia could reach $70bn in the first quarter of this year, and the ruble has lost 11 per cent of its value in 2014, a swoon that may call for further interest rate rises, which in turn would knobble Russian growth. There is no doubt interdependence is imperiling a strong western response to Putin; the only consolation is that it is also beginning to come crashing down on Russia itself.

Dr John C Hulsman is a senior columnist at City A.M., and president and co-founder of John C Hulsman Enterprises (www.john-hulsman.com), a global political risk consultancy. He is a life member of the Council on Foreign Relations, and author of Ethical Realism, The Godfather Doctrine, and most recently Lawrence of Arabia, To Begin the World Over Again.