More women are joining the boards of Britain’s most powerful companies, but there’s a big difference between different industries, a breakdown by sector reveals.

But progress is being made: last week FTSE 100 companies reached their target of 25 per cent female directors.

But while retail companies have one-third female boards, mining companies land at just over half that, with 17 per cent women.

“I think the sectors that are more behind need to think ‘why would diversity be good for our business?’,” Maggie Stilwell, managing partner for talent at EY, told City A.M..

“Once businesses work out why diversity is important to them, they can start being a little competitive about it.”

Some studies have shown there may be a business case to be made for diversity. McKinsey’s report “Diversity Matters” found the most gender-diverse companies were 15 per cent more likely to outperform the least diverse.

The composition of boardrooms has changed dramatically in recent years, with female directors doubling in the four years since Lord Davies set companies a target of reaching 25 per cent women on boards by 2015.

And after Glencore appointed Patrice Merrin last year, there are also no longer any male-only boards at FTSE 100 companies. 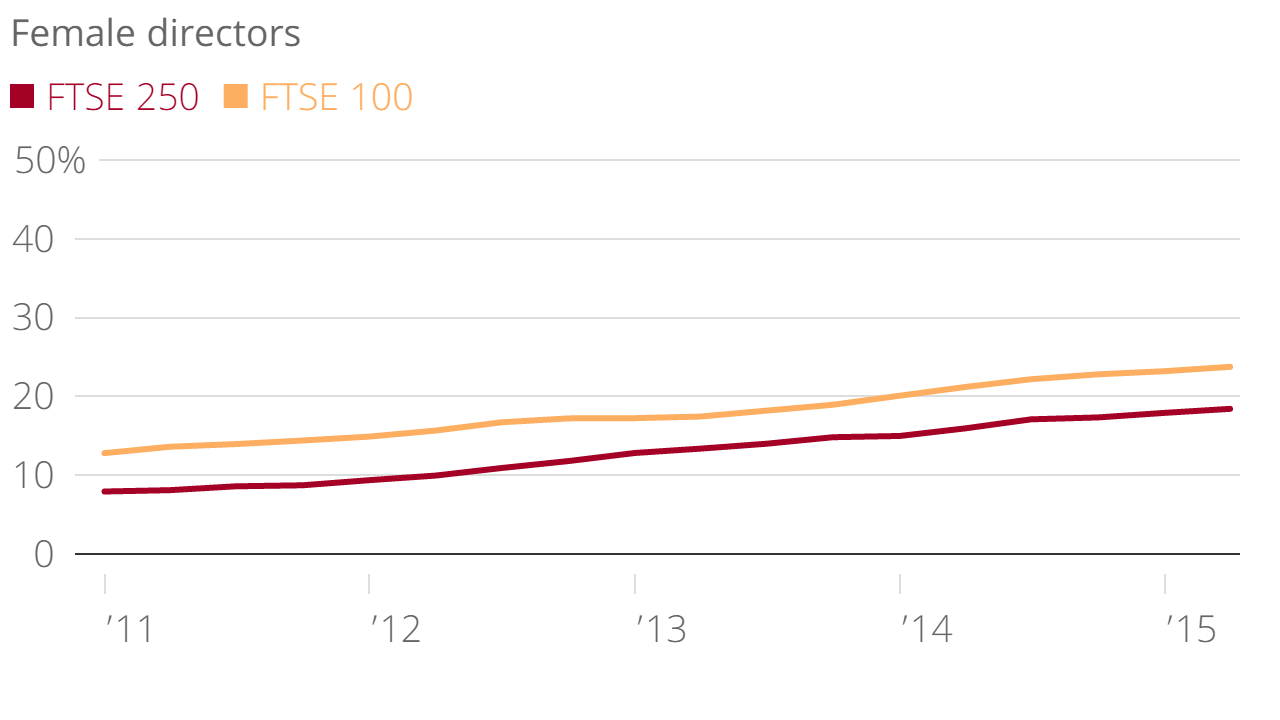 Aki Stamatis, chairman of interiors specialist Fourfront Group, sees encouraging women to take on senior roles as a way of developing the organisation.

“A female perspective is different from a male’s, often giving a business a more rounded overview. It adds enormous value to clients, and can often save money by offering a different way of doing things and creates a better working environment,” he told City A.M..

To this end, Stamatis launched initiative Women in Fourfront specifically to get more women into senior roles.

“Essentially it’s about enabling people to be the best they can be. And this approach is paying dividends as we now have female contract managers and representation at board level; something which is rare for a medium-sized firm in this sector.”

Smaller companies lag some way behind Britain’s blue-chip firms, but boardrooms are changing here too. FTSE 250 companies now have 18 per cent female directors, and are expected to hit 25 per cent within the next two years.

Lord Davies commented that the rate of change has been “remarkable”:

The voluntary approach is working, boards are getting fixed. We now have to increase the low number of chairs and executive directors on boards and address the loss of talented, senior women from the executive pipeline.