Fresnillo said revenue fell 12.5 per cent to $1.41bn in the year ending December 2014, down from $1.6bn a year earlier. Pre-tax profit at the precious metals producer fell 40 per cent to $251m primarily due to plummeting silver and gold prices, as well as higher production costs.

The company's share price slumped as much as six per cent to 723p at the open in London today. It later recovered somewhat, and was trading down five per cent at 752p in mid-morning trading. 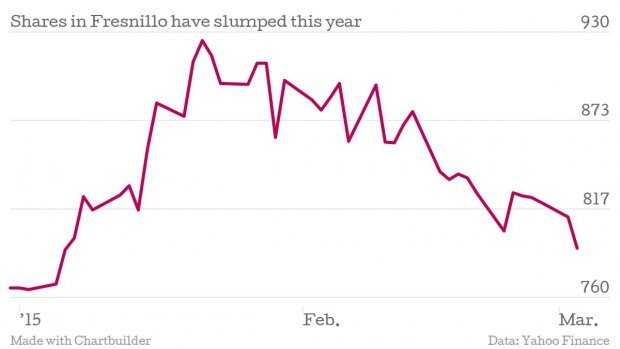 Tensions between Ukraine and the pro-Russian rebels, the Eurozone teetering on the edge of deflation and China's slowing economy are the kinds of things which prompt investors to binge on gold – but this hasn't happened.

"Geopolitics, global security concerns, economic uncertainties and market volatility, which may have driven investors to precious metals as a safe haven in the past, had no direct correlation to prices this year; gold and silver prices were both lower in the year," Alberto Baillères, non-executive chairman, said.

So the company had to gut its spending, cutting costs and taking efficiency measures to make up for this.

"While profit margins declined in the period, cost control measures and certain efficiency improvements allowed us to maintain our position as a low cash cost producer."

Chief executive Octavio Alvídrez said that, while the company had suffered amid low silver and gold prices, cost cutting and efficiency measures had left it in a good position relative to its competitors.

In 2014 we have delivered a reasonable performance considering the lower silver and gold prices that impacted the industry as a whole.

This has again demonstrated that the quality of our assets, the strength of our balance sheet and our conservative approach to creating sustainable value places Fresnillo in a strong position among precious metals producers.

I am hard pressed to recall a time in this industry with such marked uncertainty regarding precious metal prices. While longer term cyclical patterns will likely remain, the short-term factors affecting their behaviour and timing are increasingly complex and opaque.

There is little consensus today on where we are in the current cycle and which catalysts might bear most impact on pricing. In the face of such uncertainties, we choose to be conservative in our projections."

Fresnillo's bottom line was hit by falling gold and oil prices, and while its future performance depends on them, uncertainty means it's difficult to predict what they'll do this year.