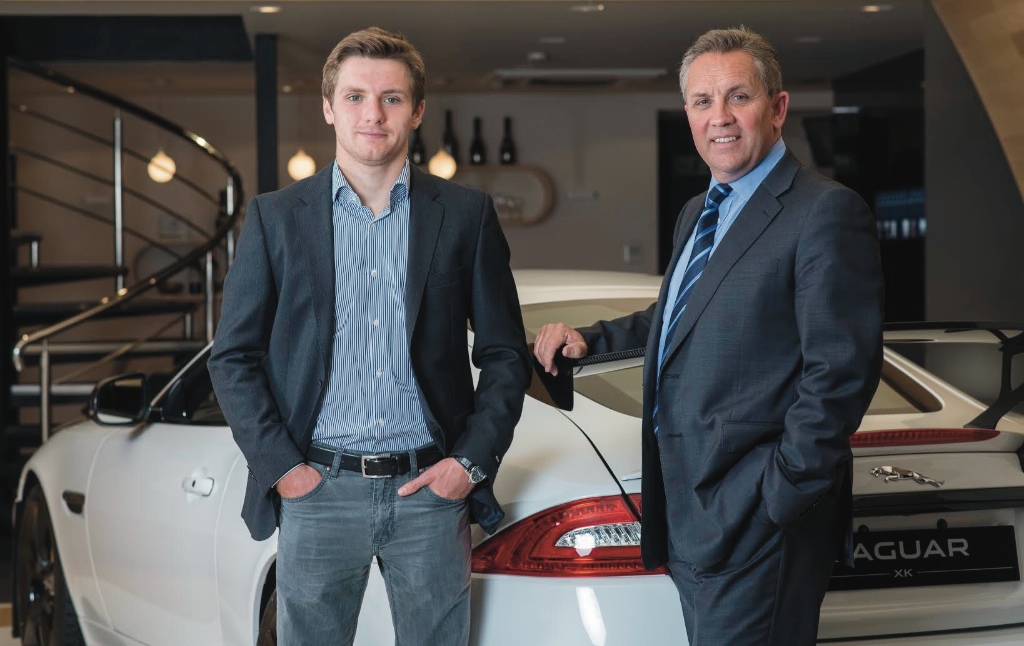 Jordan King is just 22-years-old, but to talk with him you’d think he’d been racing in Formula One for a decade, such is his calm confidence and commercial aptitude. He’s currently contesting F1’s feeder series, GP2, and testing for the Manor F1 team with the hope of stepping up to a race seat next year. It probably doesn’t hurt that his father is former Sainsbury’s CEO turned Terra Firma VP Justin King, a sports mad dad who is passing on his business expertise to his son, and getting to grips with the boardrooms of Formula One himself.

This season Jordan is continuing with top team Racing Engineering, with whom he made his GP2 debut last year, alongside best mate Alexander Rossi, who moonlights as a fully-fledged F1 driver. They were evenly matched in qualifying, with the more experienced Rossi coming out best in race results, but Jordan reckons next year will launch him into the premier league.

Once you prove yourself as an F1 driver you’re showered with riches, but until then these young men are forced to find the money that pays their team’s bills. Jordan’s GP2 seat costs just shy of £1m a season. His father stumps up 35 to 40 per cent of that, but it’s down to Jordan to bring in the lion’s share.

It’s been big bills all the way up the ladder, even when he started in karting aged 12 following a trip to his local track, where onlookers first spotted his potential. “Proper karting is expensive,” says Jordan, who started late compared to F1 stars like Sebastian Vettel. “It starts at £5,000 to £10,000 a year, and without my dad I could never have got started. When I finished school at 18 he said right, this is your career now and you’ve got to do it.”

The young King was at a greater advantage than his peers when it came to sponsorship, thanks to his father’s contacts book, but it was the boy who did the pitching. “I’ve never been to a sponsor meeting for him,” says Justin, 54. Now Jordan has 11 partners, including Hugo Boss and watchmaker Bulova. Deal-making, he says, is something he’s been groomed for.

“Sitting around the dinner table, a lot of the conversation is about business,” says Jordan. “So from a very young age I’ve been open to it. I knew what targets I was shooting at. It’s definitely helped, having him as my dad.”

The economics of racing GP2s – single-seaters, all identical, which look a bit like F1 cars but with a few hundred fewer horsepower – would give any investor a nervous tick. The costs are mighty but the exposure, at least compared to F1, IndyCar, and Nascar is negligible. However, the Kings are selling the vision that by getting in early his personal sponsors will reap the rewards should he step up to grand prix racing. “I’m looking at bringing in partners that want to break into Formula One but can’t afford the Formula One bill, and doing it with a driver to whom they’ll get a lot more access,” Jordan says. “Get involved now and we can start to develop some stuff, and then imagine the story you can tell. We’ll have been on that journey [to F1] together.” 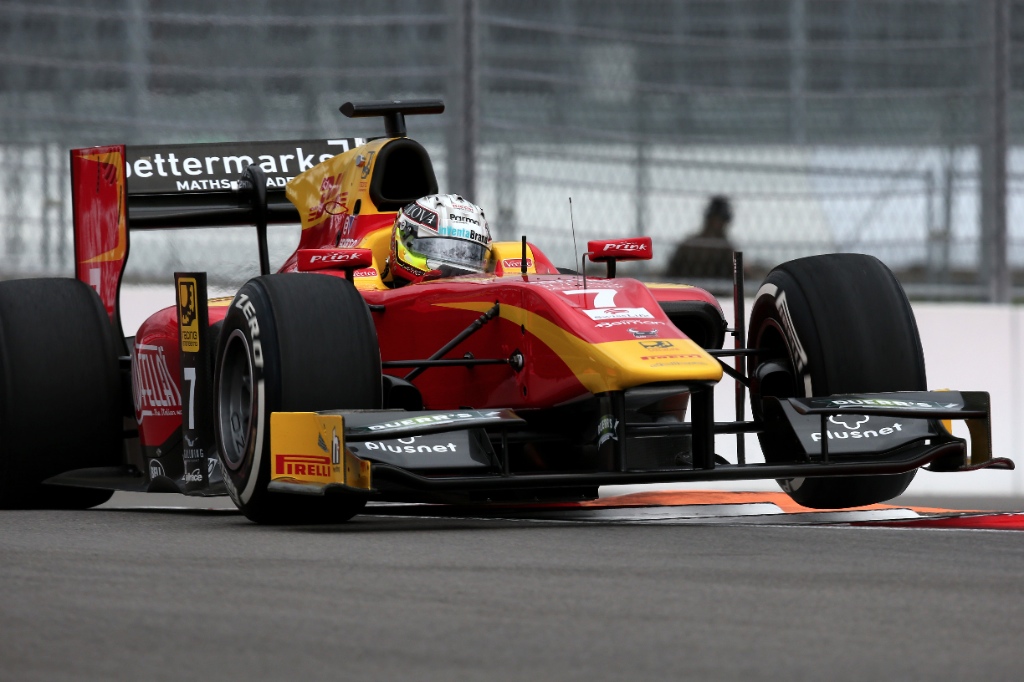 Justin reveals the scale of the challenge, particularly for drivers who don’t have dads who command their own £1m salaries. “Part of the problem for a lot of drivers is that they’re trying to get the whole thing funded from a sponsor. At the early levels of the sport that’s nigh on impossible. Because what you have to offer the sponsor can’t be value for money.”

Jordan was absent from school for a lot of his teens, albeit with permission. Rugby and football mad, he won an all-round sports scholarship to Repton, alma mater of such petrolheads as Jeremy Clarkson and Red Bull F1 car designer Adrian Newey. Clearly supportive of extra-curricular car racing, the headmaster allowed Jordan to be absent from boarding school for four or even five days a week so he could pursue his dream.

“When I arrived at the school [having won a sports scholarship], I realised that I was becoming far more interested in racing than rugby and football. They were fine with that. That’s the type of school they are, they just love sports, all sports.”

“He was a national level athlete until he was 19,” says Justin, “he captained his school at cricket, football, rugby, athletics and cross country. Then he broke his collar bone playing football and missed a chunk of time in the kart as a result. His team read him the riot act, saying he needed to be more serious about karting. That’s when he committed to it. When he was recovering from that accident the sport he missed the most was racing.”

Between the ages of 14 and 18 Jordan raced all over Europe, the Americas, Egypt and Macau. He’d duck out of school on a Wednesday night and return following the race on Sunday. “My teachers would collect all the work I’d missed, so it was very intensive for those two or three days a week I was at school. I had to work a lot harder than the other kids.”

It’s all the more remarkable when you consider that, like three-times F1 champion Sir Jackie Stewart, Jordan is dyslexic. “I found ways around it, but it was tough and quite early on I wrote off English. But in maths and sciences I was really strong. I kind of overcompensated.”

It’s fair to say that Jordan had the flashiest car in the school car park. Thanks to an arrangement with Jaguar he got to tool around town in an F-Type. “After about a year he realised the sponsorship wasn’t worth as much as he thought because he was having to pay the insurance himself,” says Justin.

Not only does King Senior share his son’s love of sports – even claiming to be an avid darts watcher – he likes his cars. His current garage includes a McLaren 12C, as well as his Jaguar XJ working wheels. Perhaps dad was trying to live vicariously through Jordan’s path to Formula One? “My parents never pushed anything,” says Jordan, who therefore has a different relationship with his dad than, say, Lewis Hamilton or Max Verstappen. “I asked both my mum and my dad recently why they hadn’t pushed me more, that it might have helped, but their argument was that had they been pushy I would never have wanted to do it for myself.” 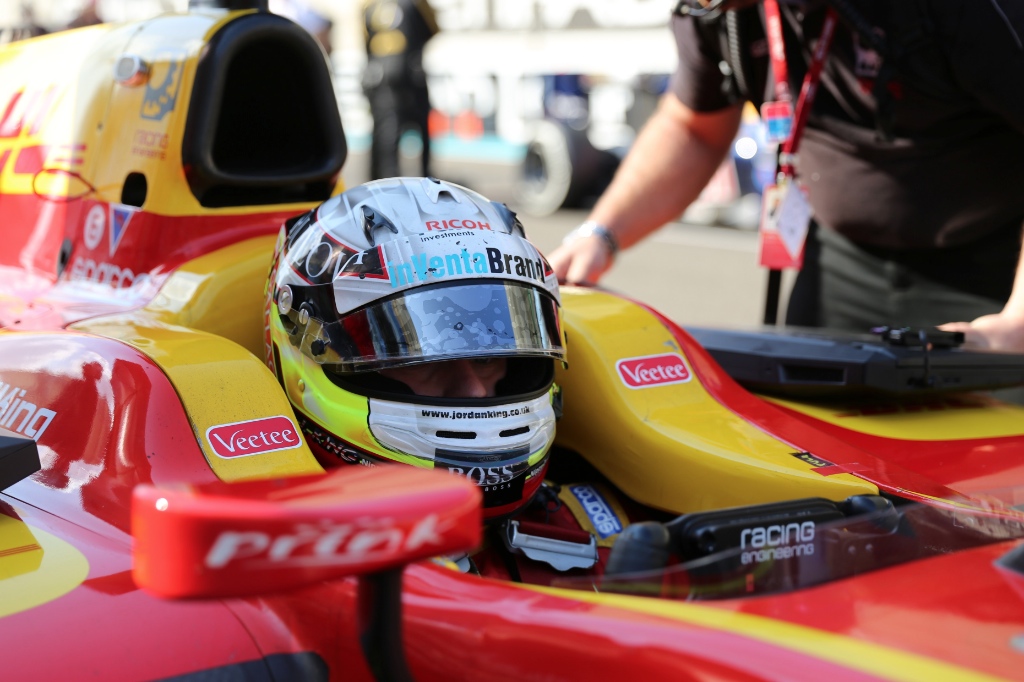 Jordan’s parents divorced shortly after he graduated from Repton. “Obviously I’d rather my parents were still together, but they live half an hour from each other and I can drive. Logistically it’s made it a bit more difficult because I don’t come back to one house, I go back to two, but that’s okay. I’m out of the country most of the time and it’s not impacted on my career. Mum loves the racing, she’s not scared, she leans over the barrier yelling at me to drive faster.”

Jordan has a sister, Briony, who’s two years older and followed a more traditional route; Repton, then Nottingham University and now accountancy. “My dad got a 2:1 and she got a First, just to beat him,” says Jordan. While Justin was taking the lad to race tracks, mum Claire was taking Briony around the country horse riding.

In the last couple of years, Justin’s own interest in motor racing has led him to join forces with OVO Energy founder Stephen Fitzpatrick, with Justin becoming chairman of Fitzpatrick’s Manor F1 team. A year ago F1 nut Fitzpatrick decided to buy the team after he sat in the grandstands at a grand prix and wondered how he could get on the other side of the fence. King, meanwhile, had left his £900,000-a-year job at Sainsbury’s and joined private equity firm Terra Firma. This followed rumours that he’d left Sainsbury’s to take over the running of Bernie Ecclestone’s Formula One Group. “Well, there was talk, but not from me,” he cautions. “It remains the case that there isn’t a vacancy. At Terra Firma I have something which really fits my skills, and I think we’ve done quite a special thing in salvaging Manor.”

There are two Kings at Manor, Justin the chairman “until we’ve put the business on a firm footing” and Jordan the test driver and wannabe F1 racer. If he climbs into a race seat in 2017, will it be on merit? “It would be naïve not to recognise the perception that he’s there because of me, but the reality is that the two things are independent. I want to be able to look in the mirror and say that,” says King senior. “For Jordan it’s equally important; he needs to know that he’s there because he deserves it.”

Justin likes to talk about the “tramlines of strategy”, and how it’s down to his son to stay within those lines as he continues his journey to the pinnacle of motor racing. “You set a destination, and you check along the journey that you’re still within the tramlines. If you set the goal to be champion and you’re finishing 23rd then you need to take stock. But so far he’s hitting the targets.

“My proudest moment in motorsport will be seeing Jordan start his first F1 grand prix. When you’re a parent your only role, really, is to help your kids achieve whatever their ambitions are.”