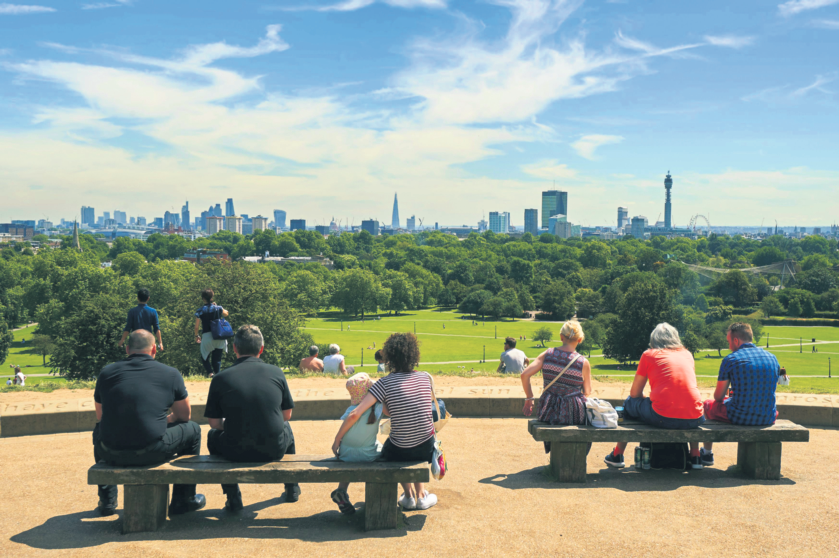 The term ‘London village’ is thrown around a lot these days, not least by those trying to sell you a property. By some standards, anywhere with an independent bakery and a few planters on the high street seems to qualify.

But Primrose Hill, nestled between Regent’s Park and Camden, is one of the originals – and locals take great pride in their tight-knit community.

“It is one of London’s most desirable neighbourhoods, whilst in the middle of it all, it retains a village feel with an active local residents group and regular community events,” says Alex Michael, St John’s Wood branch manager at Hamptons International.

The reasons it is one of London’s most sought-after postcodes are many. It has attractive period properties, top schools and, of course, the eponymous hill with fantastic views over central London. It’s also home to a well-publicised tribe of A-listers, which over the years has included Kate Moss, Jude Law and Sadie Frost.

It’s a great place to people watch, especially The Princess of Wales Pub and Cowshed

Emlyn Parks, associate sales director at Chestertons in Camden and Primrose Hill, says that not having its own underground station (although it is close to Chalk Farm and St John’s Wood) is actually a bonus for Primrose Hill, adding to that all-important village feel along with its “individual shops, cafés and boutiques.” It is so quintessentially upper-middle-class London that it was chosen as the location for the film Paddington starring Hugh Bonneville.

“It’s a great place to people watch, especially The Princess of Wales Pub and Cowshed where you’ll meet the colourful characters in the area,” Michael adds.

Parks says its housing stock is mainly made up of “beautiful detached Victorian homes, many of which have been separated into flats over the years.” Prices for flats start at around £600,000, while houses start at about £2m. They can go as high as £20m for a large, family home.

“Family houses don’t come to the market very often, so when they do competition is high,” Parks adds. This year, 49 per cent of homes were sold for £1m-plus according to Hamptons International, compared with a high of 53 per cent in 2017.

New builds are very rare thanks to strict planning regulations and protective locals, but residents wanting more space than the average Victorian terrace provides have found a way to get around this.

“We have seen a couple of examples of purchasers buying two houses next to each other and knocking them together, giving them the large lateral living space they are looking for,” says Jo Eccles, founder of buying agency SP Property.

Prices starting to ease off

According to Savills, the average price per sq ft is £1,300 – higher than the £1,200 average for prime London. But potential buyers will be pleased to hear that prices in Primrose Hill have fallen slightly more than the London average in the past couple of years.

While prices in prime London as a whole fell by 5.7 per cent in the two years to June, Primrose Hill has witnessed an even steeper drop of 8.7 per cent. Savills research analyst Frances Clacy says this is because lots of people move to Primrose Hill for lifestyle reasons, and can easily put off their purchase until the economic outlook is more certain.

“It’s traditionally a more discretionary rather than needs driven market which has resulted in more cautious market sentiment,” she says. But she adds that transactions will continue “where buyers have seen a home they like and cannot put their life plans on hold any longer, particularly local families upsizing and wanting to get settled.”

Market ups and downs will come and go, but it will take more than that to dull the appeal of this London village.

Primrose Hill is home to an abundance of well-loved local dining institutions. Family-run Greek establishment Lemonia is always a popular choice, while modern European stalwart Odette’s tends to attract the arts and theatre crowd who live in the area. Chef Michael Nadra chose Primrose Hill for the follow-up to his wildly successful Chiswick outpost, and the Primrose Hill venue also includes a martini bar and garden. For more relaxed dining, head to La Collina, an Italian which prides itself on its ‘homely atmosphere’. The best local watering hole according to residents is The Engineer, an established gastropub with a wide selection of craft beers. When you’ve had enough of eating and drinking, head to Cowshed – one of just a handful of London branches of the spa which was founded by Nick Jones of Soho House. With Regent’s Park so nearby there are plenty of options for a scenic walk, but if you tire of its magnificent vistas then Camden Lock is also just down the road.

Homes on the market in Primrose Hill

This three-bed, raised ground floor apartment sits within a grade-II listed building and has a private roof terrace.

A semi-detached, five-bed and five-bath family home which has been extensively remodelled, retaining the period façade.

This four-bed home with three reception rooms sits within Primrose Hill’s only garden square, which dates from 1850.