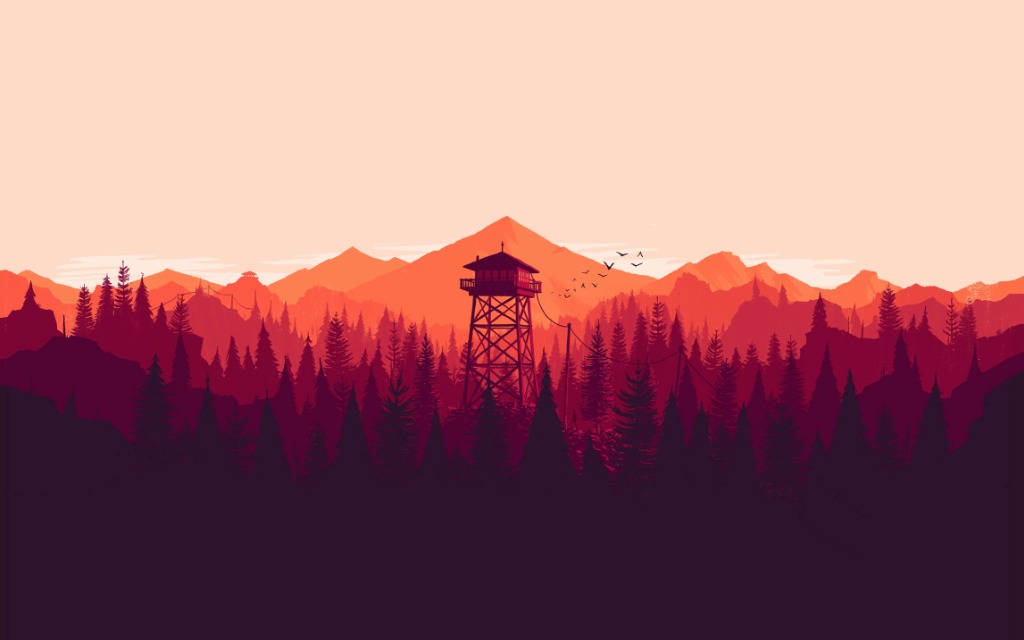 There’s a paradox at the heart of Firewatch. It’s about the epic, unfathomably massive, dangerously potent world of nature. And it’s also about the tiny, dark, often unbearably sad world inside our heads, a place even the most gloriously saturated of sunsets can’t always illuminate. These twin factors, two sides of the same coin, are ever-present in developer Campo Santo’s game, each one both reassuring and terrifying.

It’s through this rocky landscape – both existential and literal – that you guide Henry, a man in whom you feel immediately invested thanks to a wonderfully involving, text-based opening sequence that asks you to decide how he acted during key moments in his marriage. His initial chat-up line. What he called the dog he and his wife chose together. Whether he locked her in their bedroom when what appears to be a mental illness began to take its toll, so he could drink his sorrows away in the local bar. You really feel like you know a man when you’ve made those kind of decisions for him.

To get away from it all, Henry takes a job as a fire lookout at a national park in Wyoming. His only line of communication – it’s set in the late 80s – is a walkie-talkie connecting him to his new boss, Delilah, who occupies the next tower across. She sends him on the odd errand but is mostly happy to make light conversation as he wanders the park, guided only by his retro map and compass. And it’s a remarkable place. The art direction is stunning: stylised and vivid. Burnt orange sunlight filters through the trees, lens-flare glints as you look out over sweeping canyons, burbling streams emerge from the undergrowth, and wind howls as you leave the shelter of woodland. There’s a “jog” button that I frequently ignored, preferring instead to soak up the atmosphere at a more leisurely pace. It’s beautiful. 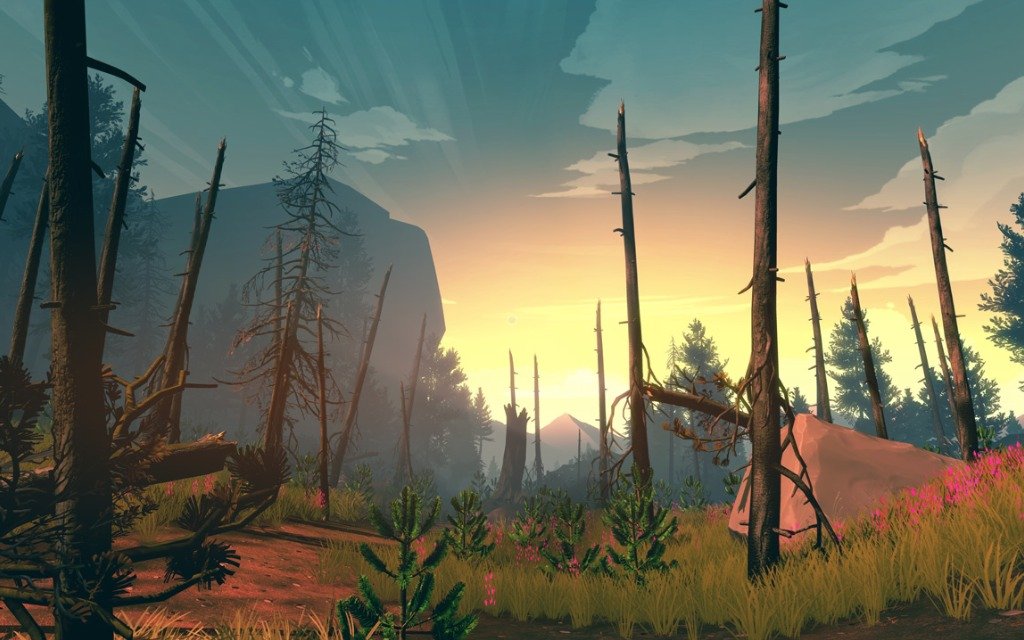 The environment is consistently spectacular

All the while you get closer to Delilah, learning how she thinks, what she enjoys. It’s a romance, of sorts. It works thanks to a brilliant dialogue system in which the trigger buttons – more readily associated with killing – become your tools for communication. Conversation trees are on a timer, meaning you can interrupt, answer back or ignore her altogether. It feels natural, and is helped along by exceptional voice acting.

Things inevitably take a turn for the strange – a campsite is destroyed, a mysterious man is seen prowling at night – but the tension is subtle and cleverly maintained. It could all be nothing, or it could be something horrific that you can’t quite make out. An uneasy paranoia takes hold that Delilah may somehow be involved in the unfurling mystery (hinted at by the fact she’s named after the Biblical character beloved of Samson, who betrayed him and led to his downfall). But you want to believe her, because she’s so well written, because she feels like an actual person. There’s a moment early on when you overhear her talking about you to an unknown third person; when I was given the chance to call her out for it, I let it slide.

Firewatch is similar in execution to other so-called "walking simulators", especially last year’s Everybody’s Gone To The Rapture: both are ostensibly open-world, hauntingly atmospheric and steeped in melancholy (although, for better or worse, EGTTR is decidedly less linear). The tension, though, comes from a different place – it doesn't derive from the uncanny absence of people in recognisably public places, but rather the sensation that people may be lurking where you don't expect them. It’s a big park, after all. 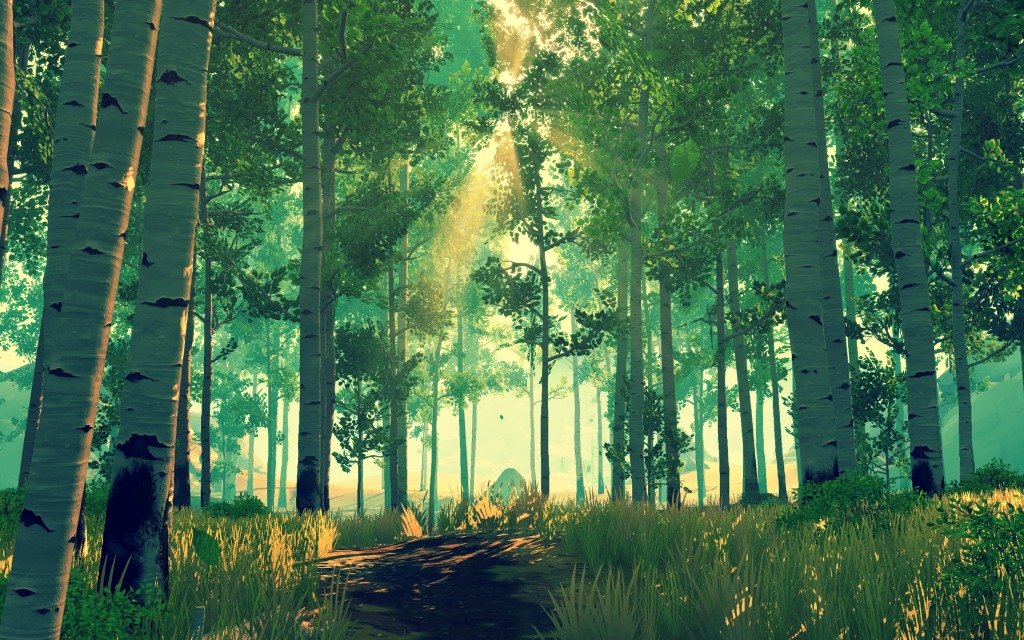 A great spot to take a picnic

Despite its apparent size, however, there’s virtually no encouragement to stray far from the linear paths mapped out for you, and disappointingly little opportunity even if you were to try. Most areas are deceptively enclosed, with only one or two exit points and little to interact with. Neither are there any puzzles to solve – at all – presumably for fear they would interrupt the narrative pacing. The developer's control over this world is total: the sun sets (spectacularly) when you reach certain points, days and weeks fly past with no player control. This can feel restrictive: a few problems to crack and a little freedom to work to your own schedule would be a welcome counterpoint to the main story.

It’s a relatively small quibble, though. You may be a spectator in this world, but it’s still a glorious place (even for the short time you’re there; an unhurried play-through will take around six hours, and there’s little replay value). But you should enter with your eyes open: this isn’t a puzzle game. Nor, despite appearances, is it a mystery. Firewatch isn’t really about whatever's happening in the national park. It’s about a beautiful horizon and the inside of one man’s head.

• This game was reviewed on PS4, on which we experienced some moderate frame drops, especially when autosaving; PC users report a smoother experience