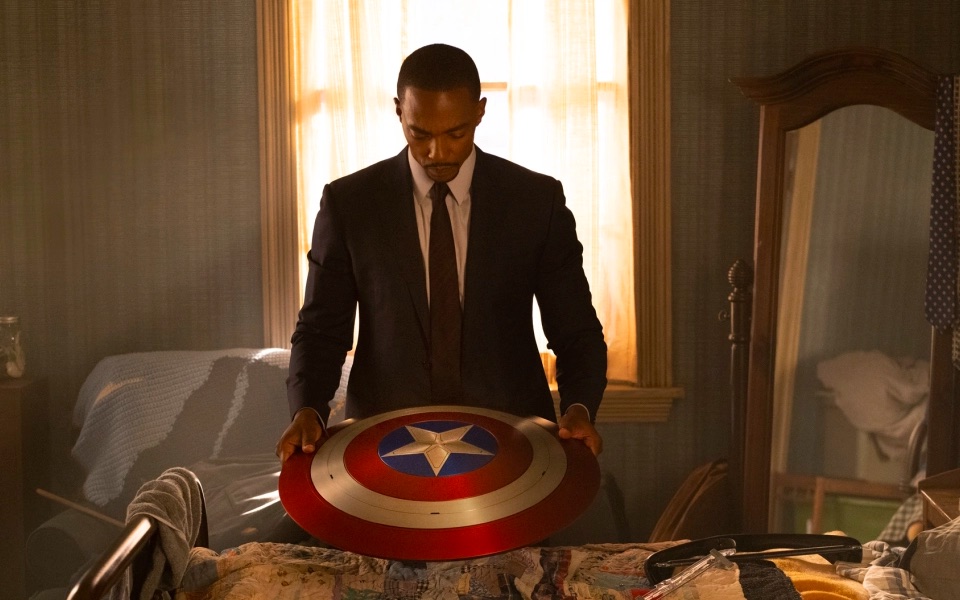 *** WARNING! This contains spoilers for all episodes of Falcon and Winter Soldier ***

So, we come to the big finale, where everything will be resolved and all loose ends tied up. Just kidding, this is Marvel after all, but amid the teasers for forthcoming attractions we can hope for some kind of resolution.

We arrive where we left off last week, with the Global Repatriation Council being attacked by Karli Morgenthau (Erin Kellyman) and the Flag-Smashers. Bucky (Sebastian Stan) meets with Sharon Carton (Emily VanCamp) who has been called in by Sam (Anthony Mackie) as they prepare to foil the plot.

We get a rather big and satisfying introduction to Sam, or rather, Captain America, in a cool new suit and of course the shield. After years of being a supporting star, it’s gratifying to see Mackie get his moment after being the emotional core of this miniseries. There’s only a moment or so to grandstand, however, as he’s attacked by Batroc (Georges St-Pierre). They enter a prolonged while Karli distracts Bucky on the phone, in order to take members of the GRC hostage by tricking them into boarding a helicopter.

With Karli making it clear to Sam that she will kill everyone to get her point across, we come to the coolest sequence of the entire episode – Sam soaring through the night sky to try and rescue the helicopter, liaising with a hostage on board who is able to take control of the vehicle when he removes the Flag-Smasher pilot. It’s big, it’s brash, it’s everything you want from an action series.

On the ground, John Walker (Wyatt Russell) tries to save another group of hostages, while also trying to sate his Super Soldier revenge lust. Karli tells John that his partner Lemar Hoskins’ (Clé Bennett) life doesn’t matter (they could have phrased that better), then puts the hostages in a perilous position as the Flag-Smashers escape. With a choice between saving innocents and getting vengeance, John does the right thing. It’s quite a rapid character change from the seething betrayed outlaw we saw last episode, but he’s not the only one showing their true colours.

As the Flag-Smashers make a run for it, Sharon catches up and holds Karli at gun point. While we think she’s on the side of justice, she is revealed to be The Power Broker. Oh Sharon, what would Auntie Peggy think?? Bartroc arrives, clearly in Sharon’s employ, but wants more money to kill Karli. Sharon kills him, but in the melee is shot by Karli as Sam arrives. Sam wants to help rather than fight, only blocking Karli’s blows, but just as it seems she is about to kill him, she’s shot dead by a wounded Sharon.

Well, that was a twist. There was obviously a big hint last episode that Sharon wasn’t all she seemed, but to put her in such a huge baddie position is going to be very interesting, given that the only person who could identify her is now dead. It’s a touching ending for Merryman, who was always much more than a cackling baddie, and gave this series extra dimension. As with Wanda, she seemed to be a good person who turned to harmful means.

Landing near a police blockade with TV and crowds watching, Sam delivers Karli’s body and debates with the GRC about their methods, asking if they thought about the people who are affected by the decisions they make, and why Karli went to the lengths she did. It’s heavy with political subtext, and light on subtlety, but Mackie is superb. It’s Captain America, or rather, he is Captain America. Whether Steve Rogers is dead, or very old and not getting any texts back, somewhere he’s smiling.

We enter a Lord of The Rings style series of codas, where we see where everyone ends up. The remaining Flag-Smashers are (somewhat conveniently) blown up by Zemo’s (Daniel Bruhl) butler, while the man himself is seen listening to the news in his cell in The Raft, and smiling. John Walker meets with Val (Julia Louis-Dreyfuss), who gives him a new costume (the same, but black) and a new name (US Agent). He appears to be back, but it’s vague as to what end.

Sam then meets with Isaiah Bradley (Carl Lumbly), who saw his heroics and is impressed, if not convinced. Sam agrees that it won’t be easy, but that it is worth fighting for. We all then get a lump in our throat as he takes Isaiah and his grandson Eli (Kamil McFadden) to a new wing at the Captain America exhibition, dedicated to what he did. We said before that the real-world issues discussed in this series won’t be resolved with a battle or a speech, but this is an eloquent way of rounding off the struggle Sam had with picking up the mantle, and some pretty strong storytelling from a franchise that hasn’t always been this sensitive.

Bucky catches up with his friend Yori (Ken Takemoto) and tells him that he was the one that killed his son. With the names in his list scratched off, Bucky appears to be able to move on. It has been more about Falcon than Winter Soldier through the series, but Sam had the more compelling arc. Nevertheless, Sebastian Stan has worked well with some pretty dark moments.

We have one final party montage and then one final title screen before the credits: Captain America and Winter Soldier. It’s all over, right? Well, there’s one more thing. A mid-credits scene shows Sharon pardoned and welcomed back into government service. She flashes an evil smile upon leaving the committee chambers and calls someone, indicating she is going to use her access to government secrets for her own gain.

Falcon and Winter Soldier gave itself a lot to do in six episodes. Starting like just another Marvel action film, it delved into heated subjects that Hollywood normally steers clear of, and as with WandaVision gave some talented co-stars a platform to show how good they really are. There have been shaky moments, and some plot points were hammered home when a more considered approach might have helped.  However, it’s a nice re-introduction to the Marvel Cinematic Universe as we know it, and presumably a good primer for next months’ Black Widow. We’d love to see a Captain America film with Mackie in the lead, but for now it appears the post-Endgame changeover in the Avengers Universe is moving ahead steadily.

All episodes of Falcon and Winter Soldier are available on Disney+ now.