THE EUROZONE’S manufacturing sector saw a boost for the fourth month in a row during October, its best period of growth since the European Central Bank’s brief rate hike in 2011.

The euro area’s factories recorded a score of 51.3 in Markit’s purchasing managers’ index (PMI), a slight improvement on September, and above the neutral 50 mark.

Of the currency union’s major economies, Germany, Spain and Italy all posted figures which indicated growth, while France’s factories recorded a PMI reading of 49.1, indicating a small contraction. 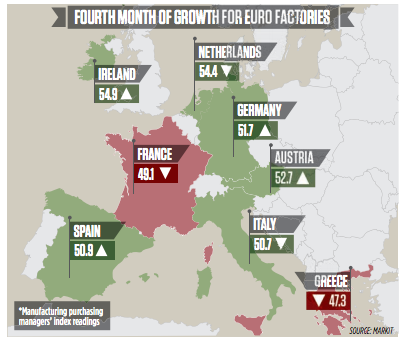 Though Greece was the only country that indicated a decline in new export orders during the month, manufacturing employment still appears to be on a declining path across the region, falling for the 21st month in a row.

“While the recovery goes on, it is by all measures frustratingly slow. In particular, the modest gains in output and new orders remain insufficient to encourage firms to take on more staff,” said Markit’s chief economist Chris Williamson.

The reading for Ireland’s factories, 54.9, was particularly welcome as the strongest the country has seen for two and a half years.

Holger Schmieding of Berenberg Bank commented: “The sector looks set to gain a little extra momentum soon. But the Eurozone lags behind the recoveries in the US and the UK where a much more aggressive monetary policy is feeding through into stronger demand growth.”

IHS Global Insight’s Howard Archer concurred: “This reinforces suspicion that while the Eurozone is likely to keep on growing after finally exiting extended recession in the second quarter, the region still faces a hard slog in developing decent recovery and remains vulnerable to setbacks.”

Sentix research group’s index of investor confidence for October was also announced yesterday, posting the strongest result in two and a half years. The currency union emerged from a long recession in the second quarter of the year, but many analysts believe that ongoing challenges will limit growth for the time being.