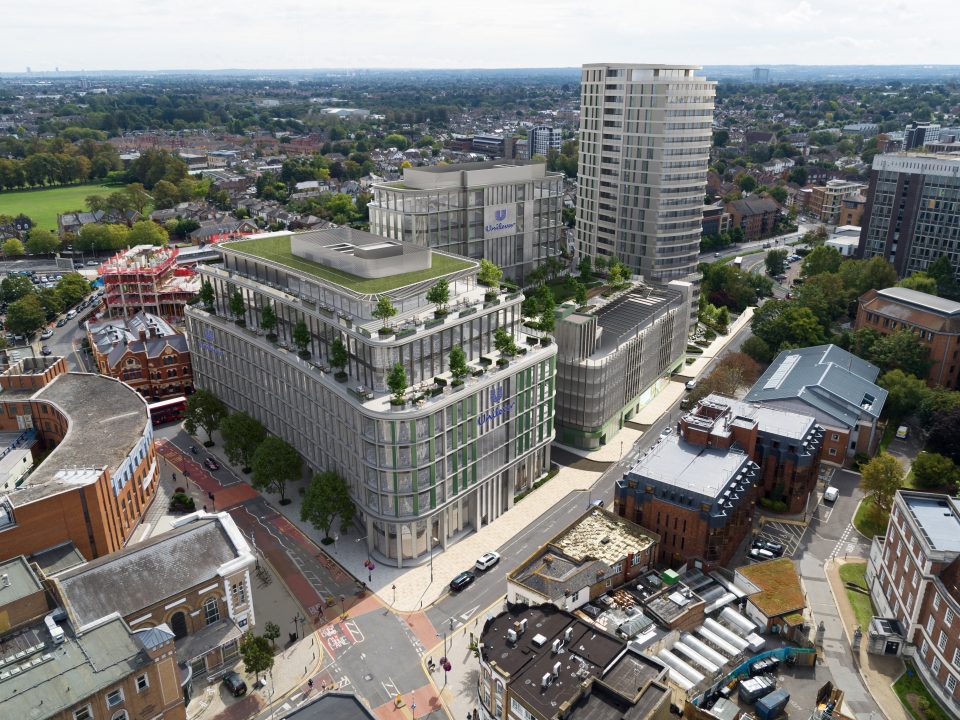 Plans have been unveiled for a new Unilever headquarters in Kingston-upon-Thames, which will consolidate the conglomerate’s offices across London and Surrey.

The developer, Cube Real Estate, has submitted a planning application for a mixed-use redevelopment, including two office buildings, a car park for electric vehicles and new homes.

If the scheme is given the green light the consumer goods giant, which owns Persil, Dove and Marmite, will move in at the end of 2023 or beginning of 2024.

The move will consolidate 2,000 members of staff from five existing sites in London and Surrey, including many from its Victoria Embankment headquarters.

Unilever will keep some space at its central London HQ for meeting rooms and for its “prestige” premium beauty brands.

Sebastian Munden, executive vice president of Unilever UK and Ireland, said, “Following consultation with our employees, we are excited to work with Cube on a Unilever Campus in Kingston.

“For Unilever, this represents a rare opportunity to bring together teams in a highly sustainable, accessible and inspiring office designed for future ways of working, which will be a hive of collaboration for our employees, and for retailers, suppliers, consumers and other organisations.”

In June the firm announced plans to end its joint Anglo-Dutch structure to unify under its UK listing, after failing to persuade British investors to approve a shift to its Rotterdam HQ in 2018.

Read more: Unilever to remove all fossil fuels from cleaning products by 2030

The consumer goods giant will swap Dutch shares for its London-listed Unilever PLC stock, with Unilever PLC becoming the single parent company it will unify under.

It comes after the consumer goods behemoth failed to abolish its London headquarters and move its primary listing to the Netherlands amid huge investor opposition.