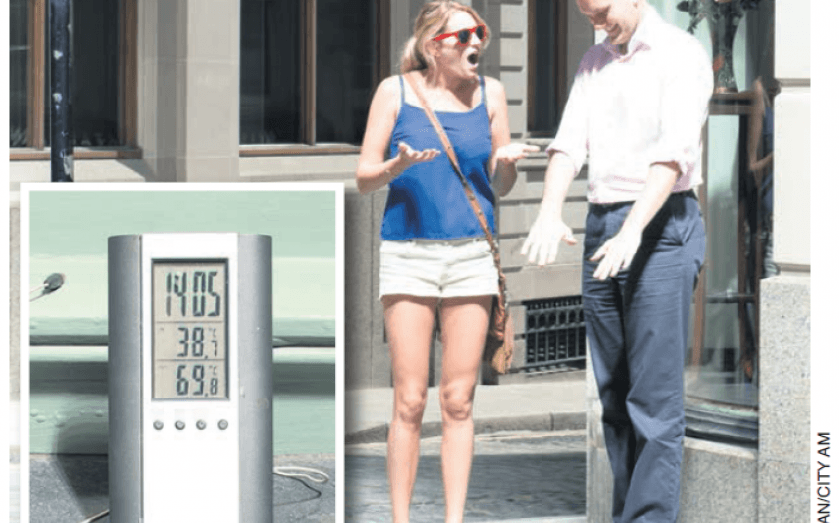 EXPERTS yesterday said the hot ray of light reflected  by the Walkie Talkie is on an “unprecedented” scale – as City A.M. found the heat on Eastcheap in mid-afternoon is hitting 70°C.

“I’m flabbergasted,” said Dr Philip Oldfield, an expert in tall buildings at the University of Nottingham’s Department of Architecture, who warned other parts of London could be hit by the light beam.

“At street level it’s unprecedented. The scary thing is that the light won’t always be on that part of the street. The sun angle will change through the next weeks and months – and in the winter the localised hotspot will have moved substantially.”

Yesterday City A.M. revealed how the curved shape of the building at 20 Fenchurch Street – now dubbed the Walkie Scorchie – is focussing an ultra-bright ray of light that has even melted parts of parked cars.

And when we visited with a thermometer at 2pm yesterday the temperature of shop fronts in the ray of light was an astonishing 69.8°C.

Oldfield said while glare is a relatively common issue with tall buildings, it is rarely focussed on the street: “There are examples in the past where an architect has had to rebuilt the facade. If this is serious then I dread to think how expensive it will be.”

“But if you’re going to build a very large glass screen facing south – well, what do you expect?”

Dr James Keaveney of the University of Durham’s Atomic and Molecular Physics department said it appeared to be an inherent flaw in the building: “It’s a concave shape so it’s going to have a focussing effect on the light that is reflected from it.”

“There’s a power station in Spain that works on this principle. They have an array of mirrors that focusses light into a central pillar – if it’s 60°C you could get solar panels and get some energy out of it.”

Last night Land Securities and Canary Wharf, the building’s developers, said the beam could remain for most of September: “[We are] evaluating longer-term solutions to ensure the issue cannot recur in future.”

In a statement on his firm’s website, the esteemed architect Rafael Viñoly set out his thoughts on the 20 Fenchurch Street skyscraper, explaining that he designed the building “to respect the city’s historic character…while further contributing to the evolution of the high-rise building type”.

The top-heavy design of the Walkie Talkie raised eyebrows when it was first proposed in 2007, and Viñoly modified the plan to lose nine floors.

The recent controversy in London is not the first time a building designed by Viñoly’s practice has created unusual lighting effects. In 2010, it was reported that his practice’s Vdara Hotel in Las Vegas was bouncing fierce rays onto tourists at its swimming pool below.

Born in Uruguay in 1944, Viñoly grew up in Argentina where he graduated with a Diploma and Master in Architecture before setting up his practice.

In 1978, he moved to the US, serving as a guest lecturer at Harvard Graduate School of Design before  founding Rafael Viñoly Architects PC in 1983.

His firm is behind the masterplan for  Battersea Power Station.