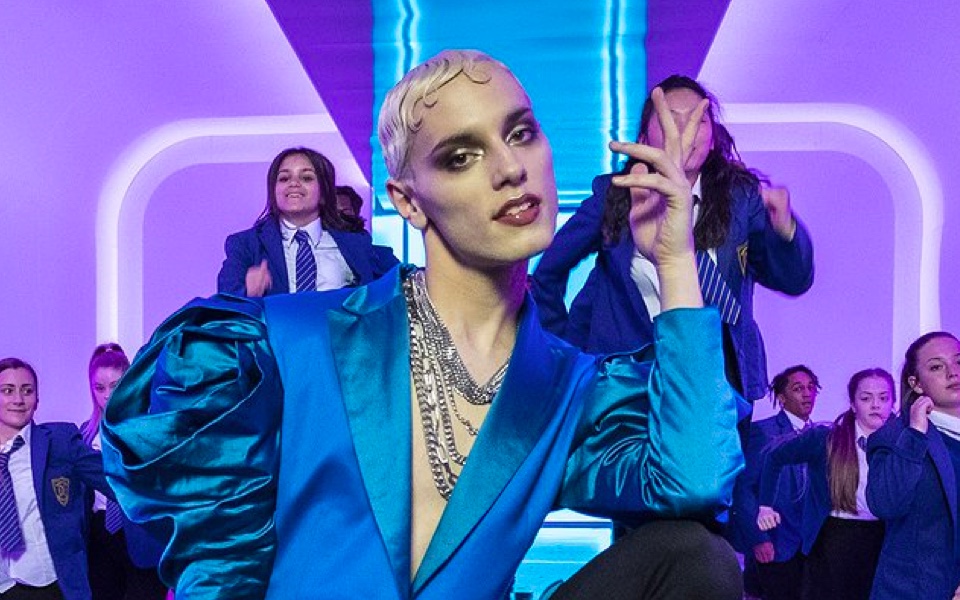 Everybody may be talking about Jamie, but it’s unlikely to be in a cinema foyer. Original studio Disney were intending a theatrical release until as late as May, when the film was sold to Amazon for its streaming service and a limited cinema run in the UK. The adaptation of the West End hit was tipped to bring some feelgood to the box office, but can Everybody’s Talking About Jamie still do the same to your streaming queue?

The musical, which has its roots in a BBC 3 documentary, follows Jamie (Max Harwood), a 16-year-old teen who is fully aware is different from his classmates. As he prepares to leave school to pursue a career as a drag queen, a birthday gift from his mother (Sarah Lancashire) inspires him to attend the prom in drag. Coached a by local boutique owner Hugo (Richard E Grant) and cheered on by his best friend Pritti (Lauren Patel), Jamie faces some opposition in the form of school bullies, a concerned teacher (Sarah Horgan), and his own father (Ralph Ineson). As the day approaches, Jamie learns through history and song to embrace his true self.

Directed by debutant filmmaker Jonathan Butterell, who developed the stage version, there are many things to enjoy about this roar of sparkly independence. Harwood is impossible not to love as Jamie, a camp-as-Christmas lead who doesn’t feel like a stereotype. His friendship with Grant acknowledges that no-one is the finished article at that age (when Jamie says he doesn’t know who he is, Hugo snaps back “you’re 16, of course you don’t!”), and fits in a delicate, beautiful portrayal of Queer history in the number This Was Me.

If you’re looking for something in the vein of TV’s It’s A Sin or Pose, prepare for disappointment. It’s a bright, glittery fairytale that powers through the sadness with a song and some lip gloss. This can mean some of the deeper aspects get pushed to the side or solved with a simple rousing speech. Ineson’s gruff dad, Horgan’s dismissive teacher, and the bullies are not fully realised characters, mainly there for the untiring hero to prove wrong. While it would be nice to believe there’s a mentor on every street corner for our nation’s Queer youth, for many people this leans toward fantasy.

That doesn’t make it a bad film – most rom-coms bear little resemblance to real life romance – and if you’re looking for a family friendly way to embrace these issues this is a good choice. The musical numbers jump from the screen, and national treasure Sarah Lancashire nails Jamie’s unflinchingly supportive mother.

As a work of cinema, Everybody’s Talking About Jamie is a spirited musical that aims to make you smile, even if that means working a bit too hard for the fairytale ending. However, like Love Simon a few years back, a lack of complexity may make it a more accessible tale for those beginning to understand who they are, or for families who wish to better understand the ones they love.

Everybody’s Talking About Jamie is in select cinemas and on Amazon Prime Video from 17th September.