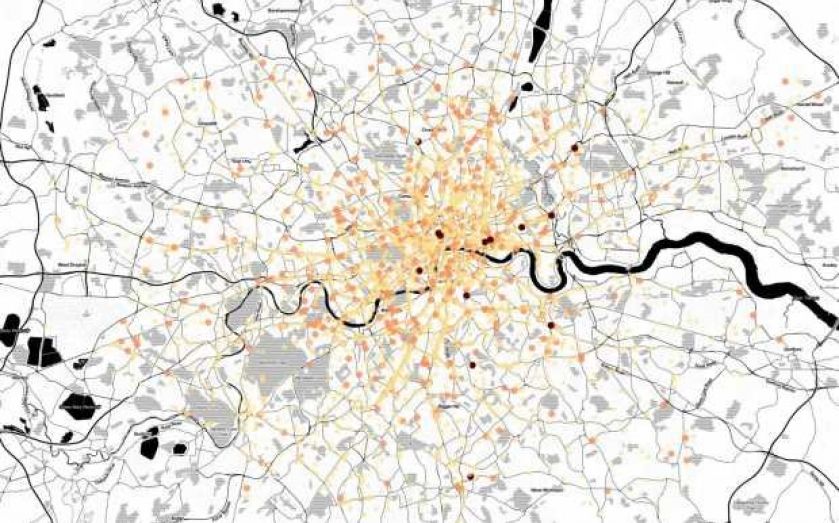 To scroll past this visualisation on mobile, swipe down on the right-hand side of the map.

The Elephant & Castle roundabout is infamous among the capital's cyclists. In 2013, the last year for which we have complete data, there were 15 incidents involving cyclists on or next to the junction.

In May last year, 47-year-old Abdelkhalak Lahyani was knocked from his bike at the junction as he cycled from his home in Newington Butts to work at the Oxo Tower restaurant on the South Bank. Hit by an HGV, he was pronounced dead at the scene.

Shortly after his death Lahyani's widow, Fatima Manah, implored planners to make the roundabout safer. "It is like a death trap," she told the Evening Standard. "[It is] just so dangerous for cyclists, and needs to be changed to prevent further deaths."

At the time, Leon Daniels, Transport for London's (TfL) managing director of surface transport, said TfL was consulting regarding plans to redevelop the roundabout. "We know HGVs are a disproportionate cause of death and serious injury and are taking a number of steps to tackle this,” he said.

Late last year, TfL announced Elephant & Castle roundabout is one of 33 junctions and gyratories, mapped above, it's aiming to redevelop in an effort to make London more cycle-friendly over the coming years. The cost of the project will come in at a cool £300m. For many, the redevelopments can't come soon enough: in 2013, 4,623 cyclists were hit by vehicles.

But can London ever be a truly cycle-friendly city? According to Andy Cawdell, a co-founder of the London Cycling Campaign (LCC), when engineers from Holland, a country famous for its spacious, sweeping, cycle-friendly highways, came to take a look at the infrastructure, they shook their heads. London’s roads are busy and non-malleable, they said.

How many people are getting injured?

Malleable or not, though, one thing's for sure: the number of cyclists in London is growing. Attracted by the successes of Team Sky and Team GB, in recent years Londoners have taken to cycling in record numbers.

Despite that increase, the number of serious accidents has fluctuated; first falling and now seemingly rising again. Some 475 cyclists were seriously injured on London's streets during 2013, including 14 fatalities. As the map above shows, the dotted casualties trace the junctions and roundabouts, showing exactly where the capital's roads are at their most dangerous.

Cyclists killed or seriously injured (KSI) and the total number of collisions both as a rolling five-year average (lines) and single-year totals (dots).

The good news is, even as the number of journeys seems to rise, because the number of car journeys has fallen, injuries are not increasing at the same rate.

Three-year rolling average of people killed or seriously injured, against the number of car and bike journeys taken each day.

But although the ratio of bike journeys to accidents has dropped, as has the number of car journeys, more people on the streets means more accidents, even if the risk to the individual may have fallen. And as Boris Johnson et al do all they can to increase the number of cyclists on the roads, the problem could rise.

It's also worth noting that the stats don't tell the whole truth: in 2013, on average, there were 12.7 accidents involving cyclists every day, against 580,000 journeys.

That means statistically, one cyclist would have to cycle to work and back every day of the year, including Christmas, weekends and bank holidays for 62 years before he or she had an accident. For many cyclists this doesn't hold true: the majority of victims who come away with nothing more than a graze and a shaken ego are unlikely to call the police, which means the number of reported accidents are likely to be the tip of the iceberg when it comes to slight injuries.

No time is more dangerous for cyclists than rush hour. Tempers fray and people are desperate to get home. According to TfL, cyclists account for a quarter of the traffic during the rush hour, including 36 per cent of traffic at the Elephant & Castle north roundabout, that notorious black spot.

But while volume of traffic is a huge contributing factor, it's not the only one. Severity of injury often varies substantially depending on the other vehicle involved in the accident.

If cyclists make up a quarter of the morning rush, freight makes up 28 per cent. These vehicles are of particular danger to cyclists, because drivers have impaired visibility – and because of the sheer weight of the trucks.

Of the largest vehicles listed in TFL’s data, the 7.5 tonne plus category, there were only 47 accidents in 2013, yet over 20 per cent of those resulted in death or serious injury. Just over a quarter of all fatalities came from this class of vehicle. The high proportion of serious injuries in the "other" vehicle type can be explained by some of the vehicles in that category. According to the Metropolitan police, examples include:

Collisions by vehicle type. Use the buttons to add and remove vehicle categories. The larger the dot, the more serious the injury. To scroll past this visualisation on mobile, swipe down on the right-hand side of the map.

TfL says it is moving towards a solution for the freight problem, including encouraging companies to re-time deliveries to reduce congestion and improve efficiency, as well as helping with cycling safety. Freight operators and TfL will soon trial elements of the scheme, including changing loading only restrictions from 10:00–16:00 to 19:00–23:00. Trials are expected to be completed by early 2015, with results published on this page of the TFL website.

But LCC's Cawdell thinks one of London’s major problems is its antiquated transport system and the grinding gyratories that lead cyclists to clash with traffic.

The map above supports Cawdell's conclusions: the Elephant and Castle north roundabout has a larger-than-average spattering of dots. In 2011-2013, there were 51 collisions reported there: 44 slight and seven serious.

As part of TfL's cycle-friendly changes, it is planning to redevelop the roundabout at a cost of £20m. The scheme, it says, was popular with residents, garnering 80 per cent support. 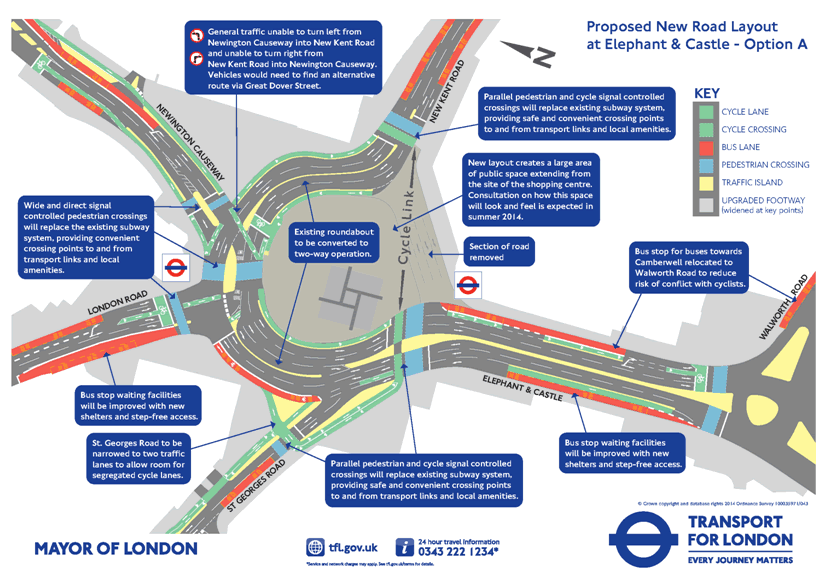 However, Cawdell doesn’t believe this goes far enough. He says the roundabout is particularly vulnerable to what cyclists know as the "left hook", when a vehicle turning left collides with a cyclist continuing straight. The road at the roundabout itself is wider than its tributaries, meaning cars accelerate when entering the roundabout, and traffic is forced together when leaving it.

The solution, Cawdell believes, is to be more radical. The roundabout, and others like it, need a system where traffic is filtered by direction. This would eliminate left hooks and make cyclists and traffic far more predicable. In addition, traffic should be segregated, with cyclists kept as far from motor vehicles as possible. Thirdly, he says, cyclists would be safer kept next to the kerb as often as possible; not meandering with intent through streams of cars.

The LCC has other ideas, too. TfL has organised cycle routes that avoid the roundabout, but they are slow and inconvenient, attracting what the LCC says is a mere 10 per cent of cyclists. At Elephant & Castle it proposes a redirection, improving the efficiency of the route to increase the number of cyclists using it.

But even with those solutions, the problem is a complex one: how do you reinvent a city whose winding, narrow streets have been built and rebuilt without cyclists in mind?

On the one hand, the data shows something is working. You are now less likely to become a recorded statistic than you were in the past.

But as the government encourages more people to take to their bikes, unless new solutions are found – such as proposals announced this week for a new "Crossrail for Bikes" along the Embankment – the total number of casualties is likely to remain stubbornly high. Fourteen dead cyclists is too many, especially with so many serious incidents centred around the same danger points.