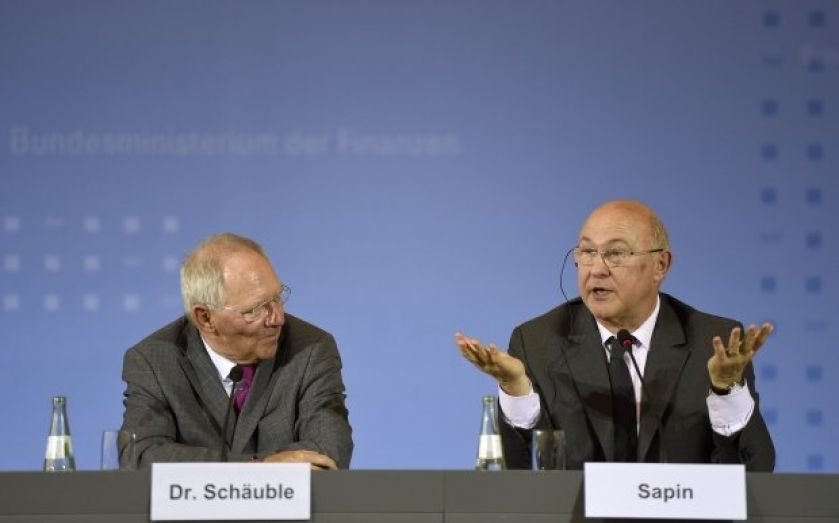 Sapin is not as outwardly radical as incoming economy minister Arnaud Montebourg, but is nonetheless tasked with pushing for less stringent deficit rules – it’s a large part of the reason that Hollande appointed him with new Prime Minister Manuel Valls.

Schaeuble, in contrast, is the Eurozone’s resident fiscal hawk, missing few opportunities to prod other European countries towards deficit reduction. He took the chance to quietly needle the French minister, saying that France has “confirmed that it knows its responsibility” on public finances. The comments echo economic commissioner Olli Rehn’s this weekend – Rehn said that there would be no justification for a more flexible deficit target without a negative shock to the country’s economy.

Sapin didn’t use the occasion to push the French position on deficit reduction, telling domestic Sunday newspaper Le Journal du Dimanche that the question would be settled in Brussels, rather than Berlin. But neither did he give former finance minister Pierre Moscovici’s reassurance that France did not want to renegotiate its target.

The European Commission already says France’s deficit is “expected to remain significantly above the three per cent reference value” by 2015, contrary to plans made in 2009 that the deficit would have dropped to 2.8 per cent by next year. This now seems entirely unlikely, and the country may not make its 3.6 per cent target this year either.

It’s not the only country that may well be pushing for more flexibility from the fiscal compact: new Italian Prime Minister Matteo Renzi called the three per cent target an anachronism when he swept into power last month.

According to BNP Paribas, we’re likely to get some detail in the expected delay on French deficit reduction from Valls later this week – but with growth sluggish at best in France, few are expecting a dramatic drop any time soon, and the coming struggle between Sapin and Schaeuble isn’t going anywhere.