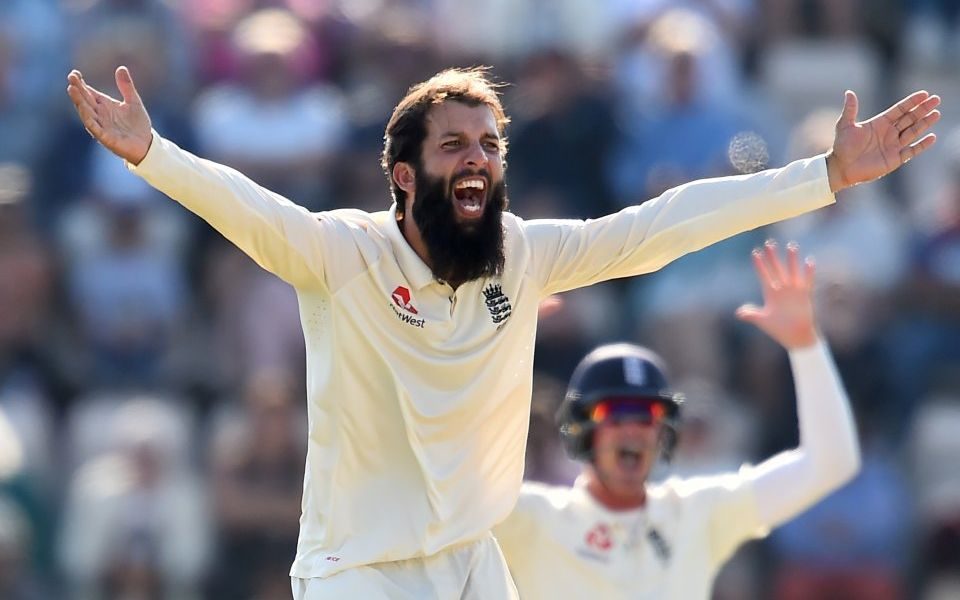 At the start of the summer Moeen Ali was out of the England Test side and relieved to be so.

After a run of four years and 50 caps without being dropped, the all-rounder was jettisoned, told to take a break and regain his confidence at Worcestershire.

He did so in some style, with an innings of 219 and eight wickets against Yorkshire prompting an international return at the Ageas Bowl against India.

The match could hardly have been better poised with England 2-1 up but on the back foot and dealing with a top-order batting crisis following a chastening defeat at Trent Bridge.

A player of the match performance and nine wickets to secure the five-match series against the No1 side in the world was some return for the quietly-spoken 31-year-old.

Moeen’s match figures of 9-134 are the best by any England spinner at home to India, while his four wickets, including the crucial two of Virat Kohli and Ajinkya Rahane, to wrap up the victory mean he now has 39 wickets in the last innings of Test wins, behind only stalwarts James Anderson and Stuart Broad.

Captain Joe Root hailed Moeen’s bowling performance as his best in an England shirt. It’s hard to argue. His control, accuracy and patience allowed him to exploit the wearing pitch to perfection. His status as the side’s match-winner looked well founded.

And yet Moeen sees himself as a batsman first, bowler second. He is happy to bowl, but less so to shoulder the burden that the tag of No1 spinner brings.

“This role is my best, batting [No7] and as a second spinner,” he said after taking 5-63 in the first-innings on Friday. “It gives me confidence and freedom, and I end up playing better.”

That differentiation, however nominal, clearly did good. With his friend Adil Rashid in the side, the pressure was off for Moeen. “He’s been able to relax and understand what his game is about in a less pressurised environment then come back and enjoy Test cricket again,” was the way Root put it.

Following his series-securing heroics, Moeen’s Test bowling average at home is 31.49 – not far behind England’s most prolific off-spinner Graeme Swann’s 28.94.

With a hard-fought victory to celebrate and a top order to ruminate over England are unlikely to give too much thought to their match-winner, but his performance gives the management another issue to ponder.

England are suffering an embarrassment of all-rounder riches. With Sam Curran and Ben Stokes both playing their part in the win, the long-term make-up and balance of the side is up in the air.

Moeen Ali said he would be open to batting at No3 in future (Source: Getty)

After a confidence-boosting first innings with the ball in Southampton Moeen answered Root’s call and went out to bat at No3 in the second innings. He scored nine runs before edging Ishant Sharma into the safe hands of KL Rahul, yet he confirmed today he is keen to give it another go.

The problem is one England have toyed with for his entire international Test career. Although No7 and No8 have been his most familiar position, Moeen has experience of batting in every role from opening down to No9.

The top order is malfunctioning and Root has always been happier at No3, so could the fifth Test at The Oval see Moeen continue at first drop? Despite his willingness to help the side now, it is an issue the all-rounder has himself highlighted before.

“I have been up and down the batting order and it’s difficult,” Moeen told the Guardian in April when at a lower ebb. “People don’t always realise that.”

Moeen has proved himself the man for many occasions with bat and ball, but his efforts have also posed a familiar difficult question: how do you solve a problem like Moeen?