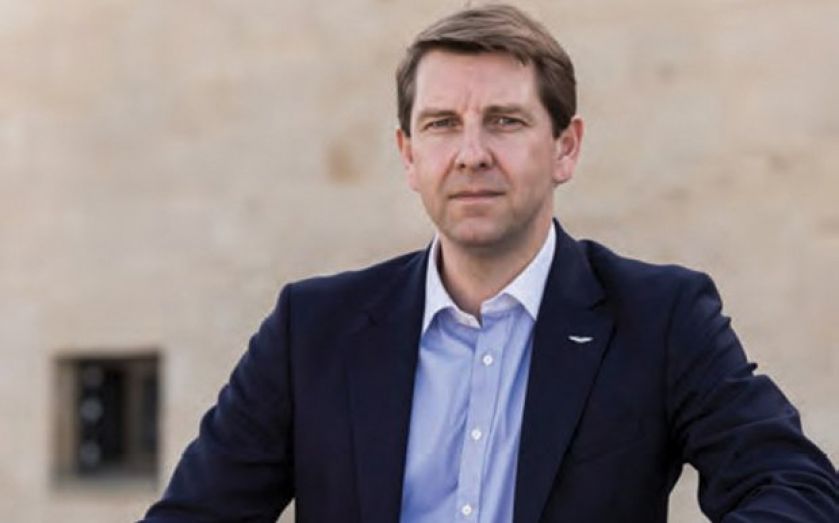 Aston Martin’s Simon Sproule talks balancing growth and exclusivity THE UK has long distinguished itself as a leader in luxury goods. Increasing wealth in the Gulf states and the Far East has opened up opportunities in new markets for high-end brands with a heritage. But when exclusivity is so important to a brand’s appeal, pursuing a strategy for growth can be challenging. A car afficionado from a young age, Simon Sproule has held communications roles at Jaguar Land Rover, Tesla Motors and spent 11 years at Nissan. Currently director of marketing and communications at Aston Martin Lagonda, he tells City A.M. how best to market a precious commodity. What attracted you to Aston Martin? When I was younger, I was drawn to cars which were slightly attainable. I was less interested in Ferraris, more in cars like the Rover SD1 or the Sierra Cosworth. The nice thing about Aston Martin is that the cars are expensive, investment purchases – but the brand still has accessibility. The company’s ties to James Bond have really helped us reach a wider audience. Like many people, I had a model of the DB5 with the ejector seat from Goldfinger. The company is still small in industry terms. I used to work for Nissan – which builds about 96,000 cars a week – more than Aston Martin has built in its entire history. The company was owned by Ford for a time, but it has largely remained independent, which I think helps to inspire respect and affection. How can a luxury brand balance growth with a need for exclusivity? Price point is one way. The Vantage is our entry model at £80-90,000. Controlling volume growth is another. We’re looking at manufacturing an electric vehicle, a crossover and a sedan – the Lagonda – so our ambitions for growth are big. But they are also careful and measured. Currently, we limit the number of sports car units we produce to 7,000 a year, which ensures a high residual value in the second-hand market. There has been an increase, but it’s still a small figure compared with Jaguar Land Rover for example. Personalisation is becoming key to profitability for small manufacturers in the bespoke market. We’re living in an age of “one-click-to-buy”. In the mass-market, which relies on economies of scale, purchases are made quickly and with minimal thought. A high number of people won’t even test-drive their car before purchase. The luxury market is moving in the other direction. What does personalisation entail? Our customers will want to try out a number of different Aston models, consider which trim they want, what kind of leather to have on the centre-console. The number of build combinations is almost infinite. And as the owner puts their own identity into it, the car becomes much more than a mode of transport. We have a high level of customer interaction at Aston Martin. We maintain strong connections with collectors’ associations. Potential customers can visit the factory in Warwickshire. We run a restoration business, which offers provenance certification for old vehicles. The value of an Aston Martin has risen dramatically as an asset class because their owners cherish them. It is difficult to find a DB5 for less than £500,000 today. Has your target customer changed? Our customers share a love of quality engineering and hand-crafted materials which transcends gender or nationality. As far as demographics go, they are getting younger. In the West, our typical customer is mid to late forties, but in China, they are ten years younger. Our customers tend to be male but there is no reason this should be the case. We also want to encourage female buyers into the brand. A beautiful car which is expertly made has a genderless appeal. Are there any negative aspects to your association with James Bond? We try to run our brand as an inclusive one and we enjoy huge popularity across the general market. The link with Bond is massively positive. It’s a defining element of the brand in the UK and overseas. If you look at the history of product integration, no relationship is as enduring as this one. Goldfinger came out in 1965 and the two of us have grown up together. When the DB10 was unveiled at the Spectre launch, we saw our web traffic spike. Things are perhaps more subtle in terms of the purchase process. After all, buying an Aston Martin is a big decision. Simon Sproule will be discussing brands and personalisation at the Centaur Festival of Marketing on 11-12 November 2015