Electoral system "bust" in most unrepresentative election to date 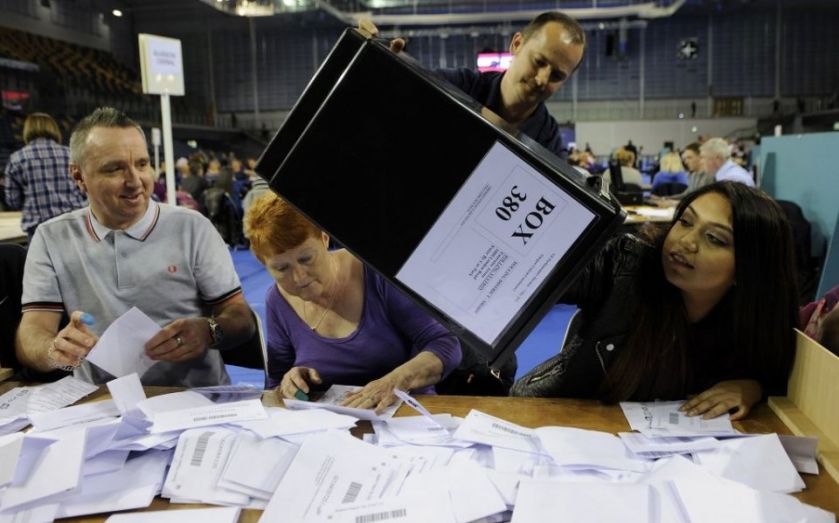 Westminster's voting system is "bust" following the result of the General Election, the Electoral Reform Society (ERS) has said.

In a report entitled "The 2015 General Election: A voting system in crisis", the ERS argued that the case for electoral reform was undeniable, following the "most disproportionate [result] in British history".

Read more: General election 2015 results mapped: Who's won where and by how much?

The Electoral Reform Society (ERS) estimated 22 million votes – almost three-quarters of the total vote – were effectively wasted. It also claimed that one in 10 people voted for someone other than their favourite candidate, marking a rise in tactical voting.

The election concluded in David Cameron's Conservative party winning a slim majority, winning 331 of Parliament's 650 seats, with just under 37 per cent of the vote.

Want a Ukip MP? That will take 3.9m votes

While just 34,000 votes were needed to elect a Tory MP, Ukip attracted 3.9m votes and won just one seat.

The party was backed by 12.6 per cent of voters, but its support was too thinly spread and so failed to succeed in certain constituencies.

Votes do not equal seats

The first past the post system – where each constituency is simply won by the candidate with the most votes – benefitted the Conservatives, Labour and the SNP in 2015.

Each party received a greater proportion of MPs than their share of the total vote – mostly owe to their vote being geographically centralised.

Polls conducted by YouGov, on behalf of the ERS, have aided predictions on how the result would have looked under an alternative system.

Under the single transferable vote system, used in Scottish Parliament elections, the Tories would have won 276 seats – 40 more than Labour. Meanwhile, Ukip would have gained 54 MPs – 53 more than it currently does.

Scotland highlights the "archaic and divisive" first past the post system

The ERS warned that that first past the post was "archaic and divisive", artificially dividing the UK after the SNP's landslide in Scotland. The party won 56 of 59 Scottish seats with 50 per cent of the vote north of the border, giving it an artificially high result in Scotland.

Labour, the Tories and the Liberal Democrats won just one seat each in Scotland. However, combined, they gained support from 47 per cent of Scots in the General Election.

"A voting system that was made for a different era"

A well-established political science measure of disproportionality is DV (Deviation from Voting) score. This gives a percentage of seats in parliament which are ‘unearned’ in proportional terms. A typical proportional system will give a DV Score of 5-8.

Voters went to the polls in the most unusual election in post-war years not knowing which of the parties were likely to play a part in the next government. This was at the outset projected to be the most unpredictable election in British politics in living memory; the resulting outcome also made it the most disproportional.

This was an election for multi-party politics, with seven party leaders going head to head in pre-election debates and a quarter of votes cast for parties other than the three formerly largest parties. But this fragmentation of support came up against a voting system that was made for a different era; one where just two parties fought over the votes. The result? A distribution of parliamentary seats that bears little relationship to the votes cast at the ballot box.