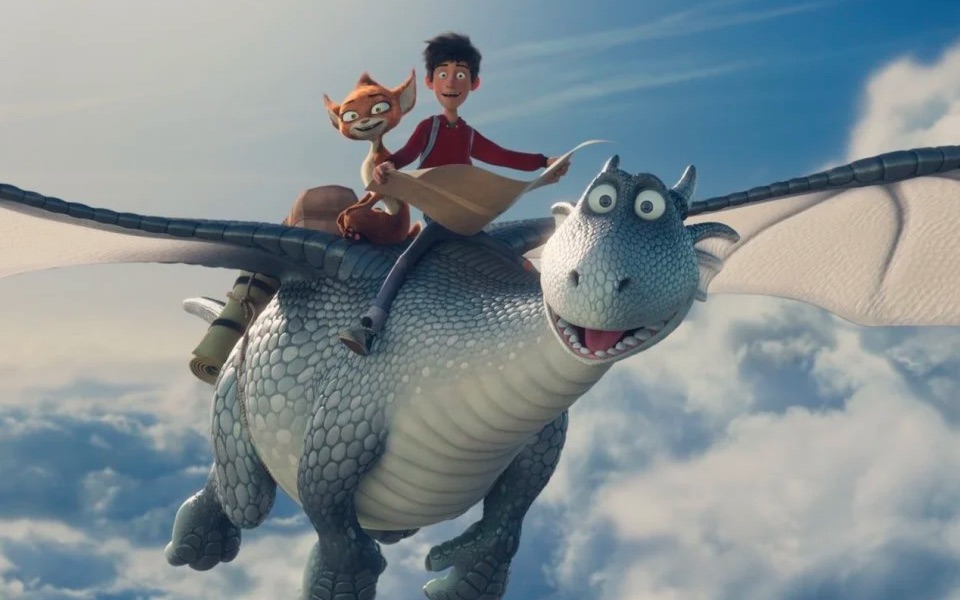 While most of the industry has scrambled to find a release strategy during the pandemic, animated family films have thrived thanks to captive audiences and a need for home-based entertainment. According to rating compiler Neilsen, Pixar’s Soul was the most watched content over the Christmas period, while films like Trolls World Tour and Scoob benefitted from On Demand releases.

Sky hope to get in on the craze with Dragon Rider, the latest in their slate of original movies coming straight to the Sky Cinema channel. It tells the story of Firedrake (Thomas Brodie-Sangster), a young dragon living with his kind in a hidden village far from the destructive tendencies of humans. When their home comes under threat, Firedrake and his best friend, a forest brownie named Sorrell (Felicity Jones) go in search of The Rim of Heaven, a legendary haven for dragons. On their way, Firedrake mistakes a homeless young boy named Ben (Freddie Highmore) to be a Dragon Rider, and the three embark on a dangerous journey pursued by murderous mechanical dragon Nettlebrand (Sir Patrick Stewart)

Let’s get this out of the way, shall we? Yes, it’s very familiar to the How To Train Your Dragon, both in how the film is animated and the basic plot (boy meets dragon and goes in search of a dragon kingdom). Even the font of the title is reminiscent of the 2000’s family hit, meaning a lot of people may mistakenly watch thinking this is a sequel or spin-off.

The film is different enough to distinguish itself (and, presumably, to ward off any lawsuits). It’s based on the novel of the same name that predates HTTYD, and there are definite differences such as dragons being able to talk and the motivations being different. Aesthetically, however, it leans into the comparisons, even nudging at the similarities with a scene set at the premiere of a film called How To Tame Your Dragon.

It doesn’t quite live up to those comparisons, as it has none of the grace or wonder of that trilogy. It’s a bouncy family comedy, no more no less. We get to join our heroes on a journey that sees them encounter mythical beasts, an aggressive genie (Nonso Anozie), and quarrelling prophets (Meera Syal and Sanjeev Baskhar). Moving at a breakneck speed, you never have to wait too long before the next action scene or colourful obstacle. Just the thing for young minds and short attention spans.

Read more: Pink goes offline as Covid takes the shirt off its back

The familiar voice cast complement impressive animation and a plot that is primarily concerned with laughs. Brodie-Sangster is earnest and sweet as the flying lead, flanked by Jones as the heroic sidekick. It’s Stewart that steals the show, however, hamming it up as a villain obsessed with destruction (there’s also a neat running gag about online dating).

Dragon Rider won’t live long in the memory, but it will kill an afternoon for families who have worn out the old favourites during lockdown. At less than ninety minutes, it flies off into the sunset long before you begin to notice the flaws.