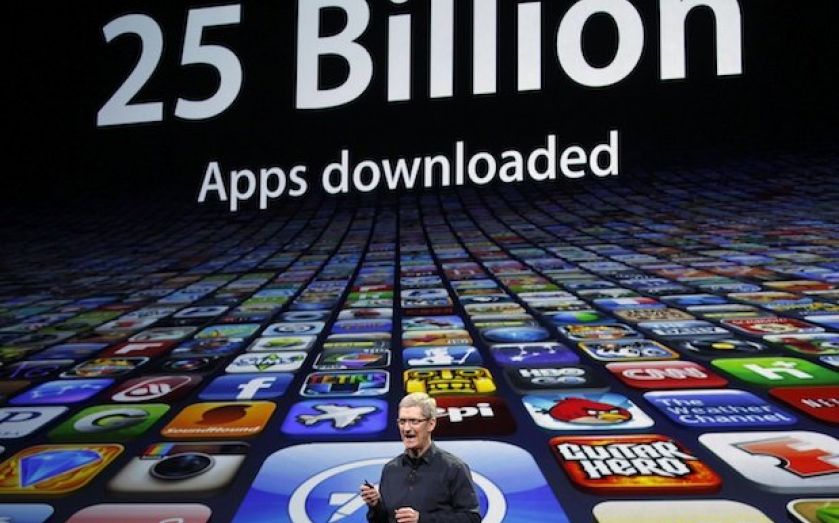 YOU CAN’T make money on the AppStore. Everything is free and you can’t get consumers to pay for anything.” That’s what I often hear from companies that have dipped their toes into the Apple ecosystem, failed to understand that it’s a new way of doing business, and drowned in the turbulent waters.

It’s a common attitude. It’s also wrong. Apple publishes a chart of top grossing apps, ranking them by the amount of revenue they are generating on the AppStore. Of the top 30 apps, 25 of them are free to download. There are 22 games in the top grossing 30, and 20 of those are free. The game currently at the top of the chart, Candy Crush Saga, is estimated to be on track to make $200m (£125m) this year. King, the London-based developer behind it, is said to have made a confidential filing for an initial public offering, with some commentators estimating that its market value could be in the region of $5bn.

Candy Crush Saga is not even the most successful mobile game in the world. That accolade belongs to Japanese game Puzzles and Dragons, published by GungHo, which made $113m in April 2013 alone. Finland’s Supercell, meanwhile, the maker of free gaming app Clash of Clans, was valued at over $3bn this week, after it sold a 51 per cent stake for $1.53bn.

While games are thriving, other businesses are struggling. The music industry has seen annual revenues from recorded music fall from $14.3bn in 1999 to $6.3bn in 2009. Book publishers and movie studios complain about the effects of piracy. The issue is not just one for digital products either. As 3D printers improve in quality and fall in price, we are heading towards an era where there is a cheap manufacturing facility in every village, and eventually in every house. Physical manufacturers often create their physical objects on a computer before they are manufactured, and these digital files can be shared every bit as easily as an MP3. Casual piracy is coming to the world of physical manufacturing too.

The secret to beating free is not to fight it, but to embrace it. Candy Crush Saga and Puzzles and Dragons show that free is not a spectre to be feared or to be fought against with legislation, rhetoric or by suing customers. To make money in the digital age, you must flip your thinking. Instead of being dazzled by the fear of free, figure out how the web creates new opportunities. The biggest opportunity is that it has enabled one-to-one communications on an unprecedented scale.

Successful businesses in the digital age will have three components. They will find an audience, probably using the power of free. They will use technology to talk to that audience again. They will let those who love what they do spend lots of money on things they really value.

King Arthur Flour, for example, is a US miller. Flour is perhaps the least digital of products, and the emergence of the web may not seem like a threat to King Arthur’s business. In fact, it is quite the reverse. King Arthur has a substantial free offering. Its website hosts recipe and how-to guides. It offers a free helpline, where trained staff will help panicky home-bakers with their baking problems. It has a website that sells kitchen equipment and recipe books. Its biggest fans will travel hundreds of miles to its Vermont headquarters, where it runs masterclasses on everything from making perfect croissants to gluten-free baking. It also sells flour, and is now the second largest miller in the US.

What companies like King Arthur Flour show us is that you can harness the web even if your product is undigital. You can create great content which you give away online. But that is not enough. You need to earn the right to talk to your customers again, whether by email, on Twitter, via subscription to a YouTube channel, or elsewhere. King Arthur still sells flour in supermarkets, but it also works to build a direct relationship with its superfans – who will spend tens or hundreds or thousands of pounds with the business every year.

The digital age doesn’t say that everything has to be free. It says that the era of one-size-fits-all pricing is over. Some of your audience value what you do highly; others value it barely at all. Use your existing distribution channels to find an audience, earn the right to talk to your biggest fans or best customers again and again, and let them spend lots of money – 10 times, 100 times, 1,000 times the previous average – on things they truly value.

Whether your product is free or expensive, you should embrace your freeloaders, your superfans and everything in between. If you do so, free becomes much less scary, and you will have adapted your business for the twenty-first century.

Nicholas Lovell is the author of The Curve (Portfolio Penguin), and advises companies on making money in a digital age. Find out more about The Curve at www.thecurveonline.com and about Lovell at www.nicholaslovell.com