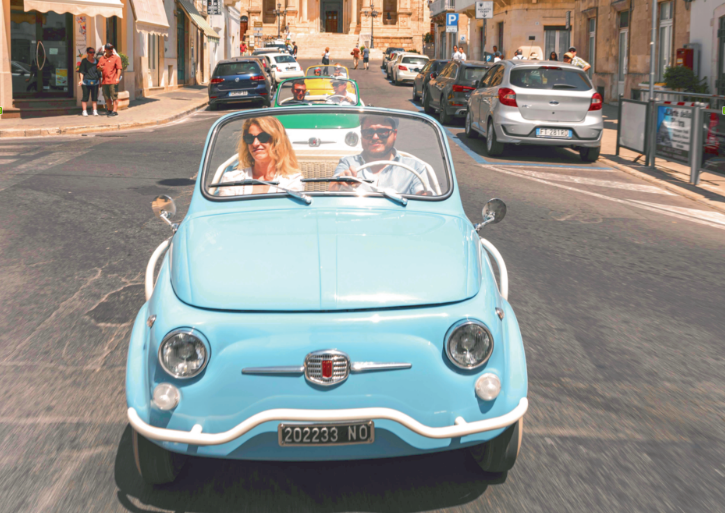 I’m touring the heel of Italy in a car with no seatbelts and ropes for doors.

Puglia is home to the mainland’s best and most remote sandy beaches, and a 1960s Fiat 500 Jolly is the Insta-perfect way to nip between sun-lounger, ancient towns, and the region’s ambrosial seafood restaurants. Known in its native land as ‘la spiaggina’, or ‘the little beach’, this is what it was designed for. La dolce vita in topless form. And now, a Milanese atelier has reimagined it for the summer of 2019. The body, the steering and the spirit are original, but now it runs on electric and is even more chic.

Garage Italia Customs is the bespoke builder and modifier founded by trustafarian style king Lapo Elkann, run out of a streamlined Bauhaus former petrol station. Lapo’s grandfather, auto-industrialist and playboy Gianni Agnelli, was the man who midwifed the Fiat 500 (pronounced ‘Cinquecento’). The ‘Jolly’ nomenclature came in when styling firm Ghia chopped the roof off it in 1957, sending the glamour needle off the scale. Grace Kelly, Aristotle Onassis – pretty much every millionaire and movie star on the Riviera – stepped off their yachts into one of these.

It’s been an emotional project for Lapo, who inherited Agnelli’s famous suits as well as his aesthetic verve. The 41-year-old has led a colourful, not to say controversial, life. In contrast, his Fiat 500 Jolly Icon-e is blissfully uncomplicated.

There is no roof, no seatbelts, no doors save a nonchalant rope that may have come from a Saint Tropez nightclub, and no storage space beyond room for a towel and a kaftan

Garage Italia has taken original hard-top 500s, removed the roof and doors, and improved torsional rigidity by inserting a safety cell. My Azzuro Volare blue car dates from 1970. The instrument panel is now digital, but the fascia is as sparse as ever. There are rocker switches to engage forward, neutral and reverse, headlights, and that’s it. There are two speeds; tortoise and hare. Maximum velocity is 85km/h and you’ll be well tanned by the midday sun before you get there, but that’s rather the point. There is no roof, no seatbelts (so go careful), no doors save a nonchalant rope that may have come from a Saint Tropez nightclub, and no storage space beyond room for a towel and a kaftan.

The combustion engine that sat in the rear has been replaced with an electric motor, while under the lid at the front is a box full of batteries. Power and components remain equal to those of the donor car to fulfil Italian homologation. The motor is flanged directly to the original gearbox. The brakes have a slight energy regeneration feature. The car sits on whitewall tyres from Michelin’s vintage line. Most beautiful are the seats, woven by hand in natural rope that adds to the outdoorsy nautical theme and will soak up wet beachwear.
All of this screams Ultimate Vacation Car, which is why Hertz is the project’s biggest customer. The Jolly Icon-e can be rented exclusively from Hertz’ Selezione Italia, which includes fast Alfas, Abarths and Maseratis, through to mid September. The rental price is €300 a day, which is quite a lot for such little horsepower, but bear in mind this tailor-made car retails at €50,000. That’s a mountain of cash for a holiday romance, but it’s also a playful statement for eco-conscious, modern-day Onassises.

As we touch down at Bari airport I notice how flat the scorched earth of Puglia is. A good thing, too, because I’m not sure the Cinquecento could manage hills. I’m staying in the seaside town of Polignano a Mare, 30 minutes down the Achilles’ tendon to the south. Known as the Pearl of the Adriatic, it promises crystal-clear waters and cliffs pitted with caves. My accommodation sits atop the most epic of these, with its acclaimed restaurant housed in a grotto. The Grotta Palazese’s romantic location has been on the foodie map since 1964, but the hotel rising above it only opened last month. The view from its 15 bedrooms, directly above the cobalt blue and turquoise sea, is matched only by the spellbinding blue marble floor – inspired by the vista –stretching throughout the suite.

A five minute walk through the narrow streets of the old town leads to a busy pebble beach surrounded by high cliffs and a hotchpotch of whitewashed buildings, comprising Baroque, Byzantine, Roman, Venetian and Greek architecture. Devouring the most vivid plate of sea urchin troccoli, tasting like filtered ocean spray, we watch a rather nervous gentleman 30 metres up on a rock ledge take the plunge into the pool below. This place is a mecca for cliff diving. Red Bull hosts a world championship event every June. I shan’t be trying it.

Every region of this charming country claims to have Italy’s most delicious food, but Pugliese cuisine has one of the stronger claims. It’s most often described as cucina povera – literally ‘poor food’ – and fish, offal and vegetables are the order of the day, as well as pasta of course. It produces over 100 varieties of bread, including taralli – a kind of pretzel softened with olive oil and sprinkled with tomatoes. Lamb’s intestines are popular with locals, as is ‘orecchiette con la rape’, small ear-shaped pasta. Burrata, a personal favourite, tends to be on every menu; the Shah of Iran was so addicted to this cheese he’d have it flown weekly from Bari to wherever he was in the world.

While Polignano is rocky, sandy beaches stretch further down this coast and, with our towels in the back of the ‘Spiaggina’, we set off for one of the many high-end beach clubs in the Parco delle Dune Costiere, belonging to the nearby ‘masseria’, estates traditionally owned by farming gentry. Eight kilometres of coastline between the Torre Canne and Torre San Leonardo is bathed in the searing sunshine, with seafood straight from fishing boats to the buffet table. The sea bass and spinach spaghetti is, I discover when ordering the pasta of the day, particularly fab at the tranquil and exclusive San Domenico beach club near Savelletri di Fasano – once home to the Knights of Malta – while, 20km further down the cream-coloured coast, Le Palme is more of a party hub, although the seafood is, again, a triumph. Given that the Fiat drives like a golf buggy, rather than an actual car, you might need to remind yourself you’ll be behind the wheel later and mustn’t order a third glass of Franciacorta.

It was the country’s Volkswagen, its people’s car. It mobilised the masses and liberated a nation

The ‘Spiaggina’ scurries silently through these characterful streets, but it immediately captures attention. The first thing you’ll notice about this car is people’s reaction to it. They smile, wave, toot their horns. The vintage Cinquecento really means something to Italians. Perhaps even more influential than the Mini was to Britain or the Beetle was to Germany, the tiny Fiat was the automotive embodiment of Italy’s post-war economic miracle. It was the country’s Volkswagen, its people’s car. It mobilised the masses and liberated a nation.

Bronzed up, or more accurately reddened, we head inland from here, past silvery olive orchards, towards the strange town of Alberobello. This picturesque place is a UNESCO World Heritage site due to its unusual districts of trulli, the fairy-tale conical-roofed houses of the area. A trullo is a small dwelling built from local limestone with dry-stone walls. Once, this was a town comprised of trulli alone. The story behind it was a typically Italian one; used on farms as sheds, Alberobello was built of trulli to fiddle taxes and fool the authorities.

The Grotta Palazzese restaurant, perched in a cave from which diners may watch the Adriatic lapping below, arrived on the scene just as the Cinquecento was becoming a fashion icon, establishing itself as one of the world’s most dramatically located terraces and a gourmet institution. This grotto has hosted banquets and parties since the 1700s, and lanterns and the sunset illuminate its natural beauty. The French discovered it on their Grand Tour of Italy, making sketches and watercolours. The artist Louis Jean Desprez’s painting of what became known as the Grotta Palazzese hangs in the Louvre’s permanent collection.

The four-course set menu on the night I was there is snapper tartare with melon and pomegranate; tubettino pasta with raw prawns and courgette; breaded sea bass and wild chicory with pistachio and yuzu; and for dessert, sweet cassata with raspberry chocolate and ricotta.
It is a menu born of local produce, gussied up but, in essence, joyfully simple. It’s the same philosophy as Garage Italia’s retro-moded roofless Cinquecento. For Italy-bound holiday makers, the latter is this summer’s must-have accessory.

Every bit as unforgettable as the seafood-serving grotto of Polignano a Mare, the Jolly Icon-e is ‘la dolce vita’ distilled and made sustainable, and it’s available at airport arrivals on request.

Room rates at the Grotta Palazese start at €550 through to €2,500 a night for suites. To rent the Fiat 500 Jolly Icon-e by Garage Italia, visit hertz.com/selezioneitalia