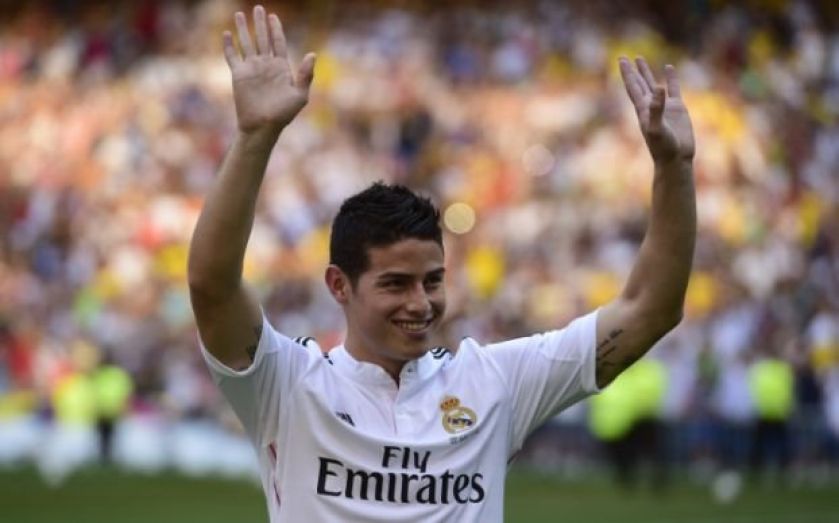 Adidas has refuted reports that Real Madrid sold 345,000 James Rodriguez replica shirts within 48 hours of his official unveiling at the Bernabeu.

After Los Blancos made the Colombian their latest "galactico" for a fee of £63m, it was widely reported that the club had sold an unprecedented number of shirts bearing the player’s name.

The frenzy for the no.10 shirt, which would have equalled 7,188 shirts sold every hour, was said to have earned the club roughly £20m. These figures were attributed to sports marketing company Euromericas.

However, it has now been claimed that those figures are incorrect.

An Adidas press officer confirmed to City AM that "this number [345,000] is not true" but declined to divulge the actual number of shirts sold.

We are happy with James at Real Madrid, he is a great player and we´re sure about his future in the team but these numbers are not true.

ESPN Deportes were also told by an Adidas insider that the reported figures came “nowhere near” the reality.

Founder and CEO of Euromericas Gerardo Molina did not dispute Adidas’s claim, but did say that it was impossible to deny a “James mania” sweeping the Madrid fanbase.

Molina said the agency had conducted “a study of sales demand and evaluated sales projections…with the same professionalism with which they have produced hundreds of reports, studies and surveys for 15 years.”

Euromericas are sports marketing company with offices in Buenos Aries, Beverly Hills and Zaragoza. Their website boasts of a high-profile array of clients including FC Barcelona, Mastercard, Barclays Premier League, Nike and HSBC.

According to a recent report put together by Repucom and PR Marketing, 13m football shirts were sold by 98 clubs in the top five European football leagues across the 2013/14 season, with 3.1m kits sold by clubs in La Liga during the period.

If original reports had been correct, Real Madrid would have sold over 10 per cent of that number in just 48 hours.