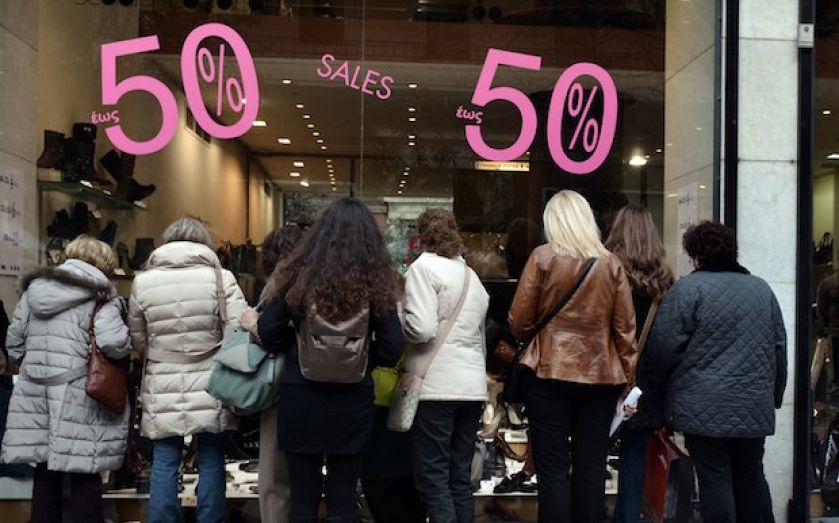 AT THE European Central Bank (ECB) press conference yesterday, Mario Draghi was asked whether the Eurozone is tipping into deflation and whether the ECB has the tools needed to respond if it does. “Deflation” has become a bogeyman, the thing economists normally agree to fear most. But is that right?

That deflation might be a bad thing may be a bit mysterious to most readers. Isn’t deflation prices falling? And stuff getting cheaper is bad because…well, because someone on TV who sounded confident said it was?

As so often in such matters, economists divide deflation into two kinds: the “good” kind and the “bad” kind. The good kind is when prices fall because things are becoming easier to make, the raw materials needed to make them are becoming more abundant or easier to obtain, or firms are competing with one another more effectively.

For the past couple of centuries, that’s been the normal situation. Typically, real costs of production fall as managerial and other efficiency increases, and as raw material costs fall. Globalisation and other pressures (like competition rules or the internet) tend to increase competitive pressure, bidding real prices down further.

Since such real cost falls are not evenly distributed across the economy, price signals would be most efficient if prices fell slightly most years (perhaps an average of around 0.5 to 1 per cent deflation per year). But deflation can be difficult to contain to just the small amount one might like.

Every economy will be subject to what economists call “shocks” – the ups and downs of the economic cycle. Often a negative shock – one that involves a recession – will also mean a fall in the rate of inflation, as banks cut back lending, businesses cut back borrowing for investment, and consumers cut back borrowing for consumption, leading to a drop in monetary growth. At the same time, cost pressures may fall as businesses freeze wages. If inflation starts at, say, 3 per cent at the peak of a boom, then it might fall back to perhaps 1 per cent in the recession. That fall in inflation may even help the recovery, as lower inflation means households with frozen wages face slower rises in prices and so feel less pressure on budgets.

But if we begin with a little bit of deflation and then get a shock, a less benign process can start. If deflation reaches 3 per cent (ie if prices are falling at 3 per cent per year), that is almost certain to mean wage bills are falling (not frozen). So either workers are becoming unemployed, or they are having their salaries cut (not simply in real terms, by inflation, but actually cut in money terms). Unemployed workers with large debts are likely to default on them. And households with debts that are fixed in money terms will find the burden of those debts gets larger and larger if their salaries are being cut each year – meaning they might default too. Meanwhile, falling prices means firms with large debts have lower revenues to service those debts, and they may also default.

If firms and households default on large debts – eg on their mortgages or their credit cards – that means losses for the banks that lent them the money. But if banks make large losses, they may become even less willing to lend, and of course households and firms become less willing to borrow. So the money supply may grow even slower (possibly even shrink), and deflation gets even greater, so wages fall faster, there is even more defaulting, and so on in a vicious circle of decline.

Could it be happening in the Eurozone now? Inflation there was 0.7 per cent in the year to January 2014, which is comfortably above any deflationary danger threshold. There has been quite significant deflation in Greece recently. But Greece is already about as bust as it could be, and even large falls in wages and prices are more likely to help address its 30 per cent unemployment rate than to hinder.

Elsewhere (like in Ireland) there has been some deflation, and some cost shocks (like Iraqi oil production expansion) could conceivably tip the Eurozone as a whole into modest deflation. But modest deflation – around 0.5 to 1 per cent – is much more likely to help the Eurozone, by cutting pressures on household budgets, than to hinder. And the ECB has plenty of tools available (such as QE) if it needs them.

Deflation could become dangerous at some point in the Eurozone. But at this stage, it appears more likely to be the benign kind than not.

Andrew Lilico is chairman of Europe Economics and a member of the Shadow Monetary Policy Committee.