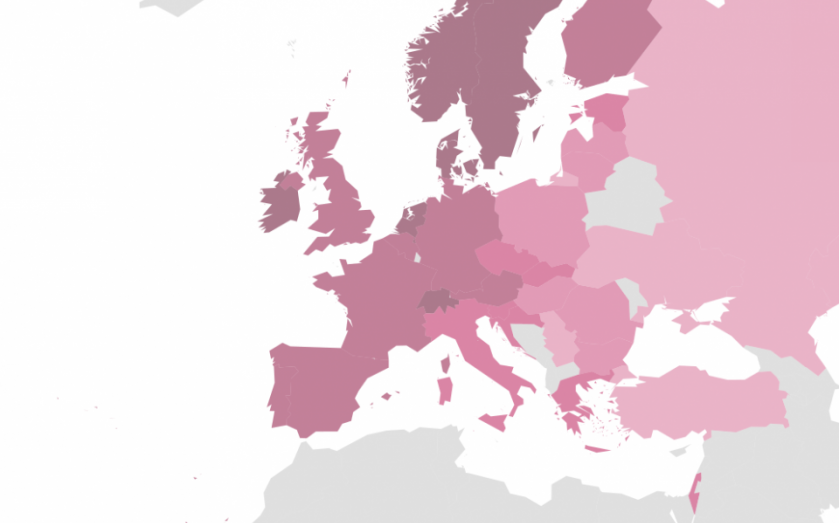 The UK had the fourth-highest total household debt in the world in 2013.

According to research by Allianz, the European insurance company, the total amount of debt in the UK stood at £1.8tn last year, or 95 per cent of (then) GDP.

That figure equates to a per-capita debt of €29,550: high enough to place the UK eleventh on the list of 53 countries, which includes the world's major economies.

You can use our interactive map to explore the per capita data.

The darker the colour, the higher the GDP per capita. Clicking on a country will show you how the per capita debt has changed since 2008, with blue charts indicating a drop.

To scroll past this visulaisation on mobile, swipe down on the right-hand side of the screen.

Only three countries, the US, Japan and China were ahead of the UK on the per-capita measure, and the top-ten list reads like a who's who of developed economies. 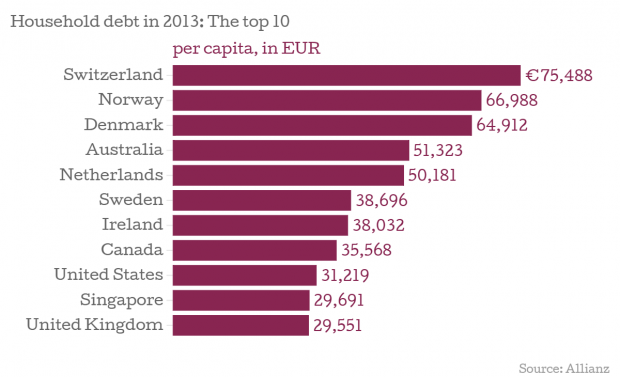 Here is the top ten for household debt. Again there isn't a developing economy among them:

When the figure was viewed as a percentage of GDP, the UK was placed ninth on 95.8 per cent, with Denmark leading the way. There are some large jumps on the list, which includes some prosperous nations and two, Ireland and Portugal, that were bailed out during the crisis.

When we look at changes in the level of debt since the financial crisis the UK comes out better (or worse, depending on whether you want a stronger, consumer-driven recovery) and has reduced hosuehold debt as a percentage of GDP by 9.3 per cent, the sixth biggest drop.

The data really tried to break this chart, and the labels are trying to push the bars on to the page, but here are the biggest percentage drops in household debt per capita:

Greece actually saw household debt per capita fall while debt as a percentage of GDP fell, because of the way the economy has suffered since 2008. It is worth bearing possible changes in GDP in mind when looking at the above chart. It's a rough guide.

China leads the way on percentage increase in household debt over the last five years, hotly persued by Argentina.

China, which is trying to build a consumer-based economy, has endured a per-capita household debt increase of over 300 per cent.

Argentina's rise is very similar, but what some say are artificially low inflation rates may have obscured the true figure.

The countries with the biggest increases tend to be developing economies with rising middle classes, such as China, while the most endebted countries are more developed economically, with strong consumer-based economies and higher levels of GDP per capita.