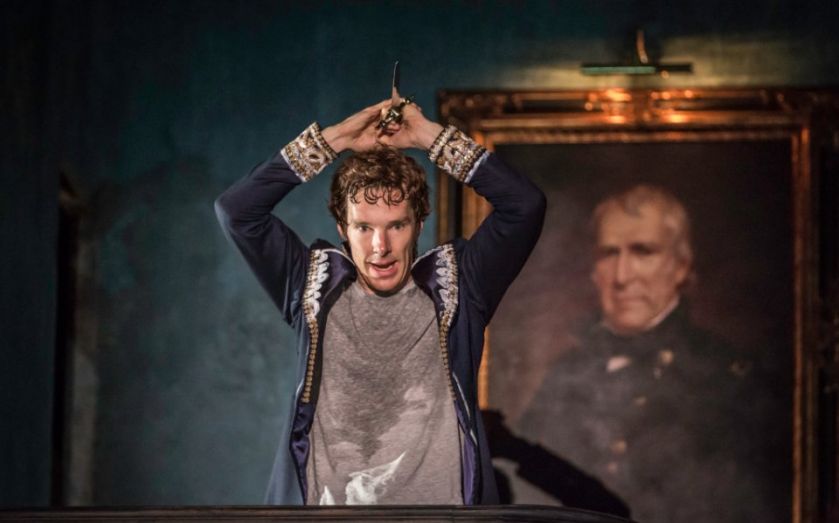 “We are all Hamlet” booms the programme of The Barbican’s – nay, the world’s – fastest-selling play of all time. It means that Hamlet’s such a broad part, he can be played as a lunatic, a depressive, a Machiavellian and even, heaven forbid, a woman. But while we can all be Hamlet, we can’t all be Benedict Cumberbatch. There’s only one of those and, let’s face it, it is the effervescent glow of his celebrity that has drawn the hordes to this production.

And glow he does, his perspiring brow shimmering under the lights. He throws his full physicality into the part, thrashing about like an eel and sprinting from one end of the stage to the other. He drags Gertrude across the floor during the Closet Scene and, in the throes of madness, marches like a toy soldier in full military dress. He even pulls a miniature castle on to the stage to clamber in and out of. You get a whole lot of Cumberbatching for your money. But while these moments draw laughs and gasps, his real skills are apparent in the quieter moments. His soliloquies, particularly “O, what a piece of work is man”, are shot through with an irresistible sincerity and whip-smart sense of irony.

The set is almost as impressive as Cumberbatch – a lavish country manor filled with crystal chandeliers and overgrown vines. By the second half, the state of Denmark has crumbled to a pile of rubble and scaffolding.

Alas it seems that all of this production’s energy has been expended on its leading man and his immediate surroundings. The supporting cast have little chemistry. There’s no sensuality between “th’ incestuous” heads of state; Polonius is servile and bumbling and Horatio is a one-note uni pal. Ophelia, played by RSC regular Sian Brooke, provides the only truly moving moment of the play, as she stumbles across the debris to her impending death. She’s undoubtedly the strongest of the supporting cast, but the power of her scenes owes as much to Jon Hopkins’ haunting, crunching electronic score than her performance.

It’s an uneven production, and director Lyndsey Turner seems torn between her artistic and popularist instincts; her much-talked about reverse ferret on whether to open the play on “To be or not to be” being a good example. You can make a blockbuster Hamlet or you can defy convention; this production is stuck somewhere in the middle.

Ultimately, though, this is still a triumph for Cumberbatch. Not for leading a definitive production, but for grounding it in substance while the circus screamed around him.