Data from CryptoCompare shows that the price of Bitcoin moved up slightly over the past week. After starting the week at around $20,500 and dropping to a low near the $20,000 mark, the cryptocurrency’s price surged to a $21,500 high, before returning to $20,700.

Over the week, CryptoCompare revealed that the annualised 30-day volatility has fallen to the lowest point in the year for multiple cryptocurrencies, particularly layer-1 blockchain tokens. Bitcoin’s volatility reached a low of 26.8% on October 22, while ETH’s volatility also reached an annual low of 31.9% on the same day.

The volatility reduction is believed to be a result of declining interest in digital assets from retail market participants over their negative price performances year-to-date. Despite the drop in interest and volatility, adoption has been growing.

Over the week, global digital payments firm MoneyGram added a feature to let users of its mobile app in nearly all US states buy, sell, and hold cryptocurrencies. The service offers Bitcoin, Ether, and Litecoin.

The functionality is being enabled by cryptocurrency exchange Coinme, which saw MoneyGram make a strategic minority investment in it earlier this year. The investment followed MoneyGram’s move with Coinme to let customers buy and sell BTC for cash at 12,000 retail locations in the US.

On top of that, multinational banking giant JPMorgan executed its first-ever trade using decentralized finance (DeFi) on a public blockchain. The trade was executed using the Polygon (MATIC) blockchain and a modified version of the Aave lending protocol.

The bank issued tokenised S$100,000 (US$71,000) as part of the Singapore central bank’s pilot programs exploring the use of decentralized finance in the banking sector. JPMorgan then traded the tokenized Singaporean dollars for tokenised yen with Japan’s SBI Digital Asset Holdings, DBS Bank, Standard Chartered, and HSBC.

Moreover, Meta is developing a non-fungible token (NFT) minting and trading feature through its Instagram application, according to an announcement from the company. The feature will allow users to create and launch their own NFTs for sale through the platform.

Meta’s Head of Commerce and Fintech, Stephane Kasriel, said in a statement that a “small group of creators” will soon be able to use the feature. NFTs are unique blockchain-based tokens that represent ownership over an asset.

Retail market participants’ lack of interest was made clear when Nasdaq-listed cryptocurrency exchange Coinbase released its third-quarter results, reporting 8.5 million monthly transacting users (MTUs) during Q3, down from 9.2 million in Q1. Analysts were expecting 7.84 million users for the third quarter.

While retail interest in the market has dropped, CryptoCompare’s 2022 Outlook Report found that Bitcoin holders of varying sizes are accumulating during the market downturn. The trend comes in contrast to the last crypto bear market, in which holders across different wallet sizes were panic-selling.

Notably, Bitcoin accounts with over 10,000 BTC holdings are also adding more coins, likely as a result of growing institutional adoption. 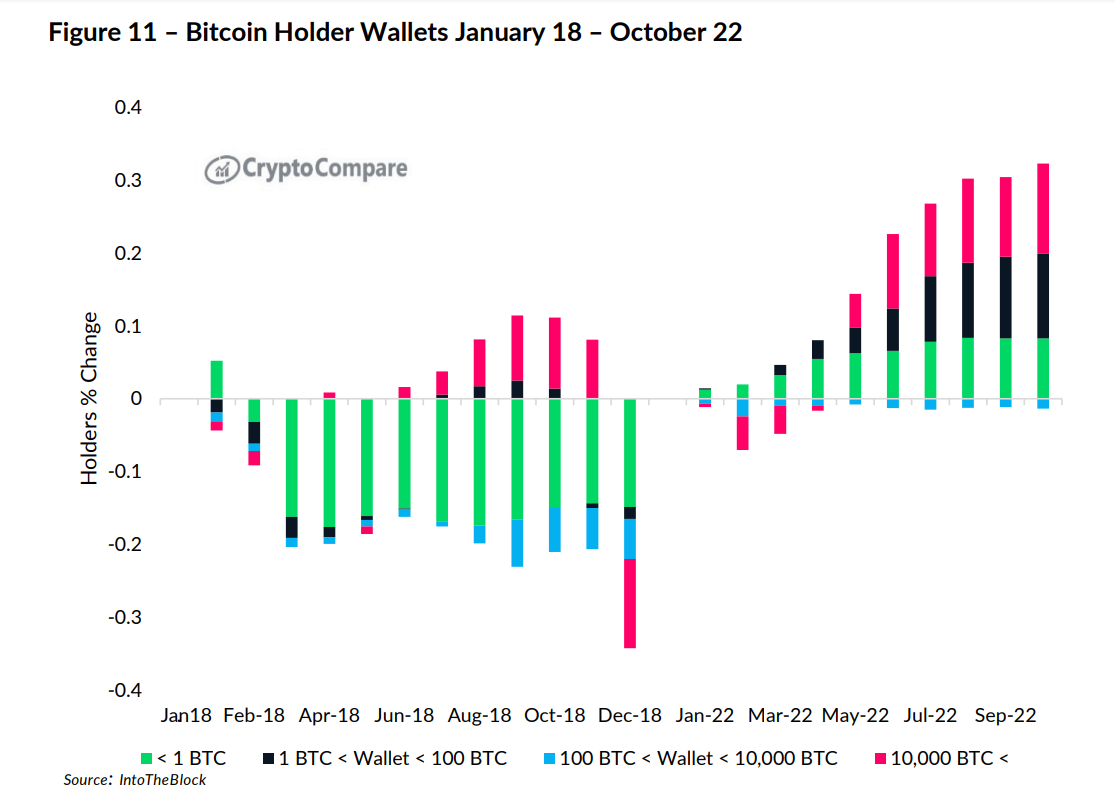 The accumulation trend is being seen even at a time in which Bitcoin and cryptocurrencies have so far failed to act as an inflation hedge, bringing into question a long-proposed narrative by digital asset natives.

Nevertheless, retail investors’ activity in the market surged over the past week after Tesla and Space X CEO Elon Musk completed his acquisition of the microblogging platform Twitter. Investors piled on the meme-inspired cryptocurrency Dogecoin, speculating Musk will use DOGE in some of Twitter’s future features.

Musk is a well-known Dogecoin supporter who has said the meme-inspired cryptocurrency is his favorite cryptocurrency. Tesla accepts Dogecoin payments for merchandise on its website.

MakerDAO to be divided into smaller entities

A majority of the members of Maker’s decentralised autonomous organisation (DAO) have voted in favour of introducing eight Maker Improvement Proposals (MIP), which bring in MetaDAOs and activate a new vault to generate more revenue for the protocol.

The move will mark the project’s largest restructuring in its history but has created two opposing factions with MakerDAO: the MetaDAOists and the Constitutionalists.

The MetaDAOists are in favour of the Endgame plan, which is supported by Maker co-founder Rune Christensen, while the Constitutionalists oppose it. The Endgame plan is meant to make the protocol resilient to blacklisting.

Each MetaDAO would have its own native governance token distinct from MKR, according to the proposal. Among the MIPs was also MIP84, which if approved, would effectively set aside excess DAI to purchase staked Ethereum (stETH), a token representing Ethereum earning yield while staked on the network.

Francisco Memoria is a content creator at CryptoCompare who’s in love with technology and focuses on helping people see the value digital currencies have. His work has been published in numerous reputable industry publications. Francisco holds various cryptocurrencies.