4 July reopening: Soho to sizzle as street festival kicks off this weekend 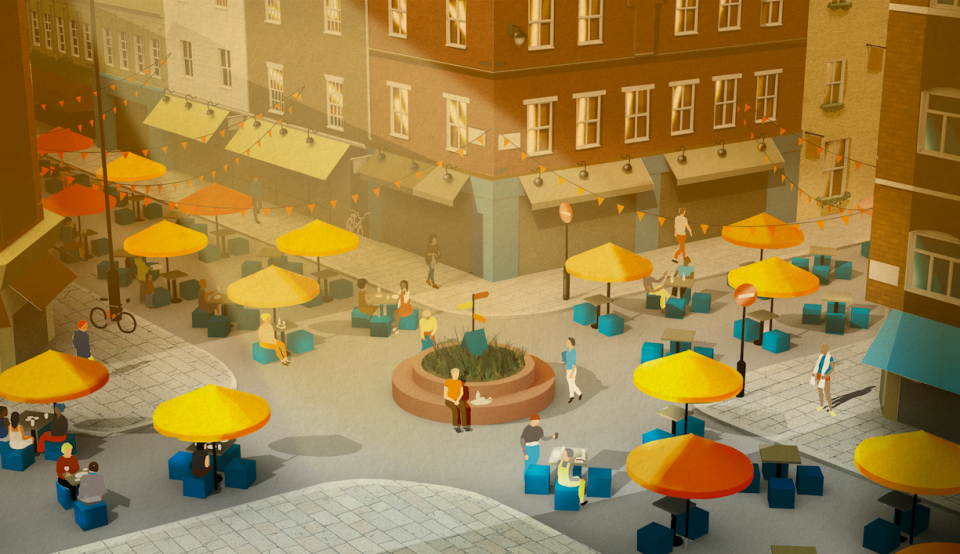 The West End is set to be the epicentre of 4 July reopening revelry this weekend with newly pedestrianised streets heralding what some are calling “The Summer of Soho”.

Westminster Council have now confirmed that a number of streets in the famous entertainment district will be closed to motor traffic. That will allow venues to spill out onto the streets to allow trading despite still strict social distancing rules.

The change for the 4 July reopening of pubs, bars and restaurants means al fresco drinking and dining can become the norm during a vital summer for some of London’s hotspots, all of which have taken a heavy hit from the Covid-19 lockdown.

Venues will even be ‘donating’ staff to the cause, marshalling the number of people entering the area throughout the opening weekend.

And for many in the trade, it can’t come soon enough.

Soho House’s Andrew Purcell told City A.M. that a number of their properties will be opening up this weekend: Cafe Boheme from 9am, Dean Street Townhouse from 10am, and for members Soho House from midday.

The expectation is that they’ll run at about 50 per cent of their usual trade as the capital gradually reopens, and reservations bear that out. But like everybody, he’s hopeful.

“I think it’s great. This is what we want to do, this is our choice of career. To be able to operate again – in some sort of way – is great and all our staff are really excited,” he tells us.

“We’ve had some staff in to freshen up the spaces and make them look semi-new for the reopening, and a lot of our reopening staff have been in this week going through the guidelines and everybody is really positive about getting back into work.”

If they can make it work, he believes others will follow after the 4 July reopening weekend.

“The quicker we get retail and hospitality back, the quicker the theatres get back.”

Cheers to that, from all at City A.M.

A map of street closures is available from campaign site Save Our Soho.

Bars and restaurants also opening over the weekend include:

Pastaio will reopen with free meals for under 12s all summer. NHS key-workers will receive 50% off their bill and 25% off for hospitality workers, students and over 60s

Poppies Fish & Chips Poppies is back and gifting guests a free glass of wine or bottle of beer when they next dine in, available to redeem via their website

Sola will be re-opening with a brand new summer menu

Bar Italia will be offering NHS and key worker discounts

Zima Restaurant will celebrate re-opening by raising money for their charity partner ‘Gift of Life’ – 10% of every pound spent at Zima in the first week will be donated to the Russian children’s cancer charity. Every dining guest for the first week (between 5-7pm) will get a complimentary Russian ice cream called Plombyr.