The FTSE 100 sank to its lowest level since January yesterday after mining behemoth Glencore failed to reassure investors with its response to a global slump in the price of metals.
Shares in Glencore tumbled nearly 10 per cent to a record low of 158.95p, while stocks in fellow mining giants Rio Tinto and Anglo American suffered falls of around four per cent.
The relentlessly bearish oil market has also taken its toll on Glencore. The price of US crude dropped to its lowest level for six-and-a-half years last night due a massive stockpile across the pond which has stoked fears of a global glut in the so-called black gold.
The FTSE 100 closed at 6,403.45 – its lowest value in over seven months. The last time it fell below this was 14 January, when it finished the day at 6,388.46. The blue chip index was trading at 7,122.75 when it hit its record high in April. All but five FTSE 100 shares ended in the red yesterday.
Anxiety has been heightened by the relatively uncertain state of China’s economy, which is one of the world’s biggest metal consumers. 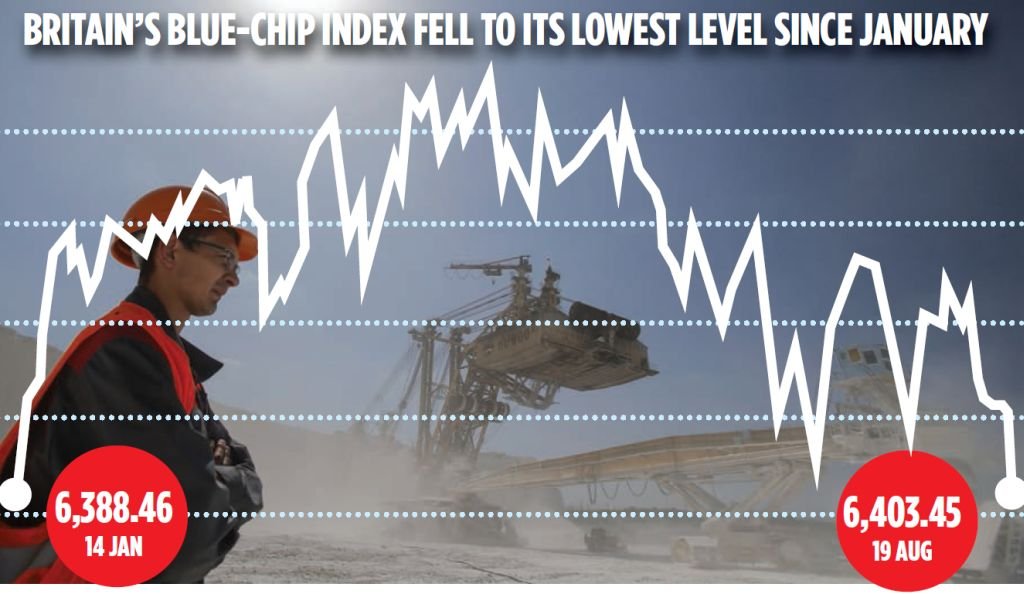 Rocked by volatility, the Shanghai Composite Index has lost over one quarter of its value since peaking at 5,166.35 in the middle of June.
The most optimistic predictions for the FTSE are looking a long way off. At the beginning of the year, analysts at several major investment banks said the FTSE would rise clearly over the 7,000-mark, with some even predicting a year-end close to 8,000.
While the Chinese slowdown and depressed commodity prices are chipping away at optimism, not everyone is downbeat.
“The market’s got itself into a tizz, it’s overdone pessimism,” said Mark Dampier of Hargreaves Lansdown. “There’s lots of cash sitting on the sidelines.”
Admiral led the few risers yesterday with gains of 3.82 per cent, closing at 1,552p. Hikma Pharma – ceuticals and housebuilder Persim – mon made gains of around 2.5 per cent each.
Some key commodities continued to fall, however, with copper prices sliding to a six-year low of below $5,000 a tonne.