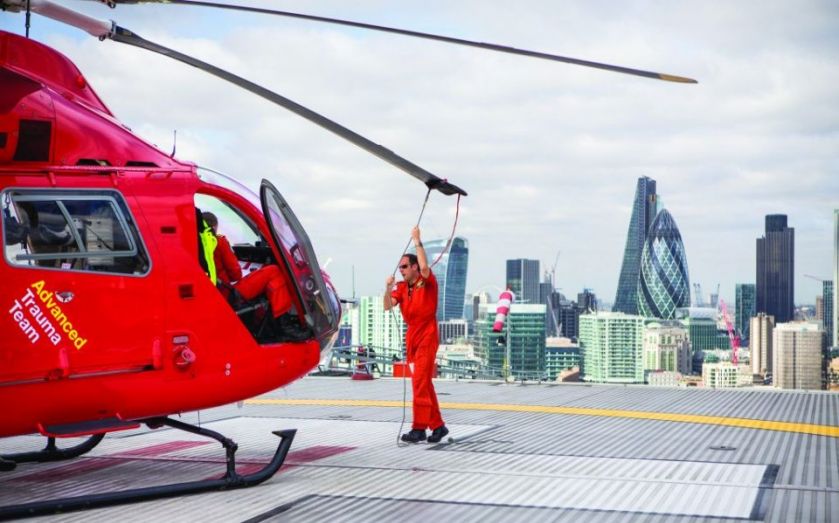 London Air Ambulance is today launching a public campaign to raise an extra £4.4m for a second helicopter for the capital.

Many in the Square Mile have already got behind the cause, with £600,000 being raised from City-based businesses, including £250,000 from BlackRock.

Aberdeen Asset Management chief executive Martin Gilbert is a patron of the London Air Ambulance charity and told City A.M.: “I became a patron because I was taken aback to find out the capital was covered by just the one emergency medical helicopter. It’s a tremendous charity saving life and limb of people across London every day and I urge everyone to make a donation to fund a much needed second aircraft.”

Through the Your London, Your Helicopter web campaign – yourhelicopter.london – LAA is appealing to “the people and businesses of London to help us raise the remaining £4.4m for the second helicopter and extended flying hours”.

The Libor fund has contributed £1m to the charity.

Mayor Boris Johnson lent his support to the campaign, saying: “London is the greatest city in the world and is also one of the most generous cities in the UK. We rightly rally together to rapidly raise millions for disasters in other countries around the world but on this occasion, the need is right here on our doorstep.”

A spokesperson for the LAA said: “London is a world leader; however, it is one of the few major cities in the world with only one emergency medical helicopter. We serve a population of more than 10m people. Elsewhere in England and Wales there is a ratio of one helicopter per 1.5m people.”