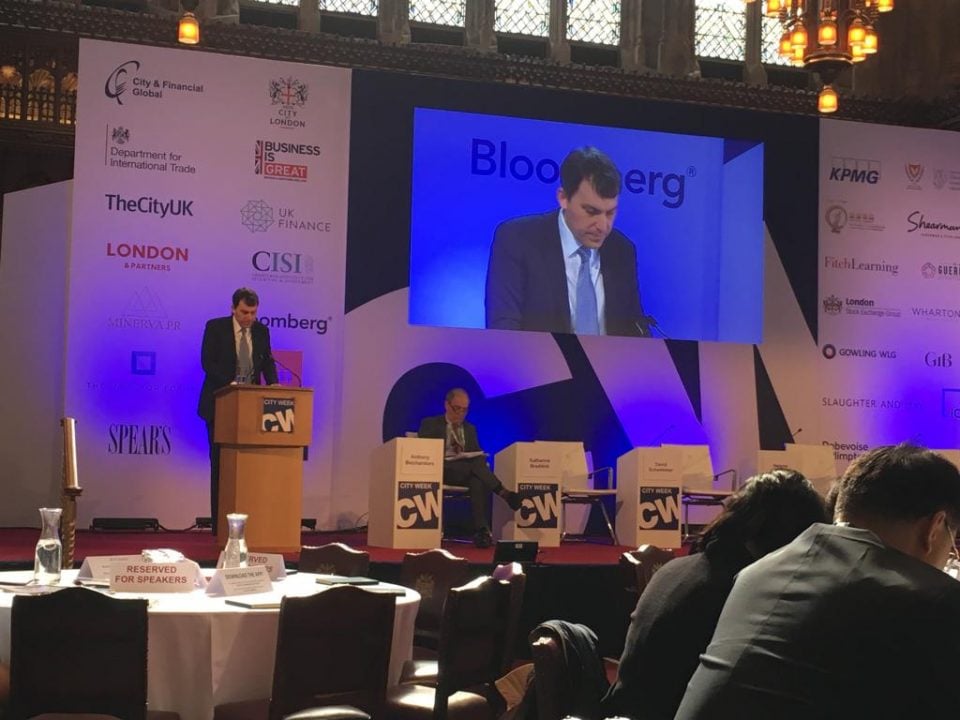 Diverting from the EU’s financial regulations after Brexit will not deliver “an enormous economic dividend”, the City minister has warned.

Read more: Andrew Bailey is right to think about the City's future

Speaking to City A.M. after delivering the opening speech at the City Week conference in London today, John Glen said the majority of Square Mile firms want a reliable regulatory environment instead of a less secure, looser relationship with the EU after Brexit.

His comments contrast with the head of the Financial Conduct Authority Andrew Bailey, who last month argued for a looser arrangement with the EU after Brexit.

Speaking at the Guildhall, Glen said: “What the City of London wants is clarity over what the future relationship is, in the sense they will adapt to whatever that relationship is.

“But we can’t compete globally on the basis of regulatory arbitrage where we’re trying to find a clever less regulatory environment that somehow we are then all of a sudden the destination of choice.

“It won’t work like that because what people want is a reliable ecosystem which is what we have in the City.

“So the notion that we can detach ourself from the EU and have an enormous economic dividend in the City is I think a very hopeful and ill-judged conclusion to come to.

“What we want is clarity over that future relationship. We want a fair settlement in terms of us leaving the EU but knowing what the dynamics of that future corporation will look like.”

Glen said he recognised people in the City are “frustrated and in despair” at the state of the Brexit talks, but said there was “little point empathising with the uncertainty”.

Instead, he focused his speech on four key areas of activity for the financial sector: green finance; fintech; India; and China.

With a plethora of Conservative MPs throwing their hats into the ring for the upcoming leadership contest, City A.M. asked Glen if he would put his name forward for the top job.

“I’m a junior minister in the Treasury. I’m deeply committed to serving as a minister and it’s been a privilege to do this job but I don’t think I’m the right fit at this time,” he said, adding: “I think there are better, more qualified candidates who have had more experience in the Cabinet over a long period of time and I think it’s really important we have somebody who can command the respect of the senior members of Government and lead us through what will be a very, very difficult time.”