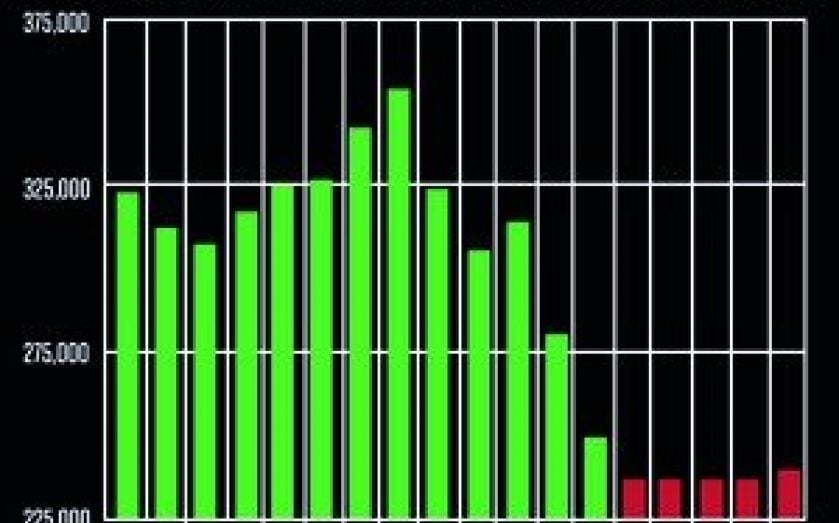 THE NUMBER of jobs in the City is set to hit a 20-year low as London firms continue to lay off staff in the face of ongoing economic turmoil. City A.M. has been given exclusive access to figures from the Centre for Economics and Business Research (CEBR) – and the prognosis for London’s financial services industry is not good. The consultancy estimates 237,000 people will work in “City-type jobs” in 2013, down a third on pre-crash levels. This represents the lowest number of financial services roles in the capital since 1993. At the height of the boom years in 2007, the number of financial services jobs in Canary Wharf, the West End, the Square Mile and elsewhere hit a record high of 340,000. In a further sign that the economy is still struggling, the figures come the day after a survey of purchasing managers showed slower-than-expected growth in the broader UK services sector during October. “The fall in activity is partly a function of the weak economy, partly a hangover effect from the financial crisis and partly caused by increasing regulation which limits access to bank cash to bankroll financial transactions,” said Douglas McWilliams, chief executive of CEBR. “The business model for many firms in the City – which was based on taking a percentage from yields of eight per cent plus – has to change in a world where low yields are likely for many years to come.” CEBR predicts the number of London financial services jobs will bottom out at 236,000 in 2014 before returning to limited growth in the following years. However the organisation has already had to substantially revise down its prediction for 2013 and warns that “deeper cuts into the muscle” are on the horizon. Much of the blame lies with a downturn in City activity since the middle of this year. Equity trading is down by around 20 per cent, gilt trading is down by a third and even the generally resilient foreign exchange markets have seen a reduction in activity. But investment banks have suffered most of all as M&A activity has almost ground to a halt. Total UK deal volume dropped 29 per cent between the second and third quarters of 2012, according to Thomson Reuters. This year there has only been one major IPO on the main London market – insurer Direct Line Group – and that only occurred because RBS was obliged to dispose of the unit on orders from the European Commission. As a result of these market pressures, last week UBS announced substantial job cuts at its investment banking arm, with around 3,000 of the bank’s 6,600 London staff facing compulsory redundancy. Some traders at the bank’s offices by Liverpool Street turned up to work last Tuesday only to find that their keycards had been disabled and they had been put on leave with immediate effect. Nomura, Deutsche Bank and Credit Suisse have also announced substantial job cuts that will affect the City. Not only will frontline staff be affected, but back-office admin roles will also go as leading firms wield the axe.