Can The Rise of Skywalker reawaken Disney’s Force? 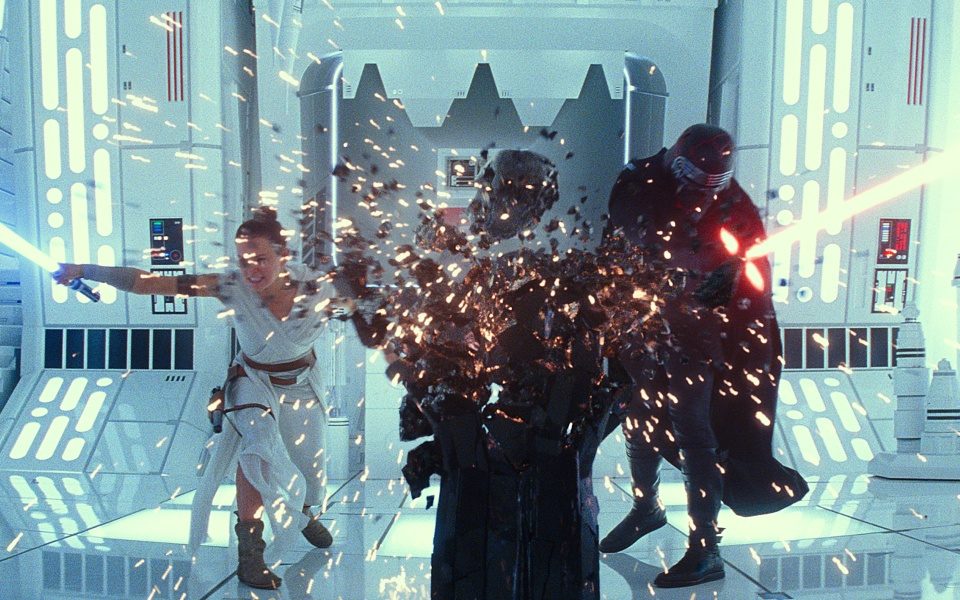 These are dark times for the Disney Empire. The unified celebration that greeted its first two Star Wars entries (The Force Awakens and Rogue One) descended into rebellion with the release of The Last Jedi, one of the most divisive films in recent memory. Then came Solo, the first Star Wars movie to lose money.

With future plans in flux, this is the last big screen adventure for the moment, with the franchise finding success in TV with The Mandalorian. Following the departure of original director Colin Trevorrow, JJ Abrams has returned to close out the journey he started with The Force Awakens.

One criticism of his previous film was that it leaned too heavily on nostalgia. If that’s a problem for you, then The Rise of Skywalker is going to be a bumpy ride. Every possible reference and Easter Egg you can think of is jammed into this carnival of fan service. But once the sugar rush of sentiment fades, it becomes clear these baubles are a distraction from a plot with no life.

We catch up with Rey (Daisy Ridley) still fighting against both The First Order, and the dark visions of her own future. On the other side is Kylo Ren (Adam Driver), racked with guilt at the deeds of his past and unsure what to make of his connection with Rey.

But once the sugar rush of sentiment fades, it becomes clear these baubles are a distraction from a plot with no life. We catch up with Rey (Daisy Ridley) still fighting against both The First Order, and the dark visions of her own future. On the other side is Kylo Ren (Adam Driver), racked with guilt at the deeds of his past and unsure what to make of his connection with Rey.

The trouble is, we’re not too sure what to make of it either. This is a conclusion for characters who haven’t been given time to breathe, the results of varying artistic and commercial visions that feel incomplete. Without the requisite development, we get supposedly climactic confrontations that are important only because the script says they are. Most of the contentious aspects of The Last Jedi are reworked or forgotten quickly, with certain twists feeling like a direct response to fan outrage. Whether these changes are right or wrong is subjective, but they come too late in the game to be implemented naturally. In short, the ending feels empty when we’re asked to forget about the middle.

This isn’t to say it’s a disaster. The visual spectacle is awesome, from nightmarish caves to roiling oceans. It feels like a galaxy far, far away, and one you’d quite like to visit. There’s also plenty of fun moments as we accompany Finn (John Boyega), Poe (Oscar Isaac) and various others as they race between planets, interacting with cute new sidekicks vying for Baby Yoda’s crown.

READ MORE: Why Once Upon A Time In Hollywood is the film of a generation

There are thrilling fights, funny jokes, and, aside from the often excruciating dialogue (never really a strong point in the Star Wars universe), it’s a fine experience.  And that’s the problem: Star Wars has never been just ‘fine’. Whether you left the cinema punching the air or seething with rage, every one of these stories made you feel something.

Even the worst entries had moments that took your breath away. For all the visual effects, all the speeches, it’s hard to think of a moment in this film that anyone will be referencing in 20 years. Trying to please everyone has resulted in a film that’s apparently happy to be average. All of a sudden, Star Wars doesn’t feel special anymore.

Most cheated by all the indecision are the younger cast members, who do their best with characters who have been pulled in different directions over the course of three films. Isaac’s Poe fares best out of them all, showing some progression as he struggles to become the leader he knows he has to be.

He forms a charming partnership with Boyega’s Finn, with the friends working to build an army to launch one last offensive against The First Order. Ridley is given the most screen time, which is a good thing given the seismic shifts in character she has to perform. She navigates these sharp turns well, steering Rey towards a plausible – if unsatisfying – conclusion.

Adam Driver may be the actor whose stock has most risen since the films began, but a role this slight would leave even the most talented stars stranded. Ben/Kylo’s conflicted stance means he’s lost in the shuffle. He’s not the hero of the story, but nor is he the villain. His arc has potential, but with the focus elsewhere, he often feels like a character from an entirely different film. He’s someone for Ridley to spar with, to run to and from. Aside from one waterside heart-to-heart, his journey is mainly to service his co-star. Of all the under-developed characters in this trilogy, he’s the most wasted.

As for the old guard, Lando Calrissian (Billy Dee Williams) returns for little reason other than he’s the last original character who hadn’t already reappeared. Like the film in microcosm, his appearance is fun but pointless. It’s also time to say goodbye to the late Carrie Fisher, of course, with the production working-in previously cut footage to round out her performance. It isn’t seamless, but it’s at least respectful.

The Rise of Skywalker is a film designed to calm the waters, but is that what Star Wars really needed? It’s true that The Last Jedi took some narrative risks that didn’t pay off, but a follow up that plays it safe from beginning to end hardly seems preferable. What should feel like an epic conclusion to a 42-year-old story instead acts as proof that the franchise that has lost its way.