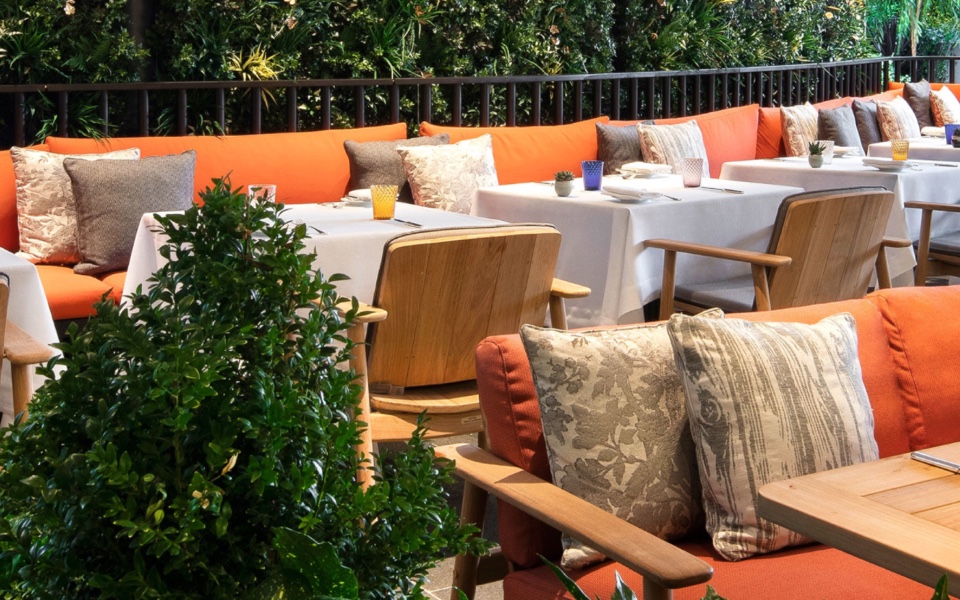 Despite Londoners gritting their teeth through one of the wettest Mays on record, outdoor space has never been at more of a premium. We may now be allowed to eat indoors, but social distancing has drastically reduced the number of covers most restaurants can accommodate and the pandemic has reinforced the pleasures of al fresco dining on the psyche of a nation already used to navigating the mercurial nature of our climate.

Recent photographs of hardy little groups of drinkers forming makeshift tents from parasols so they can continue their afternoon sessions despite torrential rain only served to highlight our commitment to this new outdoor paradigm.

Thankfully there is no tent-making necessary if you decide to dine in the more rarefied environs of Mayfair’s Cafe Biltmore, Jason Atherton’s enclave in the Biltmore Hotel, where he also runs The Betterment.

The Biltmore has transformed its covered courtyard, once used for pick-ups and drop-offs, into a “lush oasis” that seats a surprisingly large number, interspersed with shrubbery and objet d’art.

We visited on Friday evening and it was bustling, filled with well heeled Mayfair diners starved of their Champagne and steak for too long. Cafe Biltmore is a slick operation, a far more pleasant place to spend an evening than you might imagine from what was once, presumably, a fairly utilitarian slice of land.

The food lands somewhere between “international hotel” and “gastropub”, but comes with the seal of quality that Jason Atherton has managed to uphold as his empire expands. We started with crab on toast, which felt like a proper treat after the best part of a year without fresh seafood; and grilled chicken salad, which is so generously portioned it could probably function as a main.

For mains we went for monkfish curry, which was fragrant and generally delightful save for being served in a cocotte, which looks nice but is a pain to eat out of; and a more recognisably Athertonian cod and crushed potatoes. In the name of journalism we also ordered a pizza, which we can confirm is excellent but should under no circumstances be ordered alongside two main courses. We couldn’t stomach dessert after all that but the molten cauldron of chocolate and ice cream devoured by our guest vanished almost immediately.

Cafe Biltmore isn’t going to blow you away with the meal of a lifetime, but that’s not really the point. It’s the kind of food that’s perfect for catching up with people you probably haven’t seen in months over a reliably good, casual dinner. That it’s also relatively reasonable for Mayfair prices and has the wine cellar of a proper central London hotel should seal the deal.

To book go to the Cafe Biltmore website here.