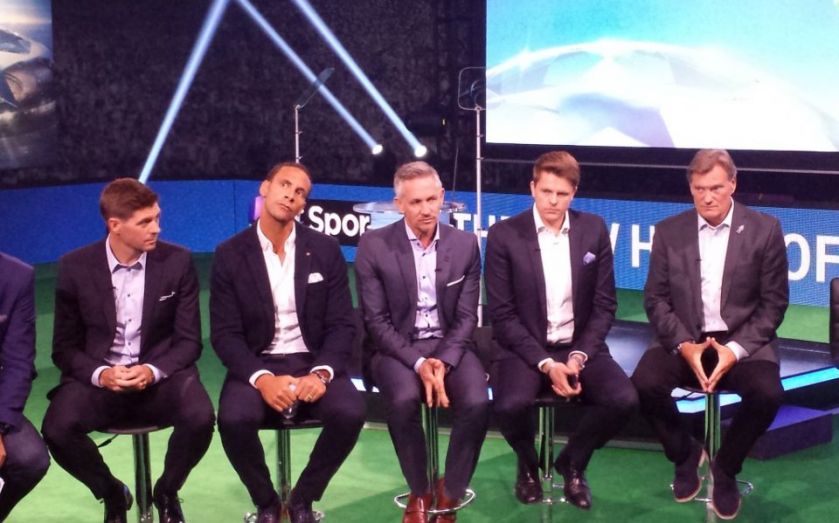 BT has launched its Champions League coverage, pouring cold water on the attempts of its main rival, Sky, to diminish the significance of winning the exclusive rights to European football.

Sky has being trying to play down its loss of the rights to show Europe's premier club competition ever since its destination was announced more than a year ago. It is fair to say that the BT figures at today's event were none too impressed with their rival's opinion that Champions League coverage is not important.

Many also believe Sky paid such a high price for Premier League rights as it was scared of losing them, as well as the Champions League.

BT's ambitions are not small either, as shown by the high-profile signings of Gary Lineker, Steven Gerrard (who will broadcast, on occasion, live from Los Angeles) and Rio Ferdinand. "I think in a year we could be the biggest sports channel in the UK," presenter Jake Humphrey said at this morning's launch event.

Your @btsport #ChampionsLeague presenters. Between us we scored 48 goals for England… pic.twitter.com/aM1bOJ2ng7

Chelsea boss Jose Mourinho was also a surprise guest at today's event, and will be another high profile member of BT Sport's on-screen team.

The company is making an ultra-HD channel, with a 4k resolution, available on its BT TV box. That service, and high definition will not be available unless a customer has bought BT TV. The same is true of its BT Goals service, which will show all the goals from European matches as they are scored.

Customers who access BT Sport via a Sky set-top box will not be able to watch anything but the main channels in high definition either. All the games accessed via the red button will be in standard definition. There will also be no additional functionality, such as in play statistics, on anything other than BT TV.

Executives at the firm told City A.M. the BT TV product, hooked around its Champions League and Europa League coverage, is the best way to tie together BT's broadband and television offering.