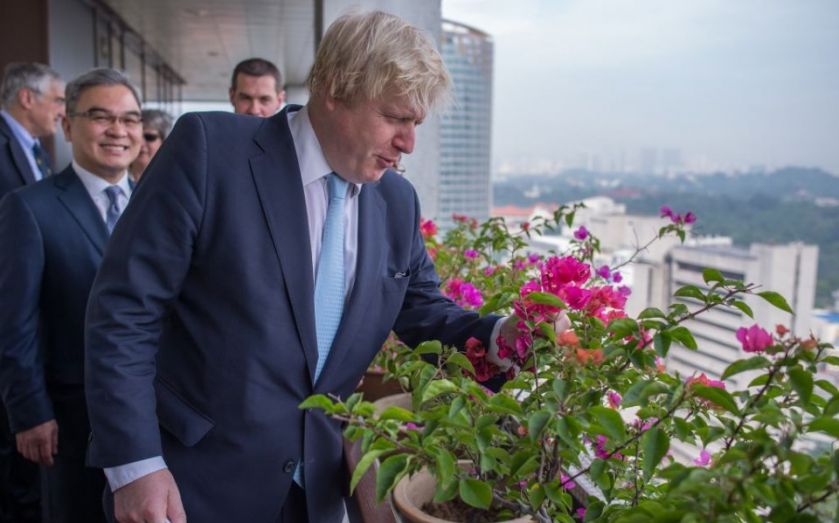 London Mayor Boris Johnson may be used to a political dust up, but he was faced with what sounds like a rather more physical session on his flight home last night.

Johnson, who has been in Malaysia as part of a tour of Asia, was flying from Kuala Lumpur when a fellow passenger started to get violent.
Tweets posted by tech VC Eileen Burbidge, who was part of the delegation, show cabin crew restraining the passenger “who was off his head”.  She added there had been a “head butt incident”.
https://twitter.com/eileentso/status/540023062381731840
https://twitter.com/eileentso/status/540027342136299520
According to the BBC, passenger Tom Oakes said the man was "racially abusing staff, clearly drunk and demanding more drinks."
Mr Oakes said: "They warned him three times and yet he was aggressive… At this point 6 crew pinned him down, cuffed him, tied his legs and strapped him in a seat.
"The man calmed down and started to sober up. However he was still belligerent and at one point rolled down the aisle with his hands in cuffs.
"The Mayor laughed the incident off and congratulated the crew for their work, which was excellent."
Sadly Johnson is yet to tweet his own description of the events.
But his office said: “The Mayor along with a number of other passengers and members of the cabin crew did make several attempts to calm the gentleman concerned but to no avail.”
"We understand the gentleman was restrained by the crew and detained by police on arrival at Heathrow."
At Heathrow the passenger was taken off the plane by six police officers.
A Met Police spokesman said the man was arrested on suspicion of being drunk on board an aircraft and common assault. "He was taken to a west London police station where he remains in custody," the spokesman added.