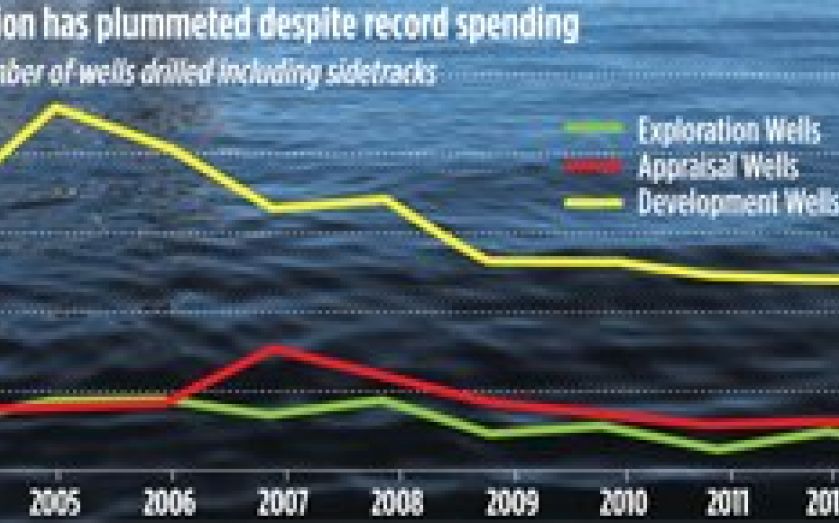 THE UK oil and gas industry is facing its biggest challenge in 50 years due to a steep decline in exploration, according to a new report.

In its Activity Survey 2014, industry body Oil & Gas UK cites government figures that show only 15 exploration wells were drilled in 2013, down from 44 in 2008. Taken together, the last three years have seen the lowest rate of exploration activity in the history of the UK Continental Shelf (UKCS), the report warns.

The figures deal a blow to Scottish first minister Alex Salmond, who has put the country’s oil industry at the heart of his indpendence campaign.

“Even if currently planned wells proceed, the rate of drilling is still too low to recover even a fraction of the estimated six to nine billion barrels yet to be found,” said Malcolm Webb, chief executive of Oil & Gas UK. “Britain’s waters contain an abundance of oil and gas yet to be found and it is critical we find the means to turn the current state of exploration around.”

Despite the slump in exploration 2013 also saw record investment of £14.4bn into UK oil and gas, leading the report to call for a major overhaul of the current tax regime. “The stream of new field allowances introduced over the last few years have been helpful in enabling investment,” said the study. “However, the overall fiscal regime for the UKCS is increasingly seen to be overly complex, burdensome and uncompetitive – and hence in need of a major overhaul.”

The report comes hot on the heels of Sir Ian Wood’s review into how to maximise UK North Sea resources, which calls for a new regulator. Wood said the report’s suggestions would boost the UK economy by £200bn over the next 20 years.

“Government is implementing Sir Ian Wood’s recommendations and we will be looking to work very closely with industry to maximise the North Sea’s full potential,’ said a government spokesperson.