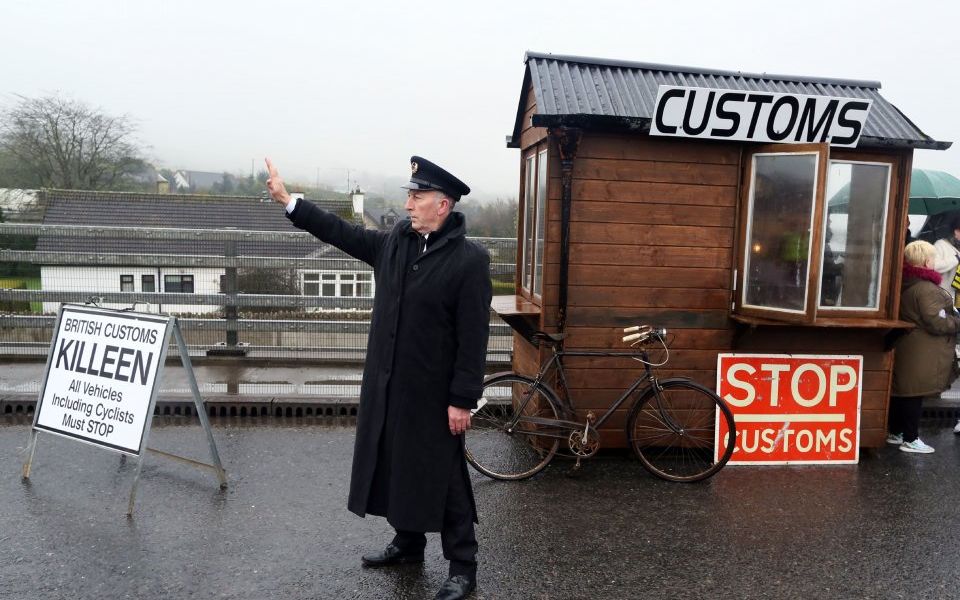 With less than six months to go until Brexit, one of the biggest sticking points in the negotiations between Britain and the European Union remains undoubtedly the issue of the Irish border.

If the UK does decide to leave the EU’s single market and customs union, it will become necessary to control and monitor goods moving between the Republic of Ireland and Northern Ireland.

As health and safety requirements and regulations will likely diverge over time, neither the EU nor the UK would want goods that don’t meet their standards slipping into their markets via the border. There are also concerns that the border will be used to try and avoid paying customs duties and taxes.

Read more: Theresa May hits back at Boris Johnson in Brexit row at Tory conference

But the question is: how do we solve this border issue? A hard border between the two Irish states is out of the question. The EU doesn’t want it, the UK doesn’t want it, and the Irish certainly don’t want it, due to fears it would reignite sectarian violence and shatter the peace that has existed since the signing of the Good Friday Agreement in 1998. Thousands of people freely cross the open border everyday, and goods and services are easily exchanged, thanks to the lack of restrictions that are currently in place.

Another solution is to keep Northern Ireland aligned with the EU’s rules, but this would effectively place a border across the Irish Sea and break up the UK’s own common market. Prime Minister Theresa May has publicly rejected such a proposal.

Various other ideas are being put forward to try and create as frictionless a border as possible, such as using “trusted traders” or linking customs declarations with vehicle registration numbers. The former foreign secretary Boris Johnson has even suggested building a 22-mile bridge costing £15bn between Northern Ireland and Scotland. Some solutions have been criticised because the technology required does not yet exist.

However, one piece of technology that is being proposed as a solution – and has the advantage of actually existing – is blockchain.

While most commonly associated with the digital currency bitcoin, blockchain can be applied to all sorts of problems. It works like an electronic ledger that is publicly distributed among many users in order to create a secure data trail, which cannot be tampered with.

In the case of bitcoin, blockchain is used to record every single transaction that has taken place, meaning you could trace a single bitcoin each time it traded hands, right back to the point it was made. Blockchain’s attributes make it perfect for managing a supply chain, and since the technology became prominent, several industries from finance to farming have explored how to best use it.

Tech expert Oscar McCarthy, an associate partner with management consultancy Avantage Reply, tells me how blockchain could help with the Irish border.

Last year, his company published a white paper exploring how the technology could be applied to Brexit, citing examples such as the diamond industry using blockchain to track every jewel from the point it was mined, or the Port of Rotterdam using it to track container shipping cargo.

“The technology allows multiple users within a particular ecosystem to see at what point you are in the supply chain,” says McCarthy.

“If you think of a shop and a factory which regularly do business with each other, this allows you to keep an up-to-date inventory review on both sides.”

This inventory network could be scaled up so that any number of parties could add to it and review it.

“Blockchain allows you to monitor in real time the state of readiness of a particular shipping or product or good, whatever it is. It’s a tool for supply chain management.”

In effect, when a product is made or arrives on one side of the border, its label could be added to a publicly-accessible blockchain, showing who sent it, where it came from, and so on – the customs declaration is submitted electronically before the goods even arrive at the border. Once it arrives at its destination, it would be scanned again and its blockchain record updated.

Rather than checking every single shipment at the border, algorithms could be designed to decide which shipments should and shouldn’t be checked, or customs officers could arrange to check suppliers and retailers periodically. In fact, officers could decide to do inspections at any point along the supply chain – they could visit a retail outlet, scan labels to see a product’s blockchain record, and confiscate goods that break the rules.

“The key advantage of the blockchain approach is it allows checks to be done at any one of multiple places – it doesn’t have to be done at the border crossing. It could just as easily be done at the warehouse, retailer, or point of departure,” adds McCarthy.

“This takes away the pain of checking precisely at the border, and it allows parties on both sides to build trust. They are transparently providing information and making it visible.”

Another advantage of blockchain is the use of smart contracts – automated processes that verify or enforce an agreement once certain conditions are met. Smart contracts could ensure that customs duties are paid as soon as a product has crossed the border, which would help to build trust between both sides, and reduce the need for significant infrastructure along a hard Irish border.

However, blockchain is not a perfect solution. “Is the technology ready for 100 per cent roll-out where everyone can do it? No, that’s getting ahead of ourselves,” says McCarthy, adding that first there would need to be several pilot programmes run to prove how it would work, and major suppliers and trade routes would need to be identified. It would require potentially months of work – if not more – before it could actually be implemented.

“This isn’t the silver bullet that will solve every problem and is ready tomorrow. That’s not the real world, but equally there are places where it’s already starting to be used.”

From a business perspective, the Irish border issue at its core is a question of logistics. How can goods move across the border as easily as possible? With this in mind, blockchain looks well suited to dealing with logistical problems – it’s adaptable, it’s already being used elsewhere in the world, and its an open-source and shareable system, which means it can help to build trust.

If there’s anything that’s needed in Brexit negotiations, it’s a little more trust.

Read more: Plan to keep all of UK in EU customs union after Brexit welcomed by Dublin