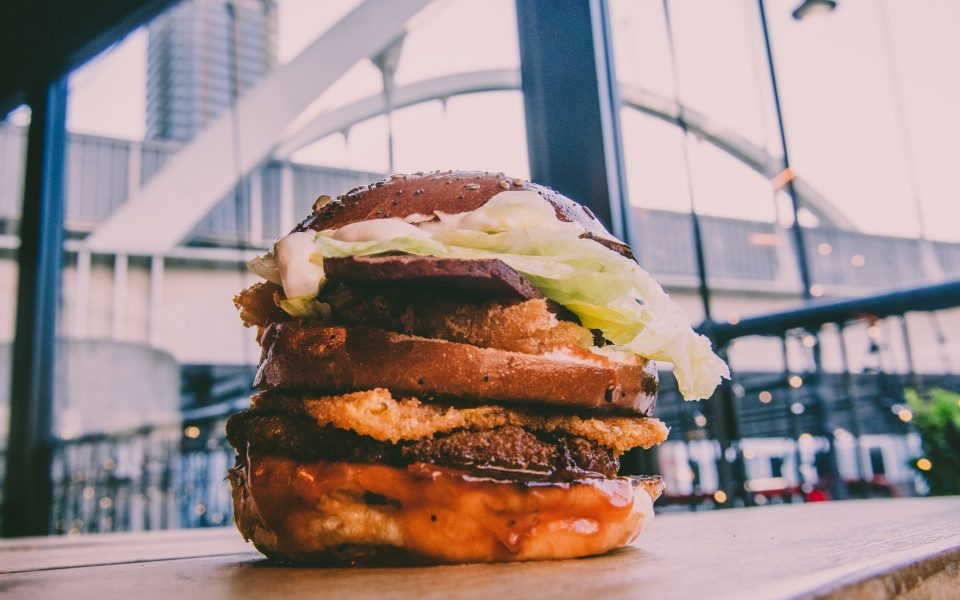 Vegan food is at the literal bleeding edge of culinary science, but before there were heme-infused burgers, pea protein mince and steaks made of specially cultivated soy chunks pounded into the vague shape of a cow by a man in a lab coat, there was the humble jackfruit.

The flaky, stringy, melting flesh of the jackfruit is one of the most versatile things ever to fall out of a tree, and as well as famously making a decent stand-in as pig-friendly pulled pork, it’s also found applications as a meatless alternative to beef patties. Now, at Biff’s Jack Shack, we’ve reached a brave new frontier of vegan science. The jackfruit wing.

BUT HOW? It’s a deep fried nugget of jackfruit with a sugar cane stick running through it like a bone, so you can pick it up at both ends and have at it with your teeth. A highlight is the one slathered in buffalo hot sauce, vegan blue cheese and spring onions. Another is the one dripping in a gorgeous, sticky bourbon-infused BBQ sauce, but order a flight of them to sample as many varieties as you can.

WHO? Co-founders Biff Burrows and Christa Bloom started selling filthy vegan burgers out of the back of a van in 2017, before moving into a permanent spot in Shoreditch’s Boxpark a year later, and into Walthamstown and Homerton after that.

WHERE? It’s a food counter inside a Spar, surprisingly enough. But not just any Spar, a really fancy Spar around the corner from Homerton overground station, where they sell kombucha and lentils by the gram. East London is living up to its reputation.

ORDER THIS: The Jack Bauer Tower of Power is a tall and greasy conglomerate of two crispy jackfruit patties, deep fried vegan cheese, potato rosti and fake bacon. It’s the kind of burger you think about occasionally, days after you’ve eaten it, and with mixed feelings of desire and shame. It is a dirty, sweaty stack of heart disease that requires half a rainforest’s worth of napkins on hand, and puts paid to the idea that a vegan diet can’t be just as grotesquely indulgent and as any other.

NEED TO BOOK? As its inside a Spar, no. There’s not much seating at the counter though, so consider getting a takeout or ordering online. Visit biffsjackshack.com