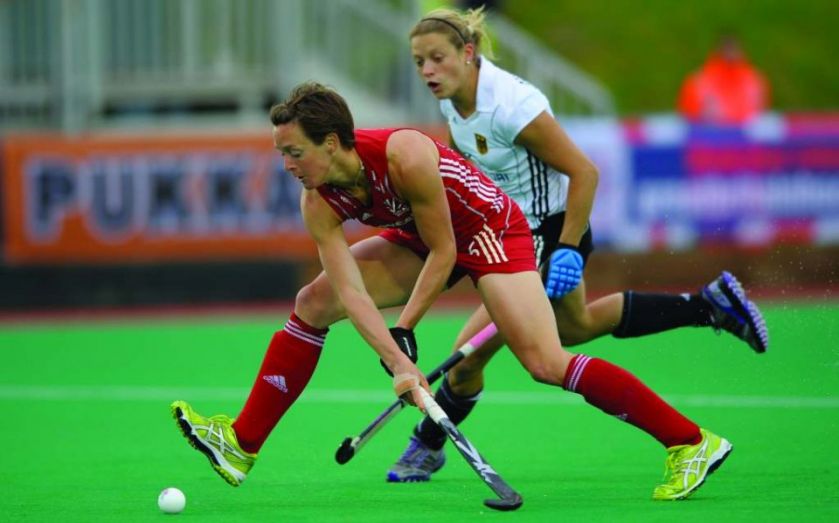 Sitting down for an interview wasn’t easy for Hannah MacLeod. Not because she is busy (though she is), but because she’s currently suffering from “a couple of broken ribs”. The Olympic Bronze medallist shrugs it off – it “comes with the job” – but playing hockey for Great Britain isn’t the only one she has. She is the co-founder of A Word On Nutrition, a web and consultancy business which provides expert health and nutrition advice for athletes, sports teams, companies and the general public.
“Only four or five of us out of a squad of 31 have jobs outside of playing. Sometimes you look at the others with a bit of envy!” But MacLeod wouldn’t have it any other way. Having spent seven years at university, completing a PhD in physiology, she was “adamant” that she wanted to pursue a career aside from hockey. So in March 2012, she set up A Word On Nutrition with partner Nick Morgan.

The pair met while at GlaxoSmithKline, where they both worked as sports science experts for Lucozade. “It was extremely well funded, but it was branded. You were limited in what you could say, and we were speaking to a huge number of people. There are still very few impartial resources on sports nutrition and health more widely; there is so much fluff out there. We both had very similar ideas on nutrition.” Over the past two years, they’ve built up the advisory side of the company, using freelance consultants to help with the workload, and have developed a website crammed with free information and guidance – from recipes to advice around certain health conditions. Its partners today include Breast Cancer Care, Brighton Marathon, Runners Life and the Soto Tennis Academy. Recently, they worked with a magnesium firm that mines off the coast of the Netherlands, which “wanted to know about the UK market and how people felt about magnesium supplements”. Finally, an ongoing project with Jenson Button’s physio Mike Collier will see them provide all the written material for a nutrition app pitched at businesses.

Now, the key for MacLeod and Morgan is building corporate relationships and widening their appeal. Currently, their audience is “eclectic”, but it is predominantly within the 18-35 age category, with more females than males – “we’re finding a lot of students use us too for project work”. MacLeod starts training for the Rio 2016 Olympics in August – and the pair need to decide how to grow the business alongside that. Mindful eating is something they’re interested in – the idea that taking time before and during eating to consider your food can have physical and mental benefits. “It’s such a basic but effective idea – there’s a degree of common sense to it. Taking 10 minutes longer to stop and think does no-one any harm.”
The pair also need to make more of social media to take their message further. “There are possible investment streams there” – getting it right will “enable us to work more with the general population. Most people don’t exercise every day. That makes what they eat on rest days really important. There’s a lot we can offer in that area; it’s where our time will be best spent.”

Given MacLeod’s sports schedule, it’s any wonder that she makes time for anything else. And now, the GB women’s hockey team are working harder than ever: they secured their place at the Olympics in January, and two weeks ago, they lifted the World League title, beating China 2-0.
MacLeod is fortunate that she’s got in Morgan a business partner who “completely understands elite sports” – he is a sportsman himself, and a frequent Iron Man participant “and other mad things like that”.
With much of her role in the business involving writing, MacLeod often works remotely, squeezing in a few more hours “while others are watching boxsets of Scandal”. Yet for a professional athlete, entrepreneurship can prove a more satisfying path than getting a job. Now, as an older member of the squad (captain Kate Richardson-Walsh is the eldest at 35), MacLeod has seen the retirement journeys many colleagues have taken. Olympians are “very well looked after” when it comes to future job prospects. “We have an adviser the whole way through. It’s ensured that you get qualifications if you want them. The sports world has fantastic relationships with companies and being an Olympic athlete is something employers quite like.”
But while moving between one world and another might be “practically really easy”, it’s “emotionally really hard,” explains MacLeod. “For many people, you’ve gone from being one of the best in the world to being slightly older than everyone else and at the bottom of the pile. There’s an acknowledged level of respect in sport, and that’s not quite the same in reality.”

See Hannah Mcloed and her GB team mates go for Gold at the Unibet EuroHockey Championships at The Queen Elizabeth Olympic Park this August. More details at Eurohockey2015.co.uk