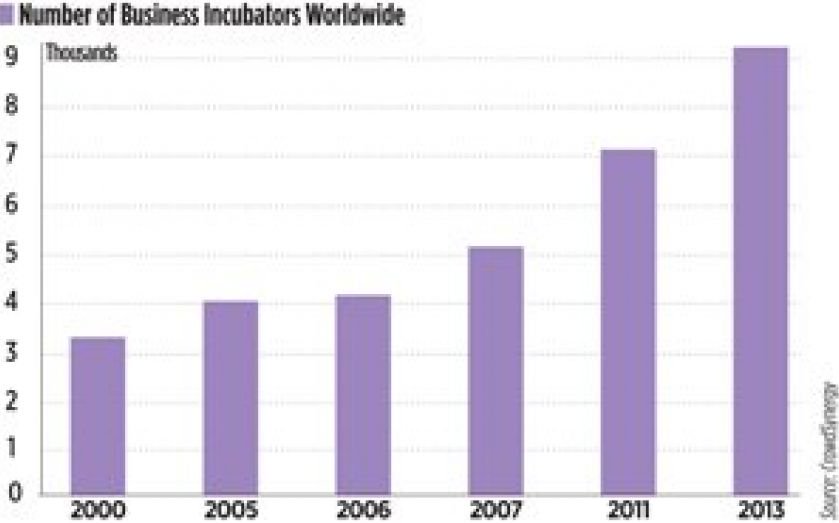 But picking the right fit for your company is vitally important

THE THRIVING London startup scene is set for another boost. Microsoft recently announced plans to launch a new gaming-focused accelerator programme, while Tesco is due to fund the Rainmaking Loft – a tech incubator in St Katherine Docks.

Incubator programmes provide startups with business support and working space in their early stages. According to data spanning the last 12 years from the UKBI (a professional body for incubators), they increase the success rate of small businesses from 30 per cent to 98 per cent. Accelerators such as Wayra, Seedcamp and TechStars, meanwhile, usually take a small slice of equity (between 5 and 10 per cent) in return for seed funding and an intensive development programme. TechStars says that 50 per cent of its cohort close major funding deals by the end of the scheme.

BUSINESS SUPPORT
“The core function of incubators is to provide business advice and mentorship,” says Kirsten Bound of the innovation charity Nesta. For entrepreneurs with a background in engineering or coding, marketing and business strategy can be relatively alien. Jim Shaikh, founder of yoomi.com says, “Knowledge Dock (an incubator based in the University of East London) gave me access to management consultants, marketing experts and IT support that would have cost thousands outside of the programme.”

But the type of advice provided can vary enormously according to the particular incubator or accelerator. “As the number of incubators has increased in the last decade (see graph), so has the range of different models offered,” Bound says. “The needs of a biotech firm will be vastly different to those of a retail startup, and entrepreneurs should bear this in mind when choosing an incubator or accelerator.”

FORGING CONNECTIONS
“The importance of networks can not be underestimated in the startup business,” says Eze Vidra of Google Campus. Incubators and accelerators give startups the chance to build contacts, and allow the exchange of ideas between companies. “Not only was it invaluable to have the support of peers on the TechStars accelerator,” says Moni Technologies’s chief executive Laurence Aderemi, “we also found that those of us with similar business needs could often approach suppliers and distributors together, reducing costs.”

FUNDING OPPORTUNITIES
According to Peter Harman of the UKBI, “incubators and accelerators have access to investors that are difficult to reach as an individual startup.” As well as offering seed funding, many programmes also help firms make contact with major investors. The accelerator Wayra, for example, provides up to €50,000 (£42,250) of initial funds on acceptance. Upon completion, all business are automatically assessed by a venture capital (VC) group for investment. Seedcamp, meanwhile, flies its cohort to Silicon Valley to meet major VCs and angel investors.

Such programmes are highly competitive, with Wayra UK selecting 17 from 3,444 applications this year (its first in the UK). But for the lucky few, accelerators and incubators can raise the chance of success.