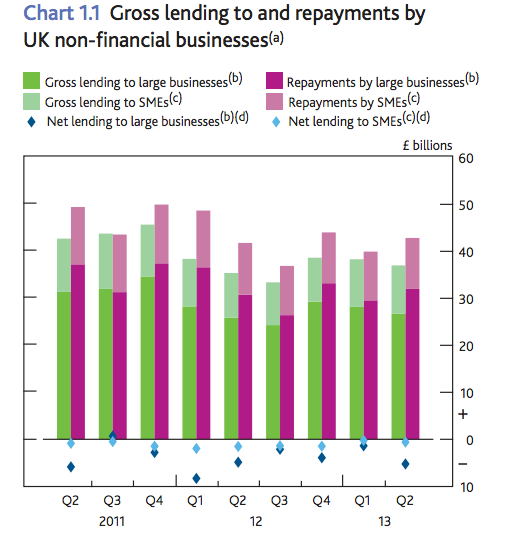 The Bank of England's latest Trends in Lending survey shows that, whilst bank lending to businesses in the three months to August fell, mortgage approvals for households rose markedly. So did lending to individuals. (Release)

Howard Archer of IHS Global Insight says that "this suggests the Funding for Lending Scheme (FLS) has to date had limited impact in supporting bank lending to companies. At best, it appears that FLS may have stopped lending to businesses from falling more than it has.

With several big lenders still in the middle of restructuring their balance sheets and slimming some non-core assets, Archer adds that "in particular, several lenders have been reducing their exposure to the commercial real estate sector". He continues:

Weak lending to businesses reflects demand as well as supply factors and it is evident that a number of larger companies are looking to alternative sources to raise capital.

Furthermore, many companies are looking to pay down debt. It is also likely that a number remain wary about borrowing given the economy’s prolonged weakness before the recent pick-up in activity.

Net lending to individuals rose by £2.9bn in the three months to August, and at a faster rate compared to the first half of 2013. Archer comments that this was "largely due to higher mortgage lending, which was clearly helped by the first stage of the government’s Help to Buy initiative that started in April, as well as FLS."

The availability of credit to businesses was slightly up in the quarter, with the expectations that there would be another small improvement in the fourth quarter, with availability of credit to small companies predicted to rise noticeably. Archer says that the improved economic climate may be making smaller firms "look more attractive as lending prospects" and "may be a sign that the extension of the Lending Scheme in April to particularly encourage lending to smaller companies is starting to have some impact."

It is "vitally important", says Archer, that, as demand for credit does pick up – assuming the UK can maintain a reasonable level of economic activity – "all companies who are in decent shape and who do want to borrow – whether it be to support their operations, lift investment, explore new markets – can do so, and at a non-punishing interest rate."