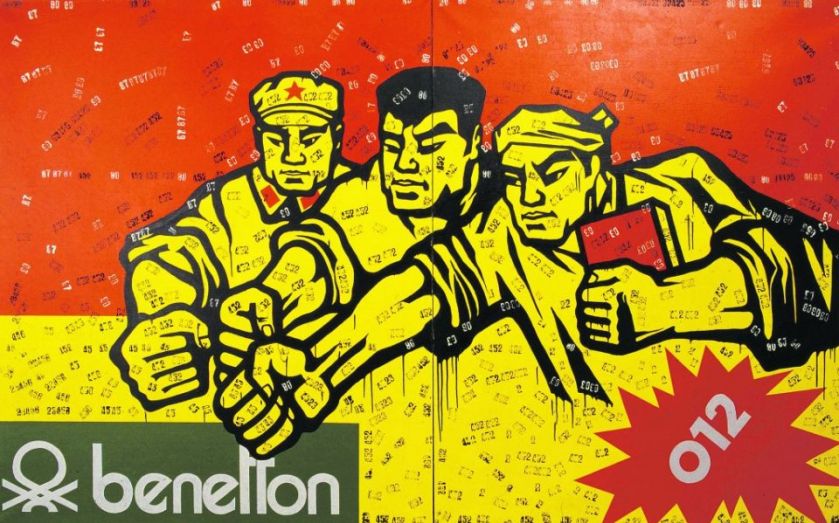 Saatchi Gallery | ★★★★☆
“Have you sold your soul, have you sold your soul, have you sold your soul?” It’s hard to imagine the current crop of Turner Prize nominees making a statement as baldly political as this. While the art of the moment seeks refuge in the obscure, the artists in the Saatchi gallery’s latest show hurl themselves into the world of the familiar. The iconography of capitalism is stamped all over Post Pop, to the extent that it starts to feel like a teenager’s bedroom, every wall emblazoned with garish, ironically invoked logos.
So, what exactly is “post pop”? Sometimes it just feels like a more extreme version of pop (pop gives us icons, post pop gives us them with their tops off), but the exhibition makes a convincing case that pop art spawned a media-saturated, overtly political visual language that united Western and Eastern artists.
The irony is that the attempts to shock often come across a little quaint. To ask “Have you sold your soul?” seems naïve . “Die Harder” and “Piss Christ” – two less than pious takes on the crucifixion – channel a kind of unarticulated teenage rebellion, a reflexive kicking out that has a visceral impact but fails to score any political points.
In “United Nations” Chinese artist Gu Wenda makes all the world’s flags out of human hair. It’s hardly subtle, but you can’t help admire the earnest effort that’s gone into it or be stirred by the strange atmosphere of the room in which they hang.
It’s this willingness to favour impact over sophistication that makes the work so winning. Post-pop means potency, and in the current climate of obscurantism and beardstrokery, that comes as a relief.