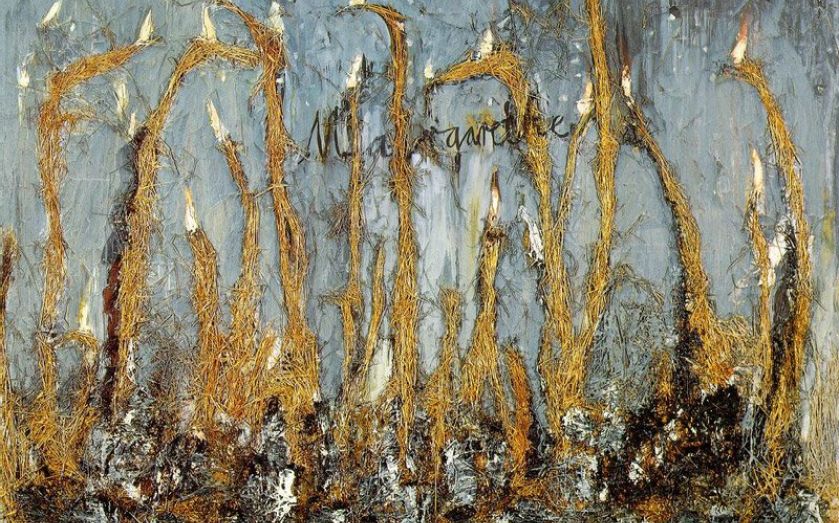 A distant, solitary figure stands before the sea, arm raised in a Nazi salute. The title of the painting: Heroic Symbol. Ironic? Well, yes and no. For though Anselm Kiefer was no Nazi, there is genuine heroism in depicting this image, in recalling the past from the chasm of silence into which Germany fell in the years after the Second World War.

Born in 1945, Kiefer was obsessed by Germany’s recent and ancient history. His paintings and sculptures of lead, ash, straw and clay served as a muscular articulation of German post-war anxiety as well as a practical answer to Theodor Adorno’s assertion that there could be no poetry after Auschwitz.

It wasn’t only the Nazism’s evil that Kiefer faced up to, but the humiliation of its defeat. German romanticism and folkore abounds with tales of heroism and victory against the odds. Parsifal defeats the knight Ifer. Germanic tribes halt the advance of the Roman general Varus. But look at these German officers in “Operation Sea Lion”, deludedly plotting an invasion with bath-toys, the rest of the world about to envelop them. The past Kiefer dares to remember contains emasculation as well as murder.

Paintings such as “Ashflower” and “To an Unknown Painter” depict more recent monuments of German power, the architecture of Albert Speer. The sober columns and vaulted ceilings look haunted until you realise the ghosts are the buildings themselves, colossal apparitions of stone, refusing to be forgotten.

Kiefer’s paintings also have a noble architecture, rendered in materials that decay, crumble, morph over time. Perhaps his greatest muse is lead: entranced by its malleable, alchemical qualities, he used it to make sculptures of books, jamming them into massive snow-covered landscapes (“Ash Leaves”) making them protrude like greenish, raggedy tombstones.

Tied to this ashen past, Keifer finds redemption by looking skyward. In The Orders of the Night he paints himself prostrate on the ground looking to the heavens while sunflowers painted in black droop and tower over him, linking his body to the sun and earth, past and future.

These serious, deeply moral artworks reach for a truth ignored by most contemporary artists. They’re proof, as if it were needed, of Kiefer’s status as a true German hero for modern times.